Fort vijaygad, situated amongst the hills of lahol spiti is renowned for its artistic and cultural contribution.

Ten kilometres away from this fort is a village rocking on the swings of nature’s green abandance. Here live the lovebirds, Pooja and Suraj. Choudhary pooja’s father and lala kedarnath suraj’s father were committed to have their wards married, however both the mothers were daggers drawn.

Fortunately for the lovebirds help comes in the form of cbi officer Amar who growing fond of the couple, pressurises Pooja’s mother to set them free.

Amer has been sent to vijaygad on a special investigation mission. It is suspected that the vijaygad fort is the centre of illegal activities masterminded by prince roni in the absence of the Rajasaheb away in the states. Meanwhile Pooja’s mother finds out that vijaypratap, the match she had selected is an asp. Amar’s threat is no longer a fear and she locks Pooja up planning an immediate wedding in the absence of both the features. Desperate, Pooja leaves her house and reaches suraj’s house only to be insulted and thrown out by Suraj’s mother.

In the same night Amar has managed to enter the fort and collect the proof unfortunately the prince realises that there is something amiss and sends out his henchmen. Amar  escapes from the fort. On his way he meets Pooja, who hurt and lonely wants to commit suicide. In his effort to stop her he loses valuable time and the goons catch up on them. Pooja witnesses CBI officer Amar’s brutal murder. Suraj reaches there to see Pooja being whisked off to the fort.

Fortunately for Suraj,  Rajasaheb arrives and hearing Suraj’s pleas, Allows him inside the fort to search for Pooja. The prince is perturbed but has to bear up in the presence of the Rajasaheb.

Dawns the day, eagerly awaited by Prince,of Raja’s farewell, when he could easily wipe away Suraj and lay his hand on pooja. But the sudden arrival of a notorious smuggler don D.V. in Raja’s farewell party turns the table. Princes ‘s plans are jinxed, Don D.V blurts the truth about the prince and his accomplices, Raja cancels his departure to come to the core of the fact.

The same night Suraj gets access to Pooja he takes her straight to Rajasaheb, but reaches there to witness his gruesome murder.

High – rise walls in front and shadows of death behid. The escaping lovers could Suraj and Pooja succeed in escaping or are they trapped again the jaws of Death. Hold your breath. See ‘Qaid mein hai bulbul’ for the answer. 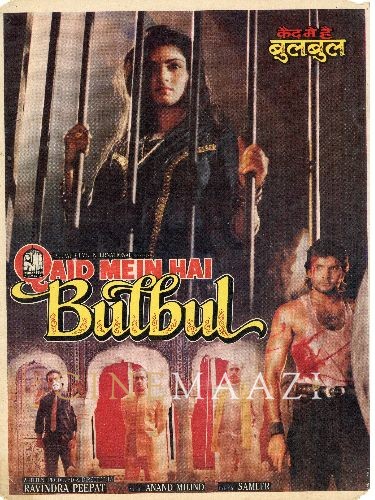