Ravi, Appu and Valsala are members of the renowned ‘Thamarasserry’ family in Kerala. On Valsala’s wedding day, the bridegroom Vijayan is arrested by the police on charges of murder.

Ravi leaves for Madras in search of a job. Doctor Easwara Pillai is a rich businessman in Madras, and was once a dependent of the Thamarasserry family. Pillai drives Ravi away when he approaches him for a job. His daughter Kanchana falls in love with Ravi, and with her help, he finds work at a private bank.

Mohan, an associate of Pillai, plots to swindle his wealth. He introduces his friend Vahini to Pillai, and he is soon a puppet in her hands. Vahini schemes to separate Kanchana and Ravi, so Kanchana is married to Mohan instead and he can lay his hands on her father’s wealth.

Vahini manages to bring Valsala and Appu to Madras by sending them a letter in Ravi’s handwriting. She also sends Pillai to the hotel where Valsala puts up, and Pillai attempts to molest Valsala. A masked man intervenes and vanishes after he has rescued Valsala from Pillai.

Vahini pressurizes Pillai to get Kanchana married to Mohan. As a result of Vahini’s machinations, Ravi loses his job. The masked man appears again to save Ravi’s life when he attempts to commit suicide. Pillai is finally informed of Vahini and Mohan’s deeds by his faithful servants Muzhuvan and Sammatham. The masked man reaches to save Pillai’s life when Mohan tries to murder him. It is revealed that the masked man is none other than Vijayan, who escaped prison in order to prove his innocence. The culprit turns out to be Mohan and he is subsequently arrested. Kanchana marries Ravi, and Valsala weds Vijayan.

The film introduced an array of stage artists to Malayalam cinema including Paravoor Bharathan, Kaalaakkal Kumaran, Kuttappan Bhagavathar and lyricist Swami Brahmavrathan. The hero of the film, S.D. Subbiah, was a Tamil actor.  The storyline of the film resembled most Tamil and Telugu films of that period. However, the film was not very successful. 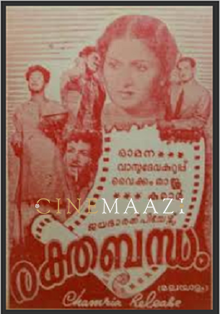