Sakuntalai is the story of the mythological queen Sakuntalai of the epic  Mahabharata and dramatised by poet Kalidasa in the play ‘Abhijñanasakuntalam’.

Subbulakshmi and her husband T. Sadasivam formed Royal Talkies to produce their own films. They decided to make a movie based on Sakuntalai’s life and approached director K. Subramanyam to direct the film. Subramanyam could not oblige because of prior commitments and recommended the name, Ellis R. Dungan.

Dushyanta (G.N. Balasubramaniam), king of Hastinapura, goes to the forest for hunting with his friend and younger brother Madhavya (K. Sarangapani) where he chances upon Sakuntalai (M.S. Subbulakshmi), daughter of sage Vishwamitra and Apsara (celestial dancer) Menaka (K. Thavamani Devi), residing in sage  Kanwa’s (Serukalathur Sama) ashram with Priyamvada (T.A. Mathuram) and  Anusuya. Sage Kanwa brings her up as his own daughter. Dushyanta is captivated with her angelic beauty at first sight and wants to have a brief chat with her. He introduces himself as Mithravathu from king Dushyanta’s army and leaves.  The sages at Kanwar ashram seek king Dushyanta’s assistance and security cover to conduct a yagam/ yagna (religious procedure). Keen to meet Sakuntalai again, Dushyanta readily agrees and arrives at the ashram with his army to provide security. Sakuntalai, who was looking for Mithravasu with the king, sees  Dushyanta. Overjoyed that the man she likes is the king himself, she falls in love with him. Dushyanta stays back at the ashram, leaving his country under  Madhavya’s care. As their love grows, he marries her by giving her a ring as a  commitment and they live together happily for a few days. Learning that his mother is unwell, he leaves to his capital, promising to return in a few days to take her to his kingdom as his queen.  Dushyanta’s stay at the palace gets extended due to his mother’s serious illness. Sakuntalai learns that she is pregnant. Sad and preoccupied in the memory of Dushyanta, she fails to notice and neglects to attend to anger prone sage Durvasa (T.P.S. Mani)  when he arrives at the ashram.  Durvasa gets angry and curses her that the person whom she was lost in thought (Dushyanta)  shall forget her permanently.  When Sakuntalai’s friends  Priyamvada and Anusuya plead with Durvasa, he relents with the proviso that when that person  (Dushyanta) sees any object (the signet ring) that he gave her,  he will recollect and recognize her. As Sakuntalai constantly wears Dushyanta’s ring, Priyamvada believes it will not be a problem and expects Dushyanta to promptly recognize Sakuntalai.  On returning to the ashram, sage Kanwa learns about  Sakuntalai’s pregnancy and decides to take her to  Hastinapur to unite her with Dushyanta. Sakuntalai visits the garden with her friends for the last time. The forest angels present her with jewels and garments for her travel. Kanwa conducts a yagam for her journey and renames her Devi.  Sakuntalai leaves the ashram with her mother and some assistants by boat. Priyamvada advises Sakuntalai to keep  Dushyanta’s signet ring carefully (but without revealing the sage’s curse). On reaching Hastinapur, Sakuntalai bathes in a river. Suddenly, the signet ring slips off her finger into the water and a fish swallows it. Without noticing this, she continues her journey to meet the King.  At the palace, Dushyanta has forgotten her due to the curse and does not recognize her. Sakuntalai reminds him of how they got married under the ‘Gandharva’ tradition (by mutual consent without witnesses). When the king is not convinced, Sakuntalai wants to show him the signet ring and is shocked to find it missing. Her ashram associates and mother leave her, stating that they cannot stay at  Sakuntalai’s place any longer and that she has to sort out her issues with the king.  Sakuntalai pleads with the king,  but he refuses to accept any of her statements and accuses her of being a cheat and a prostitute.  Unable to accept this grave accusation,  she falls,  unconsciously calling out  ‘amma’ (mother).  Her real mother  Menaka arrives like lightning and takes her away.  Five years pass by. When the palace servants bring  Dushyanta his signet ring found inside a fish by fishermen  (N.S. Krishnan and T.S. Durairaj), his memories of Sakuntalai resurface. Regretting his harsh behaviour and sorry to have lost her, he sends people to find her. At Lord Devendran’s invitation, Dushyanta travels by chariot to meet him. On the way, Dushyanta stops at Sage Kasiyabar’s ashram, where he sees a boy Sarvadharman aged five playing with a lion cub.  Talking with the boy, Dushyanta is overjoyed on identifying  Sarvadharman as his son and Sakuntalai as the boy’s mother. The boy takes him to the ashram.  Sakuntalai is surprised to see Dushyanta, who apologizes for being under some influence and not remembering her for a few years. She accepts him and the boy unites them both.  Sage Kasiyabar arrives and blesses them. Kasiyabar says that he has named Sarvadharman as Bharathan and that the country will also be called Bhaaratham in the future. 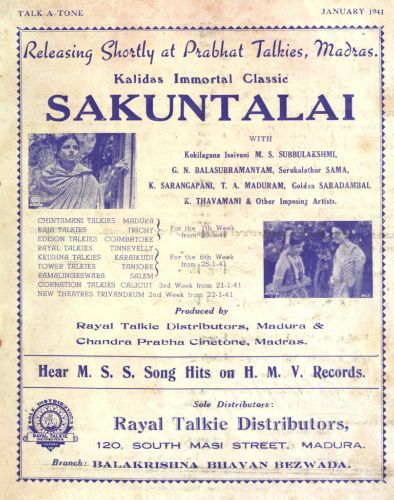 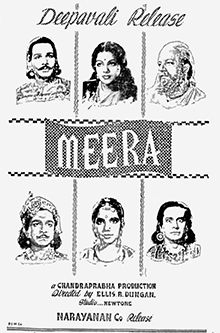