GUMANSINGH, Diwan of an Indian State, is secretly in league with Tunda, the chief pirate, who loots Indian ships, One day Sagar, a young adventurer and his two lieutenants Kaniya and Kanu observe a pirate ship proceeding towards an island belonging to the State. As they walk towards the island, they discover a man who has been stabbed by a dagger and learn from him that Gumansingh is at the back of the pirates' activities.

Bijli, a dancing girl and owner of a nearby inn which is frequented by the pirates, gives all the information about the activities of the pirates to Sagar-her heartthrob.

Sagar informs the Raja of the State about Gumansingh's treacherous activities. The Raja refuses to believe him as Gumansingh is betrothed to his daughter Rajkumari. Sagar is thrown in prison for trying to poison the Raja's mind against Gumansingh. Rajkumari, who has her own doubts about Gumansingh, wants to find out the truth. She goes to the island incognito and cleverly learns everything about Gumansingh and his gang. She narrates her story to her father who invites Gumansingh to court for questioning.

Gumansingh sensing trouble, manages to throw the Raja in prison and installs his own man, who has a perfect resemblance to the Raja, on the Gadi. At the court, the Raja's double finds Sagar guilty and sends him to jail. Rajkumari, who is already drugged, is helpless. Thus Sagar misunderstands her as she does not corroborate his evidence.

Rajkumari manages to escape along with Sagar but she is soon captured by the pirates and taken to the ship. There she is forced to dance to entertain the pirates. Sagar, who is now fully prepared, manages a big attack on the pirates' ship at a time when the pirates are merrymaking. The enemy is taken by surprise and the pirates leave the ship hastily to save their lives. Rajkumari is arrested by Sagar's men while entertaining the enemy and is taken as belonging to the enemy's camp. She is sentenced to death by hanging. Gumansingh offers money for the release of Rajkumari. The offer is accepted and Rajkumari is released. Gumansingh wants to marry her and the wedding ceremony is arranged.

What happens to the real Raja?

Can Sagar and his men save the State from the stranglehold of Gumansingh and his men? 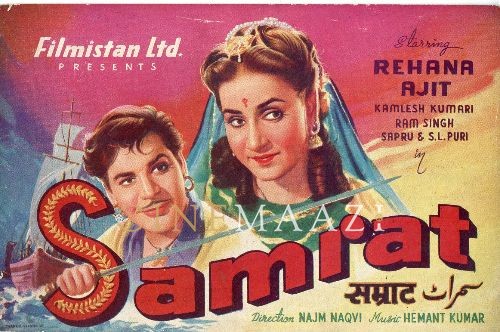