Ammayappan Mudaliar (Visu) lives with his wife Godavari (Kamala Kamesh), sons Chidambaram (Raghuvaran), Siva (Chandrasekhar), Bharathi (Khaja Sheriff), daughter Sarojini (Ilavarasi), and daughter-in-law Uma (Lakshmi), wife of Chidambaram. Ammayappan finds it difficult to manage the needs of his family with his meagre income; his two sons supplement it by contributing to the family kitty. He plans to get his daughter married and invites the prospective groom's family for a prenuptial meeting.

His conceited daughter not only insults the guests but also declares her plan to marry her colleague Peter Fernandez. Though the entire family gets agitated by her decision to marry a Christian, they finally agree with her plan. Ammayappan meets and apologizes to the prospective groom's father who had visited his house on his invitation and whose son his daughter had rejected. Very impressed with Ammayappan and his family, he offers to get his daughter Vasantha (Madhuri) married to Ammayappan's second son Siva. Both weddings take place and the couples settle down. Vasantha finds it difficult to adjust to the new environment. She gets little privacy to be with her husband, as her younger brother-in-law Bharathi, who has failed several times in the school final exam, seeks her help for tutoring and always hangs around her. Unable to cope, she goes back to her parents, only to be sent back with a heavy dose of advice. Sarojini too returns after a fight with her husband as she gives more importance to socializing than her domestic responsibilities. Uma, who is pregnant with her first child, goes to her maternal home for delivering the child.

Chidambaram, who is a tightfisted person, reduces his monthly contribution to the family kitty, quoting his wife's absence as the reason for reducing his share. An argument flares up between father and son. Ammayappan, depressed with his son's stinginess, orders Chidambaram to get out of his house. In turn, Chidambaram demands the money he had spent for Sarojini's wedding and says he would not move out of the house until his money is returned. A line is literally drawn and Ammayappan orders that no one from either side should cross the line or communicate with members of the other side. All adhere to his command. The only person having access to both sides is the servant maid Kannamma (Manorama).

Uma returns with the baby and is shocked by the developments at home. She is sad to see Sarojini back and an unhappy Vasantha. She takes the help of Kannamma and Peter's father Albert Fernandez (Kishmu) to unite Sarojini with Peter and advises Siva to take Madhuri on a sojourn to rejuvenate his relationship with his wife. Though the problems are sorted out, Uma is sad that her brothers-in-law are abiding by their father's order and not talking to her. Kannamma cajoles Ammayappan not to be very adamant and forgive his son. Chidambaram, on the other hand, ends up spending more money for his family after the separation than what he spent when they were together with his father. So he reconsiders his decision to live separately and decides to reunite with his father. However, Uma disagrees as once the bonding is broken for the sake of money, it cannot be fixed again for the sake of money and any bonding should be based on unconditional love. She recommends living separately but on talking terms, celebrating weekends and festivals together as the best way to live peacefully, for which her husband agrees and they follow that in their life. 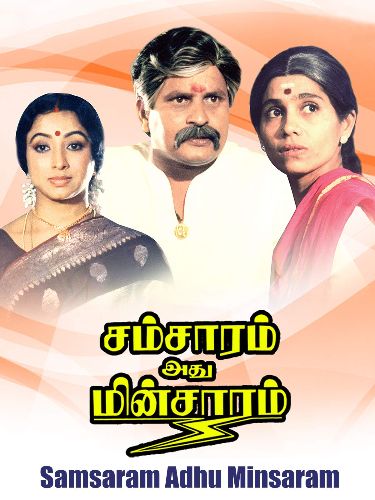