"Santan" or "Adopted Son", unfolds itself on Radha, the loving young wife of Seth Gokul Rai, whose material prosperity, however, offers little consolation to his wife yearning fog consummation of her matrimony. Unable to resist the motherly instinct of the woman in her, she adopts a boy named Pran from an orphanage. As good luck would have it, Radha gets a boy of her own who is named RAMESH and then a daughter Rajni. With the passing years the three youngsters grow up into handsome boys and girl.
Pran: turns out to be a good boy and becomes a doctor. Ramesh, somewhat spoiled by the fondling of his mother, plays the truant and takes to bad ways. Gokul Rai with a true eye for the real stuff cherishes an abiding love for his adopted son Pran and becomes suspicious of Ramesh and his activities. At this stage, on Radha's instance her cousin brother Shyam comes to the house to stay there permanently. A villager, as he was, he soon discovered that he must make much of Ramesh to win his sister's love and confidence. He did this with consummate skill and both Ramesh and his Mama soon became devoted to each' other.

In the meantime, Pran has a chance meeting with a beautiful college girl named Chhaya and feels, attracted to her. Accidental acquaintance ripens into love.

Encouraged and supported by the designing Mama, Ramesh goes ahead with his misdeeds and one day while trying to molest a girl on an open thoroughfare Gokul Rai accidently appears on the scene to find his son involved in a the villain of a Mama immediately betaking himself to a corner. Overwhelmed with shame and anger Gokul Rai gives a smart slap to Ramesh who deals him a deadly blow, of course, in utter ignorance of his identity. With painful efforts Gokul Rai reaches home practically in a state of coma and dies leaving all in the dark except Ramesh and Mama.

Now Ramesh with his Mama, takes a headlong plunge into all the vices that wealth can procure. Words of his misdeeds gradually reach his mother's ears, who decides to get him married. This is done, but without any appreciable result. Knowing as she did, that Pran was an adopted son of the family, Ramesh's wife, Bimla, grows jealous of him and somehow or other manages to convince her husband of Pran's objectionable intimacy with Rajni, who, in truth, was nothing but a dear sister to Pran. One day Pran is openly accused by both Ramesh and Radha of this. He, therefore, walks out of his parental abode and goes to Chhaya to seek counsel and consolation from her. Chhaya,

unfortunately, is in great trouble herself at that moment. Her father, Sunderlal, is in heavy debt and her indebtedness calls for a sacrifice of her personal happiness at the altar of duty. With heart torn with conflicting desires of love and duty Chhaya is compelled to disappoint Pran. Disconsolate with grief he runs away from Chhaya's presence and wanders aimlessly when he meets with a serious accident.

After Pran's walkout from her house, Radha comes to know how her son Ramesh has squandered away the family fortune. In her attempt to check Ramesh she is brutally insulted and thrown out of the house.

The rapid happenings of the next few days bringing this touching human drama to its close are matters to be fittingly projected on the screen, and they are therefore, left unsaid. 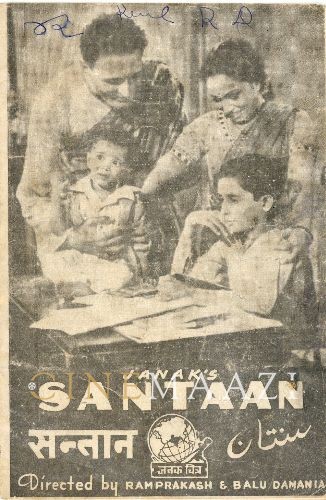