Sevasadanam dealt with marital issues, domestic abuse, prostitution, and women’s liberation. It was of the early Tamil films to advocate reformist social policies.

Eswar Sarma (F.G. Natesa Iyer), a clerk in a pawn shop, is married to Sumathi  (M.S. Subbulakshmi). His widowed sister Gundamma also lives with them and she harasses Sumathi from time to time. Courtesan Kamalesh Kumari (Ram  Pyari) and her young daughter Suguna (S. Varalakshmi) are their neighbors.  Suguna comes regularly to meet Sumathi and they become close. Gundamma’s harassment crosses limits and a depressed Sumathi goes to a garden and spends her time there. When the guard at the garden asks her to leave the place, advocate Padmanabha Iyer (S.G. Pattu Iyer) and his wife Subhadra Devi  (Jayalakshmi), who are present in the garden notice this treatment, scold the guard and take Sumathi with them to their residence. After consoling Sumathi,  Padmanabha Iyer and Subhadra bring her back to her residence. Eswar Sarma gets angry and beats her for going out with strangers.  Once, Subhadra takes Sumathi to her residence, decks her with new clothes and jewels, and Sumathi looks ravishing. Eswar Sarma, who visits them on official work, gets shocked to see his wife in this manner, shouts at her, and rushes out.  At night, Subhadra brings Sumathi back to her residence. When Suguna comes to meet Sumathi and plays pranks on Gundamma, Gundamma assumes that they were done by Sumathi, gets angry and scolds and beats Sumathi, who gets depressed, visits a nearby temple and prays and sings in praise of the Lord.  At the same time, another musical performance by Kamalesh Kumari takes place in the same temple. The attention of the audience gets diverted to the divine singing of Sumathi; everyone rushes to listen to her and all praise her singing. A  few people meet Eswar Sarma and talk to him about her great singing talent.  Sarma becomes more furious with her for becoming a public personality. When  Sumathi returns home late, Sarma beats her on the instigation of Gundamma,  throws her out of the home, and locks the doors. Left with no one to support her, Sumathi seeks shelter for the night and finally falls unconscious before the house of Padmanabha Iyer. Iyer and his wife take her inside and take care of her.

Gundamma misuses the closeness of Suguna with Sumathi and asks Suguna to bring eatables for Sumathi regularly, but eats them herself. One day, she gets caught by Sarma,  who understands the real character of his sister. He is depressed with her heinous acts and leaves the home, looking for his wife.  Gundamma also realizes her mistake, regrets her errors, and roams on the road like an insane person.

Sumathi staying at Padmanabha  Iyer’s residence creates unwanted gossip. So Iyer decides to send her out of his residence under some pretext. Sumathi comes to know of this; to avoid any further embarrassment to him, she leaves his residence and attempts suicide. She is rescued by Kamalesh  Kumari, taken to her home and encouraged to take up singing as her profession. Soon  Sumathi becomes popular as “Kokila Gana” Sumathi and earns wealth and fame.  In the meanwhile, Sumathi’s sister Santha, staying at her uncle’s place, is badly treated by her aunt Janaki. Her uncle Umapathi Sasthri finalizes her marriage. When the bridegroom’s family comes to know that Sumathi is the sister of Santha, they cancel the marriage as they do not wish to get associated with such a family. A depressed  Santha attempts suicide but gets rescued by Sumathi.  The two sisters together start ‘Sevasadanam’, a home for orphan girls and children of prostitutes. Sarma, who realizes his grave mistake of suspecting his noble wife, joins Sumathi in running the orphanage. Gundamma also joins them soon.  Sarma, Sumathi, Gundamma, and Santha become social workers and serve humanity.

It was the first film for Bharat Ratna M.S. Subbulakshmi, the famous  Carnatic classical singer. She made an impressive debut and her songs in this film became immensely popular. 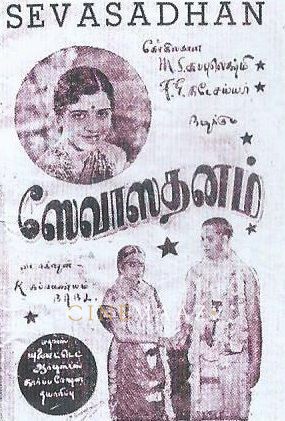 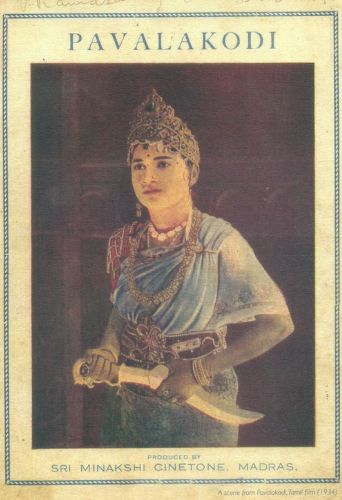