Behind every action of man, there stands the shadow of some woman, and Alamgir, the mighty emperor of Ayaaz was no exception. He was mad after girls. He would promptly promise to marry any beautiful woman he saw. Rukhsana was his latest choice. But as the marriage and hanging go by destiny, Alamgir saw another girl, Hassina, the daughter of Mehran's Amir and promised to marry her. Realizing the fate, if Alamgir really married Hassina, Rukhsana conspired with her brother, Hassan, to get Hassina killed in the way, while he led the royal caravan which brought Hassina to the palace. It was a dark night. Hassan, highly drunk entered her tent with a bare dagger in hand. In the meantime a gang of dacoits attached the caravan and looted everything. Hassan ran away. Hassina was taken into custody. But, Janbaz, the chief of the dacoits, after knowing the facts, promised to deliver her safely to her would be-king-husband. On the other side, Hassan had wrongfully reported to the king that Hassina got murdered in the way. The King was shocked while Rukhsana was happy. But the other day, when Hassina, led by the brave Janbaz, entered the palace gates, in flesh and blood, she and her brother could not believe their eyes. However, they resolved to put an end to her sooner or later and they did their best but with same results.

Having come into close contact with him, Hassina found that Alamgir was a treacherous man. His only ambition to bring her to the palace was to feed his lust. From her very first day in the palace, she began to hate him and felt attracted towards Janbaz who stayed in the palace as Royal Guest and saved her many a time from the wicked intentions of Rukhsana and her brother. Star-lit nights gave them the inspiration and their love thickened. But alas! one night Rukhsana was able to show to the very eyes of Alamgir this play of love and romance. The very moment Janbaz had to vacate the place, leaving his beloved to her own fate. Alamgir bullied her, tortured her and asked her hand of marriage which was too late for her. Summoned her father to the palace and threatened to burn him alive if his daughter did not agree to marry him. Now Hassina had no other choice but to marry him. The royal marriage was announced. However, Rukhsana was not a woman to let things go like this. Without the knowledge of Alamgir she led a caravan to the vast deserts of Mehran and thereby managed to meet Janbaz and induce him for the last act.

One day before the marriage, Janbaz was there in the palace in disguise of an old musician. The very night Rukhsana planned Hassina to escape from the palace but in the nick of time Alamgir got alarmed. Janbaz and Hassina were arrested. Rukhsana died falling from the top of the palace. Hassan revolted against Alamgir. What happened to all of them? See this all in SHAHI MEHMAN. 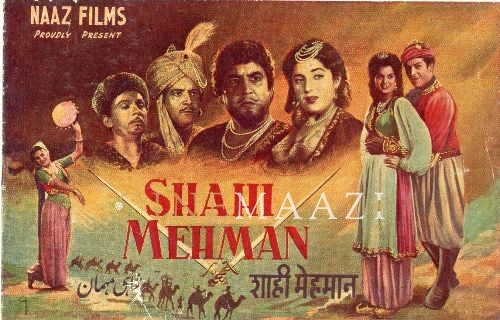