Truth is God and truth is humanity personified - Gandhiji

Vijay, a small-town young graduate who has faith in the aforesaid ideal, comes to a metropolis in search of better prospects. He finds a job in an Advertising Agency. In this business of ballyhoo based on bluffs, he comes in direct clash with Geeta, the charming accounts' executive of the agency. He tells Geeta, who is the daughter of the Managing Director Seth Champalal that the best method for publicity is to tell the plain truth. Thus he creates another enemy in Kishore, the son of Lalchand.

Lalchand, who had already involved Geeta and her father in another partnership business has an eye on his partner's wealth.

He tries to turn the business relations into 'family relations'. One day at a gala dinner, Kishore calls Vijay, a 'native'. Vijay rises to the occasion and beats Kishore at Ball Room Dancing.

Yet on another occasion, Vijay saves Geeta and Kishore from being drowned, while enjoying boating. This noble act brings Vijay and Geeta closer and cupid plays the game.

To win over Geeta's heart, Kishore launches a face cream in the market with a bang. But the cream spoils the skin of a billion buyers who storm the office and leave behind few scars on Kishore's skin.

Wily Lalchand implicates Vijay in this fraud and puts the entire blame on him. Vijay, under the circumstances, leaves the job.

Fortunately, he is taken over by a newspaper and Vijay with the help of the Editor Chatterjee tries to expose the sharks of the society with a weapon mightier than the sword - pen.

In this tirade against the tyrants of the metropolis, Vijay tumbles across certain evidences that can expose Lalchand.

Lalchand shoots him but Editor Chatterjee fols his game by taking the rap on him. Kishore who is watching this, jumps on Vijay and while they are scuffling, Lalchand fires a shot once again. But as luck would have it, the shot kills his own son.

On the breathless body of Editor Chatterjee, Vijay and Geeta take a pledge to speak the truth, the whole truth and nothing but the truth. 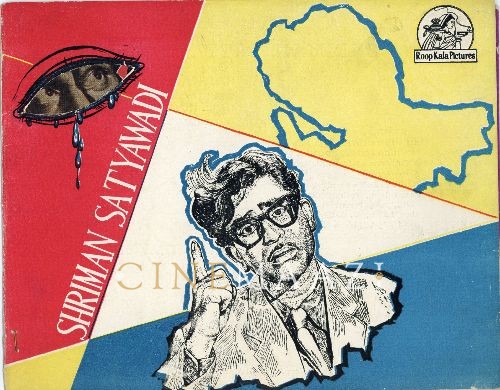