Thakur Bhanu Pratap Singh, a Zamindar of Bharathpur village has a God like image among the villagers. Deshraj Thakur, a village badman goes to jail as a result of the judgement given by the panchayat headed by Bhanu Pratap and ignoring his own misdeeds develops vengeance against Bhanu Pratap.

Heera is the youngest son of Bhanu Pratap and Gouri is brought up by Bhanu Pratap and attends the same school as Heera. Intimate childhood friendship develops between Heera and Gouri. Once, when a teacher iltreats Gouri at the school, Heera is disgusted at education itself and quits the school. This attitude of Heera towards education creates diference between the father and son. Bhanu Pratap starts disliking his son. Inspite of this, Heera tremendously respects his father. Gouri goes to the city for higher studies and returns well qualified whereas Heera remains uneducated. To the proposal of marriage of Heera and Gouri, Bhanu Pratap reluctantly agrees, but Gouri rejects Heera. This rejection strikes Heera like a bombshell.

But, unable to foresee a situation where his father has to face the fact that Gouri has rejected the proposal okayed by him, and also unable to force is decision on Gouri to marry him, Heera saves Gouri from committing suicide and takes the blame on himself for the marriage that doesn't happen.

Radha, a socially aware city girl comes to Heera's village and knowing about Heera's past failure in love, starts loving him. Meanwhile Radha's parents fix her marriage with Deshraj Thakur's son. Radha's mother extracts a promise from Bhanu Pratap that Heera should not marry Radha and Bhanu Pratap in turn takes a promise from his son Heera that he will not marry Radha. Ultimately when the marriage of Heera and Radha takes place by sheer force of circumstances, enraged Bhanu Pratap throws his son out of the house.

Heera and Radha start life from scratch and become successful. The couple are blessed with a boy. Heera becomes a richman of social standing and with his active support Radha pursues the IAS exam and becomes a collector and gets posted to the same district.

In a strange situation, Bhanu Pratap meets his grandson and friendship blossoms between them. Heera constructs a 'Charity Hospital' and names if after his father. This makes Bhanu Pratap feel proud about his son. Gradually, love takes place in mind of Bhanu Pratap substituting hatred for Heera and his family.

Deshraj plans to kill Bhanu Pratap through his innocent grandson by mixing poison in 'kheer' the boy is carrying for his grandfather, and wants to put the blame on Heera. The poisoned Bhanu Pratap is hospitalized. Cunning Desraj succeeds in convincing the people that Heera has planned to kill his father and thereby wants to eliminate Bhanu Pratap and provokes people against Heera. Suddenly Bhanu Pratap enters the scene and unfolds the evil designs of Deshraj Thakur to the villagers. Both the father and the son are united. 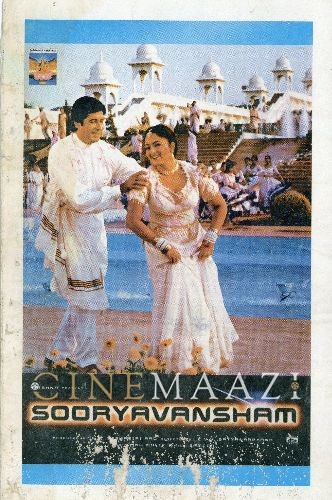