'SOUTEN Kl BETI' is yet another very bold step after his filmi master-pieces lke 'SAAJAN BINA SUHAGAN' and the legendry film 'SOUTEN'. Specially after 'SOUTEN" the natural question that arose in his conscience was to look into another malady of socio- family life and that was the presence of another woman in a man's life, who for reasons of society and law is abandoned and lives a life of a total stranger in society for no fault of hers except that once she loved a man with all her soul and sincerity and has a love-child.

The story portrayed through Shyam (Jeetendra), Rukmini (Jaya Pradha), Radha (Rekha) an Dolly (Dipinti) has been picked up from the reality obtaining in the Indian family life. It's not the story of extra-marital life but about the situation where before the marital life a love is abandoned on the alter of emotional exigency.

Shyam was in love with Radha. an air-hostess, whom he wanted to marry. But as the luck would have it, Shyam's father met with an accident and before dying finds solace in marrying Shyam to Rukmini, the daughter of his dead friend who had helped him in his bad days and had seen that Shyam becomes a doctor .

Shyam and Rukmini found the best balance of life as husband  and wife, after Shyam  had tried to locate Radha to tell her about his marriage.

It so happens that on the advice of Doctors Shyam takes his wife  Rukmini to a hill station where they perchance meet a innocent girl of 5 years who takes a fancy for Shyam and takes him to her home. The forgetten reality now lies exposed  because the little girl Dolly is none else than Shyam's own daughter who was conceived by Radha in pre-marital sex relationship but Radha's pregnancy was not in the knowledge of Shyam.

Rukmini, wife of .Shyam comes to know about this fact. She should have gone wild with Shyam but finding it a fault of. Circumstances, she-Rukmini-rises to the occasion as a great woman. She accepts and adopts Radha as second wife of Shyam and Dolly as their daughter without caring for the society and the law.

They then lived happily under one roof.

The high emotional drama erupts when their daughter Dolly falls in love with a high society advocate's son Amit. The question of marriage between Dolly and Amit comes to a naught when Amit's father Mehra and the society doesn't accept Dolly and charges her of being a illegal child who was not conceived in marriage but in premarital sex . And so 'SOUTEN Kl BETI' is refused her status and love.

Apart from social barriers the legal barriers prove more stringent when Amit marries Dolly without the consent of  his father, after knowing that Dolly was pregnant. A furious Advocate Mehra gets the full family plus his own son Amit arrested on the charge of under-age marriage.

The reality of natural rules and love is put to shame in the legal battle and Rukmini comes to face the hard fact that society and law is not on her side in accepting Radha as a married second wife of Shyam, her own husband and Dolly as their legal child.

High drama in the Court almost goes against the family and the magnanimity of Rukmini, who had tried to give equal status to her Souten Radha and legal status to their daughter Dolly stands punctured.

The crux of the problem emerges that though love and natural instincts of attraction and affection may be very stronger than the norms of society and legal laws but in no case pre-marital sex is desirable. Love should not be treated as sex alone. Sex without responsibility and before marriage doesn't create a balanced society .

An extremely emotional climax builds up when Radha and Dolly leave in the dead and dark of night. Rukmini is there to stop them. An emotionally charged situation and song-the theme song-digs deep into the pathetic plight of Radha, the other woman and Souten. Dolly the Beti of Souten and Rukmini the legal wife.

Finally to grant Radha the status of married wife, which could not be achieved through love and understanding - is achieved through supreme sacrifice Rukmini commits suicide to pave the way for Radha to become legal wife of Shyam and their Beti Dolly ­ Souten Ki Beti achieves the status and love in life which was denied by law and society. 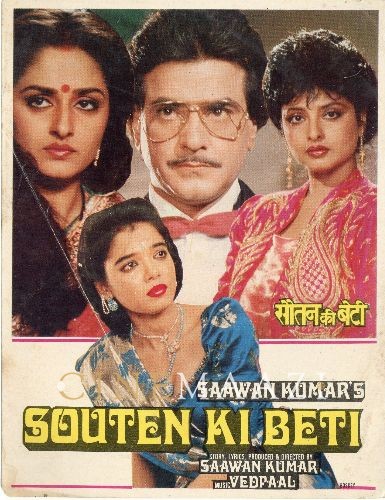