Aditya, the Sovereign King of Alkapuri, paid a visit to the State of Mangalpuri, with the intention of marrying Princess Nandini.

Princess Nandini was in high spirits at the prospect of marriage with the King of Alkapuri. She made her maid Kamuda pose as the Princess-and herself became the maid. The King mistook Kamuda as the Princess-fell in love with her.

Next day when the time for finally sealing the marital alliance arrived, King Aditya garlanded Kamuda, choosing her as his spouse. Persuasion did not deter King Aditya from his choice. Nandini felt insulted.

Years passed-King Aditya and Kamuda lived a happy life-a son was born-and time arrived to declare him as heir-apparent-Invitation to attend the celebrations was issued to Nandini-which she refused.

Exasperated at this behaviour of Nandini, Aditya sent his army to capture her and seize her kingdom.

Nandini was brought as a prisoner-but Kamuda pleaded-and she was released and treated as a guest of honour of the State.

But the sparks of jealousy and anger against King Aditya and Kamuda were smouldering in the heart of Nandini. The good treatment accorded by Kamuda served only to fan these embers. She hatched out a plan of revenge-and one night she managed to take away the sleeping Yuvraj. The child-left in the jungle was brought up by beasts.

King Aditya and Queen Kamuda tried their utmost to trace their child but to no avail.

Nandini was fretting and fuming to take further revenge against King Aditya who had refused to marry her. Help from unexpected quarters arrived Mahendra, the brother of her maid Sundari; had come to town after mastering the art of black magic. She sought his help. He had some pills which when dissolved in water, could transform a human being who drank the water into whatever form the admistrator of the potion wanted him to take.

Nandini told King Aditya and Queen Kamuda that a great yogi from Himalayas had arrived and could tell them about the whereabouts of their lost child Vikram.

Mahendra transformed himself into the form of King Aditva-and with Nandini as his wife, began to rule over Alkapuri. Mahendra has one daughter by his first wife named Amuda. She was declared as Princess.

Vikram grew up into a fine youth-but rustic in appearance.

One day Princess Amuda went on an excursion-on the land where Vikram ruled. She was struck by Vikram,s feats of physical strength and brought him to the palace and began training him to talk and behave as a civilized man-made him forget his jungle friends-and married him. As gradually Vikram began to learn.

Did he succeed in tracing his parents? Did Nandini succeed in her plans? See the thrilling unusual developments on the screen. 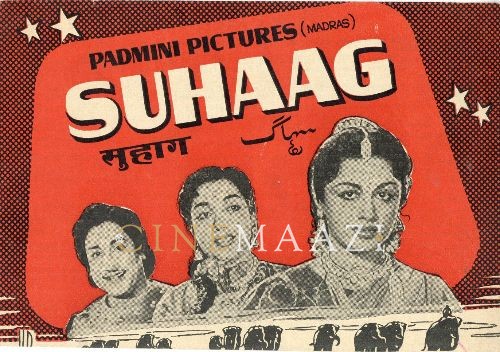