Up in heaven, Bharat Muni promises to stage the drama of LaxmiSwayamvar in which Urvashi, the celestial dancer, plays the role of Laxmi. While the rehearsals are progressing, Urvashi accompanied by Chitralekha and other maids stray downwards on the earth.

Somewhere between the earth and heaven, Urvashi performs a delightful dance but the presence of King Keshi and his retinue causes a flutter among the nymphs and they run helter-skelter in panic. In the confusion, Urvashi is left alone, but King Pururava rescues her and both of them fall deeply in love.

Urvashi returns to heaven but deep down in her heart is enshrined the image of King Pururava while the same is the case with Pururava. He pines for Urvashi.

At the state capital, the Rani and the Minister are glad to have the king back in their midst after an anxious period but Pururava dreams of nothing else but Urvashi. His indifference grows the seeds of suspicion in the heart of the Rani.

At heaven, the show of LaxmiSwayamwar is on. Love-sick Urvashi first refuses to go over the stage but ultimately she does appear and shocks the divine audience by uttering the name of Pururava as her lover. This lapse enrages Bharat Muni and he pronounces a curse on Urvashi depriving her of her heavenly position and ordering her to stay permanently on earth. He also proclaims that she would have to suffer the pangs of separation the moment King Pururava sees their first offspring. Narad intervenes, however, and succeeds in persuading Bharat Muni to curtail the period of her seclusion.

Heartbroken and dejected, Urvashi flits down on the earth with Chitralekha and springs a pleasant surprise on King Pururava. The palace now becomes an emotional battleground where both Urvashi and Rani feverishly endeavour to keep Pururava under their respective spells but the king has definite leanings towards Urvashi. One day he accompanies Urvashi for a ride and enjoys her monsoon-dance in the forest. But Urvashi suddenly vanishes and Pururava tries to chase her in the direction of her fading voice.

Lost in the wilderness, Urvashi has delivered a child and she entrusts the boy to the care of Chavan Rishi until such time as she traces her husband Pururava back. The forsakenPururava searches for Urvashi and Urvashi searches for him. By a queer coincidence, both enter the same forest in hot pursuit of each other. Both hear each others' voices but cannot meet. Both have a fleeting glimpse of each other but within the twinkling of an eye, Urvashi turns into a creeper in this amazing forest which abounds in creepers of human form and shape.

How is the union brought about? What happens to Urvashi's son? How does Bharat Muni's curse affect Urvashi?... What attitude does the Rani adopt?... All these problems form the thrilling climax of the picture and could best be enjoyed on the screen. 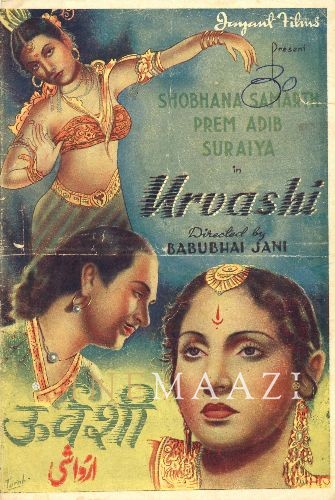 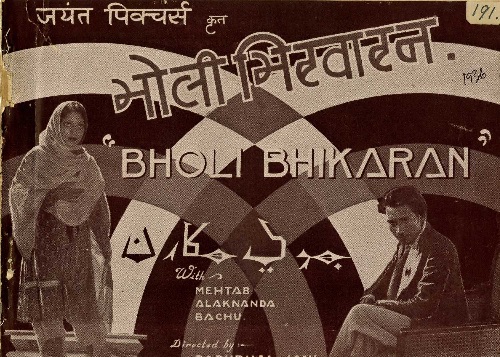