Vishkanya is the poisonous girl. It's the story of how an innocent girl turns into a deadly Vishkanya by the virtue of abnormal circumstances.

It was indeed a traumatic experience for a 7-year-old girl Munni (Nisha). Her father Vikram Singh an honest forest Office, antagonized the four city men, the poachers involved in the smuggling of snake skins, and lost his life in the bargain.

Her helpless mother Sonali was raped and killed before her eyes. The shock & trauma of this horrific incident could never be wiped off from her subconscious mind. It became her nightmare.

Bajrang, a villager, raises this unfortunate orphan child who never had a sound sleep after witnessing the ruthless killings of her parents. So, he takes her to Bhootnath, a local tantric, for treatment. And nobody knew that every single drop of that toxic herbal medicine would poison the innocent child into a ‘Vishkanya’ Years later, two village loafers try to rape a young beautiful girl Nisha and in the struggle that follows, she bites one of the boys in self defense. As a result, his body turns blue & he dies on the spot. The word goes around in the village like a wildfire. And now, everybody is after the life of deadly Nisha the Vishkanya. Her hut is set on fire. But, by the grace of Goddess Kali-Ma, the girl escapes.

Nisha realizes that she is a poisonous girl. She can never live a normal life. She is confused. Distressed, Feels worthless.

On a stormy night, she gets the blessings of Goddess Kali-Ma and realizes that the poison in her body is not a curse for her. It can rather be a blessing in disguise. It can be used as a weapon to take the revenge from her parents' murderers.

Kali-Ma gives her a confidence and she proceeds to the city in search of the four villains. And now she finds them, kills them & baffles the Police department headed by her lover boy Rakesh is what Vishkanya is all about. 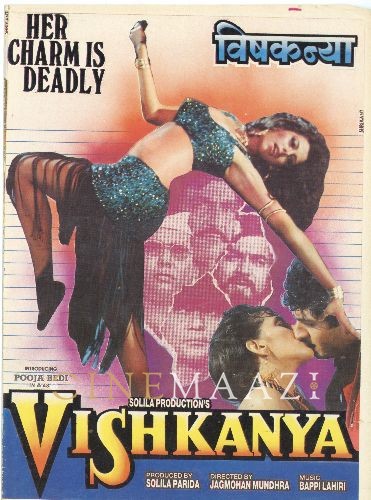