RAMU (ARUN BAKSHI) is a humble farmer in a small village. He leads a very happy life with his wife Laxmi (Aruna Irani) and two sons, VISHNU AND DEVAA.

SHAMSHER (DANNY) the all Powerful Thakur of the area has his eye on Ramu's land, and his wife Laxmi. One day Shamsher tries to molest Laxmi, and there is a dash between Ramu and Shamsher. Shamsher murders Ramu in cold blood before the eyes of Laxmi and her children. In a fit of anger, Vishnu the elder son kills Shamsher's elder brother (KAMALDEEP). Laxmi knows that Shamsher and his men will surely kill her son Vishnu, and in order to protect him, she testifies against her own son in Court so that he is sentenced to a 14 years term in prison and is thus placed out of reach of Shamsher. Soon after, Laxmi dies. The Judge (KULBHUSHAN KHARBANDA) is a kind-hearted man, and knowing the tragic circumstances, adopts the younger son DEVAA.

Meanwhile, VISHNU breaks out of jail and escapes. He returns to the village to find his mother dead, Shamsher gone to the City and no trace of his brother Devaa. He takes refuge in the `Shamshaan' where his mother is being cremated.
The caretaker of the 'Shamshaan' is an old 'Baba' (ALOK NATH). Vishnu narrates his story to the Baba, who in sympathy promises to keep Vishnu like his own son.

VISHNU (SUNNY DEOL) grows up with only one aim in his mind and heart. To avenge the death of his parents he defies the law and the underworld with equal contempt.

DEVAA (ADITYA PANCHOLI) has grown up to be a Police Officer, who is feared and respected by all, as he is a man devoted to his duty and will let nothing come in the way of his discharging it. Devaa is in love with SANGEETA (SANGEETA BIJLANI), who returns his feelings equally. On the other hand, in the basti, PARO (NEELAM) who runs a 'Dhabaa' is head-over-heels in love with Vishnu. Paro is a sharp-tongued, talkative and witty young girl, and her quick temper lands her in a mess, when one day she refuses to pay the 'Hafta', to the Local Goonda BILLA (GURBACHAN). In order to teach Paro a lesson, Billa corners Paro alone and attempts to rape her. Vishnu arrives in the nick of time and gives Billa a sound thrashing. This encounter leads Vishnu to Billa's gang. Vishnu begins to work for the gang, thinking that this may lead him to Shamsher, for whom he has been searching for ages.

Shamsher, who has now changed his name to Sampat, is now the uncrowned king of the city's underworld. He very cleverly robs the gold which he himself imports, by hijacking the containers carrying the gold and claims the losses from the Insurance companies. Inspector Devaa is the only obstacle in Sampat's flourishing business and one day Sampat decides to eliminate Devaa Devaa manages to escape the attempt on his life, but Sampat, while trying to shake off Devaa, who was chasing him enters a fight, where Vishnu, who is competing, spots Sampat, whom he knows as Shamsher. He tries to catch Sampat but is unsuccessful. This incident further fans the fire of revenge in Vishnu's heart he begins to dynamite the godowns of Sampat, and also to hijack his containers of gold. One day in order to put an end to Vishnu's attacks on his property Shamsher conceals an armed gang of his men in a container so they can kill Vishnu. But when Vishnu hijacks the container, Devaa who has been on his track gives chase Vishnu is forced to abandon the maintainer and escapes Devaa, not able to catch Vishnu, opens the container The men with machine guns fire at Devaa Devaa manages to avoid getting hurt and also arrests the gang and men.

Devaa now goes and warns Sampat that very soon he would see him behind bars. Now Sampat has two foes to contend with Vishnu Devaa. To add to his frustration, Sampat discovers that his daughter Sangeeta is in love with the very man who is his arch enemy and the son of his victims Ramu and Laxmi.

Sampat's men, whom Devaa has arrested, breakdowns under interrogation and accuses Vishnu of all Sampat's operations.

Devaa follows Vishnu's trail up to the 'Shamshaan' where he finds Vishnu, a man with only one motive the death and destruction of Sampat!

The incidents that follow this dramatic confrontation, will be best be found out upon seeing, on the Screen "VISHNU DEVAA" 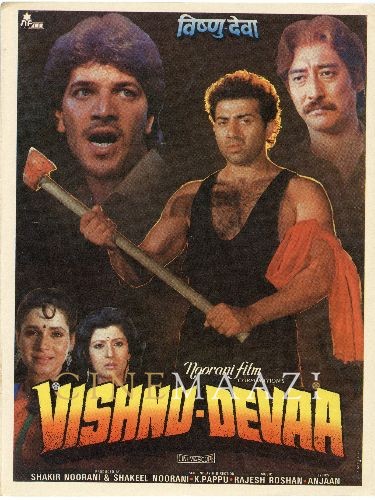 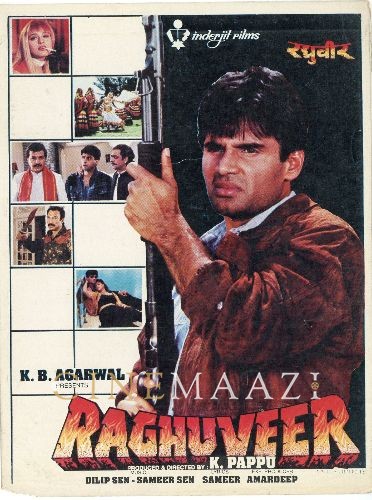