After the marriage of Devki with Vasudeva, Kans drives the Chariot along with them to their Kingdom. The legend changes, when he hears from the space that the Eighth Child born to Devki will meet his death. But Vasudeva assures Kans that that he will deliver him all the children born to Devki.

Narad intervenes and reminds Kans about his death thru the eighth Child. Kans who had been very affectionate with the six children, is enraged and Kills all of them.

This deed moves Vishnu Lok. The horror of Kans is referred to Lord Vishnu and Lakshmi-ji, Lord Vishnu with other Goddesses come to the earth. Krishna is born, but before Kans comes to know the truth, the daughter born to Yashoda is exchanged with Krishna the Eighth child born to Devki.

Kans enters the prison and holds the Girl to Kill, but the Goddess Aadimaya vanishes into space while cursing him.

Krishna kills Pootna and Shaktasura. Yashoda and Nand Gopal are frightened But Krishna gets naughtier day by day. He swallows sand and Yashoda is shocked to see the universe in the mouth of Krishna.

The event of Krishna to kill Kaliya, to vanish the clothes of Gopis the lifting of Goverdhan Giri gnd many more surprise everyone.

Now Kans learns the truth and invites Balram and Krishna to his palace. Yashoda is afraid to apart him further On entering the palace Krishna is entangled to be killed thru the Mad Elephant and wrestlers Chanura and Mastika But all in vain against the supreme power.

The secret is revealed to Yashoda and Nand Gopal that Krishna is not their child Yashoda shocked and decides to wait for Krishna at the door step of her house.

Lord Krishna’s marriage with the eight brides takes place. Time passes and Balram is sent to bring Yashoda to meet Krishna He meets and consoles her.

What happened thereafter? See on the Silver Screen. 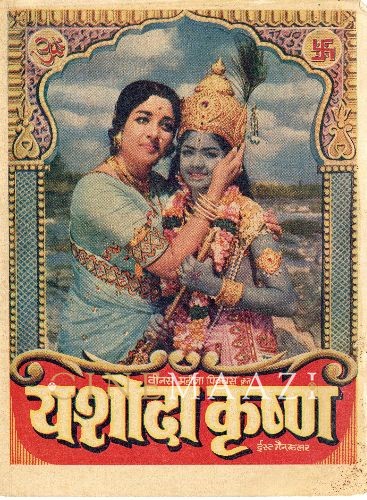