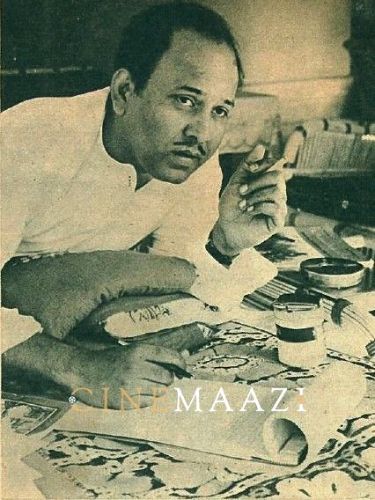 Guru Dutt’s filmography cannot be discussed extensively without acknowledging his creative collaboration with writer-director Abrar Alvi who was not only his good friend but regularly worked on Dutt’s scripts and had also directed Guru Dutt Films’ hit film Sahib Bibi Aur Ghulam(1962). Abrar Alvi was born on 1st July 1927 in Ayodhya. Due to his father’s career, most of his childhood was spent in cities like Akola, Hoshangabad, Jabalpur, Khamgaon and Nagpur. He completed the major part of his education in Nagpur where he worked as an amateur writer and actor in radio. While pursuing his Masters and L.L.B. degree he wrote many plays and with the aspiration of becoming an actor, he decided to go to Mumbai.

Abrar Alvi came to Mumbai in 1951 and joined the Indian People’s Theatre Association (IPTA). He spent almost four months in Mumbai without any fixed place to stay until he met his paternal cousin Irshad Hussain (also known as Jaswant) who was working in Guru Dutt’s upcoming film Baaz(1953). He started driving Irshad Hussain to the set of Baaz where he met the assistant director of the film, Raj Khosla and gradually became good friends with him. Abrar Alvi’s talent was discovered by Guru Dutt accidentally when he heard Abrar giving Raj Khosla some pointers about the dialogues of the film. The exchange piqued Dutt’s curiosity, and he gave Abrar the chance to write dialogues for his next film Aar Paar (1954). The success of the film meant that their collaboration was to continue for some time to come.
While still in college, Abrar Alvi wrote a play titled Modern Marriage. Guru Dutt liked it so much on reading it that he made a film based on it, the acclaimed Mr & Mrs '55 (1955). The film was a hit upon its release and gathered praise for both its writing and direction. However, the film’s credits did not mention the names of the story and screenplay writers.

Abrar Alvi undertook a great deal of research for the script of the iconic Pyaasa (1957). The character played by Waheeda Rehman, Gulabo, was based on the daughter of a Gujarati temple priest who ran away from her family after her lover abandoned her and became a sex worker. Abrar Alvi was fascinated with her modes of expression and adapted them in the script of the film adroitly. Yet again, he was only credited for the dialogues and not his contribution to the story and other aspects of the films. Abrar Alvi was credited as screenplay and dialogue writer for the first time for Guru Dutt’s Kaagaz Ke Phool (1959), but the film flopped at the box office.

Under the same banner, Abrar Alvi also wrote the script and dialogues for Guru Dutt’s film adaptation of Sahib Bibi Aur Ghulam (1962), based on Bimal Mitra’s eponymous novel. While Guru Dutt had planned to direct the film himself, he later passed the responsibility to Abrar Alvi. Abrar Alvi’s efforts paid off, and the film garnered critical acclaim. Sahib Bibi Aur Ghulam also went on to win a number of awards including the President’s Silver Medal and the Filmfare Award for Best Film in 1963. Abrar Alvi was awarded the Filmfare Award for the Best Director in the same year, while Meena Kumari was recognized as the Best Actress.

Guru Dutt passed away when the film Baharen Phir Bhi Aayengi (1966) was still in its early production. Initially, the film was being directed by Shahid Latif before Guru Dutt took over the reins. Only 12-13 reels into the shooting, Guru Dutt suffered an untimely demise. Since Dutt had also been starring in the film, Abrar Alvi took over creative control of the film and completed it with Dharmendra. He had to leave aside his ongoing writing projects at the time, which included the lyricist Shailendra’s production Teesri Kasam (1966) and Lekh Tandon’s Jhuk Gaya Aasman (1968). Ultimately, however, Shahid Latif was credited as the director of Baharen Phir Bhi Aayengi as per his contract.

Sahir Ludhianvi was one of the closest friends of Abrar Alvi in the film industry. Abrar met him in 1951 at Mumbai’s Progressive Writer’s Association Office. Alvi had immense respect for Sahir and his work. While working on the last song of Pyaasa with Sahir, Abrar was hospitalized. He asked Sahir to write the lyrics of the last song while he himself would complete writing the film’s climax once released from the hospital. This agreement gave birth to the famous lyrics Ye takhton, ye taajon, ye mahalon ki duniya. Though the impact of these lyrics posed a challenge to Alvi, he found a way out of the impasse by writing the resounding dialogues spoken by Rehman in the film: “Agar aaj Vijay zinda hote toh hum unhen apne dilon ke takht par bithaate, shohrat ke taaj pehnaate aur gareebi ki galiyon se uthakar mahalon mein raaj karate!”