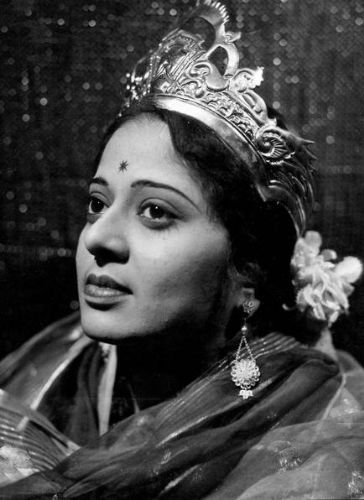 The year 1931. Silent Era. Indian cinema was in the first flush of its romance with the movies. So too Kannada moviedom. The film His Love Affair turned out to be a fortuitous one for a young B Jayamma, who got to romance the producer and father figure of Kannada theatre, Gubbi Veeranna. She also soon became his real-life consort. So much for real-life mimicking reel life, life imitating art.

Jayamma, who was to star in several Kannada and Telugu talkies as the silent era gave way to sound in cinema, was born in 1915 in Chikmagalur district of Karnataka. With theatre laying the foundation for her future movie roles, she started off as an artiste at a very young age in plays produced by Gubbi Veeranna Nataka Company. Due to this association, she also came to be known as Gubbi Jayamma. The young actress soon branched out into silent movies and talkies.

Jayamma was the first daughter of police officer T N Mallappa and B Kamalamma, residents of Balepet in Bangalore. Kamalamma and her sisters Sundaramma, Rudramma and Kittamma were also theatre artists. After the death of her father, 7-year-old Jayamma grew up under the influence of her aunts. A teacher in Balepet School nurtured Jayamma’s talent in acting and singing. Meanwhile, after the death of Mallappa, Kamalamma also joined her sisters, who were part of professional theatre.

Thanks to her teacher Shamanna, who noticed Jayamma’s immense interest in acting and theatre activities that also saw her lose interest in academics, she was introduced to Rasika Janananda Sabha. Jayamma made her debut as an actor in Seetha Kalyana. Jayamma, who was following her aunt Sundaramma, got opportunities to act in plays such as Kabir and Ramayana and went on to become a star through her roles as Chanchalakumari of Sadarame, Chitratare of Gulebakavali and Rati of Manmatha Vijaya.

Jayamma joined the renowned Gubbi Company for a measly salary of Rs 30 a month wherein her artistic talents were further honed to meet the demands of Gubbi Company for nearly three months. Meanwhile, Jayamma, who had discontinued her studies when she was in the third standard, completed her studies until matriculation. Her performance as Rani Mrinalini in Rajabhakti opened the doors of the celluloid world.

A prominent actress of the 1930s and 1940s, starring alongside her husband in plays and movies he produced and directed, Jayamma was also a competent singer crooning many songs of her own films in the era when the actor/ actress themselves had to sing as well.

Brahma Ratham, Thyagayya, Hemareddy Mallamma (1945), Swarga Seema (1946), Jeevana Nataka (1942) and Hari Maya saw Jayamma grow in stature as an actress who delivered well and helped the movie’s fortunes. Incidentally, Jeevana Nataka, the Kannada film wherein Jayamma played the role of an actress in a drama company, was fashioned close to her own life.

In later years in 1981, Jayamma was nominated to serve as a member of Karnataka State Legislative before eventually passing away in 1988, bringing the curtains down on her incredible journey.

Through her lifetime Jayamma not only dominated the professional theatre scene in the 1930s but also went on to become the star attraction of the silent celluloid era, followed by the talkies, going on to act in films till the 70s. She thereby carved a niche for herself in theatre, cinema, and music, besides influencing and emboldening a whole generation of women to take to acting and serving as a model for several actresses.

Jayamma had started her acting career as the ‘Silent’ Seetha in Seetha Kalyana of Rasika Janananda Nataka Sabha in 1924. Though her father T N Mallappa had wanted her to become a doctor, the rousing response to her debut ensured she belonged to acting aided by her proficiency in both Carnatic and Hindustani music that saw her scale great heights in theatre and cinema. Incidentally, she knew Kathak as well.

Her performances as a lead in plays such as Bhakta Prahlada, Devadasi, and Sadarame earned Jayamma much fame. Her role as Draupadi in the company’s ambitious Kurukshetra made her popular outside the Mysore region. Sir Mirza Ismail, the then Diwan of Mysore, who watched the play, praised Jayamma’s performance. Stepping into the silent movie Harimaya (1932) as the second heroine, her role in His Love Affair (1932) as lead actress, saw Jayamma go on to don the greasepaint in more than 30 talkies in Kannada, Telugu, and Tamil.

She served as president of the Kannada Women Writers’ Association and was also nominated to the Karnataka Legislative Council. Her Hemareddy Mallamma (1945) ran for 100 days in theatres. In an event to mark the occasion, the then Chief Minister S Nijalingappa, had presented a West End wristwatch with a gold chain in recognition of her performance.