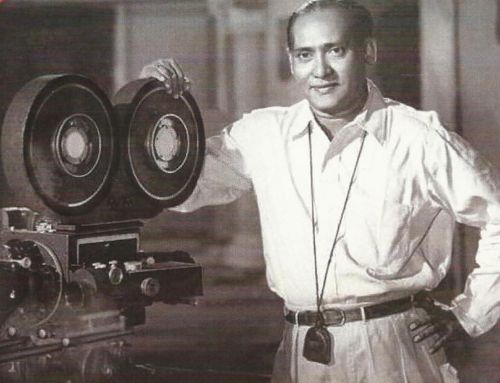 Dilip Gupta was born on 4 September 1911 in Calcutta, West Bengal. Belonging to a family of zamindars, he was brought up in the lap of luxury and comfort. His father, a businessman died when he was only six, and he was brought up by his grandfather. Never very interested in studies, he left school and met B.N. Sircar when he was eighteen years old, and managed to convey his passionate interest in films to him.
Impressed by the enterprising young man, Sircar gave him an important role to play in Chorekanta (1931), a silent Bengali film directed by Charu Roy and photographed by Nitin Bose. Fascinated by Bose’s work, Dilip decided to work behind the camera and assisted Bose in a number of films. After a couple of years of apprenticeship, he persuaded his grandfather to send him to the United States to learn the art of cinematography. He sailed for America in early 1932 and attended the New York Institute of Photography. While in New York, Gupta also worked at Paramount Studios and was trained in animation at Disney’s studio. He returned to India in October, 1934 and joined New Theatres as an operative cameraman.  He assisted Nitin Bose in films like Dhoop Chhaon (1935) and President (1937). He also worked with P. C. Barua in the acclaimed film Devdas (1935) under the supervision of Bimal Roy who was the chief cinematographer of the film.
Street Singer (1938) was Dilip Gupta’s first independent assignment; after that he worked again as a cameraman with director Phani Majumdar on Kapal Kundala (1939). Outside of New Theatres, he also worked on Shapmukti (1940) for P.C. Barua.
In August 1942, he moved to Bombay and worked on his first film in the city with producer Chimanlal Trivedi in the film Inkar (1943). His second film was Sharafat (1943), with which he found a firm foothold in the industry. Among the films he photographed in later years are Dil Ki Baat (1944), Parinde (1945), Pehli Nazar (1945), Parwana (1947), Bimal Roy’s Usne Kaha Tha (1960) and Prem Patra (1962).
Dilip Gupta’s photography grabbed everybody’s attention in Bimal Roy’s Madhumati (1958), which also won him Filmfare’s Best Photographer Award for 1958.  Madhumati is not the only example of his distinguished photography. He continued to stun audiences with his technical prowess in films like Nitin Bose’s Deedar (1951), Bimal Roy’s Biraj Bahu (1954), Filmalaya’s Dil Deke Dekho (1959), Nasir Hussain’s Jab Pyar Kisise Hota Hai (1961). Dilip Gupta also shot an unusual documentary called Gautama, The Buddha (1957) which was produced by Bimal Roy and directed by Rajbans Khanna which also won him the President’s gold medal. Significantly, Dilip Gupta also holds credit for shooting India’s first colour film, Ajit (1948) directed by M. Bhavnani, in Kodachrome 16mm then blowing it up to 35mm.
Leaving behind his invaluable contribution to Indian cinema for decades to come, Dilip Gupta passed away in Chennai in 1999.