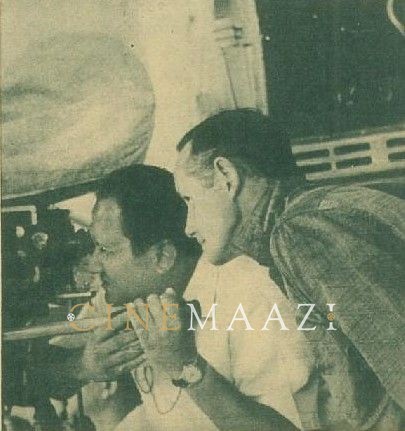 A major factor involved in accentuating the glamour of cinema is the role played by the cinematographer – the focus, lighting and the placement of the camera helps in increasing the mystique of a star.

One of the stalwarts in this field in Hindi cinema was Fali Mistry. Born in a Parsi family in 1917, Fali and his younger brother Jal Mistry contributed immensely to the art of cinematography in Indian cinema. His grandfather owned a theatre and ran a theatrical company in Mumbai. His uncle M L MIstry used to be an importer of DuPont film, and reportedly imported the sound equipment used to make the first talkie of Indian cinema, Alam Ara (1931). He was gifted a Williamson camera when he was a teenager which piqued his interest in cinematography. Deeply interested in learning from whatever source he could find he voraciously read the American Cinematographer and later did a correspondence course from the University of Southern California. He initially joined Wadia Movietone as a camera apprentice and within three months he had become the first assitant to Rustom Master. His first film as an independent cameraman was a stunt film starring Pramila and John Cavas.

The first siginificant venture of his life was the 1942 film, Mata. However, he won acclaim for the 1945 Nandlal Jaswantlal film Amrapali starring Sabita Devi and Prem Adib. Mistry moved into film production and direction in the early 1950s with Jan Pehchan (1950), Sazaa (1951) and Arman (1953). All these films were photographed by his younger brother, Jal.  Fali Mistry got back into cinematography with the Vyjayanthimala- Pradeep Kumar starrer Nagin (1954), considered one of his most technically accomplished works. He outdid himself with Nagin, and shot portions of the movie in Geva colour.

But Fali Mistry’s best was yet to come. He reached the pinnacle of success with Guide (1965), a landmark movie that won him a Filmfare Award. His association with Navketan Films continued in movies such as Prem Pujari (1970), Johny Mera Naam (1970), Hare Rama Hare Krishna (1971), Heera Panna (1973) and Des Pardes (1978). Other noteworthy films Fali Mistry worked on include Ek Musafir Ek Hasina (1962), Neel Kamal (1968), Humsaya (1968), Manchali (1973), Fakira (1976), and Mr. Natwarlal (1979). Both him and his brother were known for adding to the glamour of stars, enhancing the features of heroines with the effective use of diffusers. Influenced heavily by Hollywood and European films of the time, Fali Mistry is known to this day for his creative imagery and interplay of light and darkness.

During the shooting of Sazaa (1951), Fali Mistry fell in love with Shyama and they got married in 1953. They had three children, two sons, Faroukh and Rohinton and a daughter, Shirin.