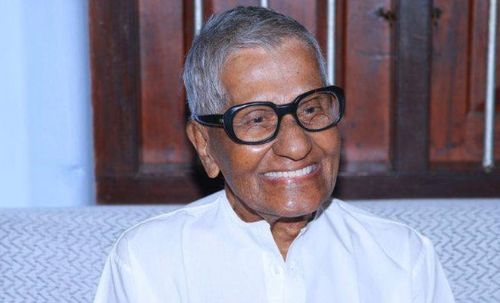 K. Raghavan was born on 2 December 1913 in Tellicherry in the Malabar district, while the country was still under the yoke of the British administration. He took an interest in music as a child, even though he hailed from a family with no musical tradition. He started studying classical music at a young age, and was also a good football player. He studied Carnatic music under the tutelage of P.S. Narayana Iyer. His professional career began as a tanpura player for All India Radio in Madras. Soon, he started working at various All India Radio stations both within and outside the state. In 1950, he was transferred to Kozhikode, and he met P. Bhaskaran, a colleague who nursed an ambition to be associated with the film medium.

This proved to be K. Raghavan’s entry into the world of cinema as well. His acquaintance with P. Bhaskaran meant that he received an opportunity to compose music for the film Kathiru Kanakkili based on a story by the novelist Ponkunnam Varkey. Unfortunately, the film could not be released. The same fate awaited his second venture, Pulliman, based on a story by S.K. Potekkatt. His fortunes changed with his third attempt, Neelakuyil (1954), a film that created history by securing the President’s Silver Medal for the second best feature film of the year. The film’s revolutionary theme and treatment found such resounding success in great part due to K. Raghavan’s music, which included superb songs like Ellarum chollanu, engine nee marakkum, Manennum vilikkilla and Kayalarikathu. Kayalarikathu was rendered in the ‘Mappilappattu’ style. All the seven songs in the film were composed during a camp held at Alwaye. Raghavan used to sing for the producer T.K. Pareekkutty. Though a different singer from Cochin, Abdul Khader, was chosen to sing the song, Pareekutty preferred Raghavan’s own rendition and decided to retain it for the film. The recording was done at the Vahini studio in Madras.

Raghavan is also well-known for his Nataka Ganagal Thalakku Meete Soonyakasam and Pambukalku Malamundu. He composed numerous songs for use in the All India Radio in the light music genre. His background score for the critically acclaimed film Swaham (1994) also received great praise upon its release. He last composed music for the screen with the film Balyakalasakhi in 2014. The film was based on the eponymous novel by Vaikkom Muhammad Basheer.

When Raghavan entered the world of Malayalam film music, the dominant trend depended on borrowing or copying music from popular Tamil or Hindi films. He was the first music director in Malayalam cinema to give film music an indigenous touch and work towards the establishment of a separate identity for Malayalam film music. Though he received extensive training in classical music, most of his songs carried an unmistakable hint of folk and popular forms of music. Over the course of his career, Raghavan composed music for 53 films. He passed away at the age of 99 on 19 October 2013 in Tellicherry, Kerala.