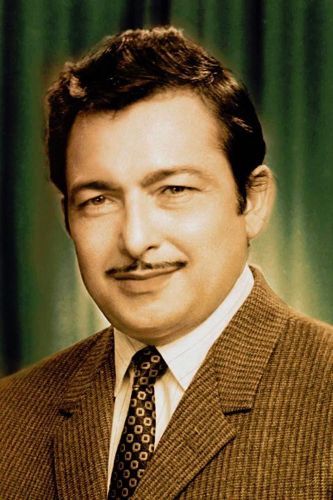 Madan Mohan was born on 25 June 1925 in Baghdad. His father, Rai Bahadur Chuni Lal Kohli was an accountant general with the Iraqi police. Due to his father’s work, Madan spent the first five years of his life in the Middle East. In 1932, with Iraq on the verge of gaining independence, his father was offered a citizenship in the new country, but he decided to resign his job and leave for his homeland instead. He returned to his hometown Chakwal in the Jhelum district (in present-day Pakistan). Soon after, Rai Bahadur started working in Bombay Talkies with Himanshu Rai and moved to Bombay with his family.

While still in school, Madan started actively participating in the children’s program on All India Radio, Bombay. After passing the Senior Cambridge examination from Bombay’s St. Mary’s High School, he joined Colonel Brown’s military school in Dehradun. In 1943 he joined the army, but his dreams tended towards the film industry his father had become a part of. Unfortunately, his father did not encourage him in these efforts. In 1945, Madan resigned from the army and joined AIR Lucknow’s broadcasting station as a program assistant. His new job brought him into close contact with musicians, instrumentalists and well-known singers like Begum Akhtar, Vilayat Khan, Roshanara Begum, Talat Mahmood, Abdul Wahid Khan, Pandit Ramnarain and Fayyaz Khan. Around this time, he also started composing music for and conducting the orchestra at the station.

In 1947, Madan Mohan shifted to Bombay to try his luck as an actor onscreen. He spent the next three years struggling, refusing to use his father’s influence, who was by then a reputed name in the industry. Facing one rejection after another, he was told he could not be an actor. He still nursed an ambition to be a successful singer-actor like the legendary K.L. Saigal. After he lent his voice for some non-film ghazals penned by Behzad Lucknowi and Diwan Sharar, he was enlisted to sing a duet with Lata Mangeshkar for the film Shaheed (1948). The song, titled Pinjre mein bulbul bole, mera chhota sa dil dole, was composed by Ghulam Haider. According to most sources, Rai Bahadur, who was one of the partners at Filmistan Studios, got the song removed from both the film and the records.

Madan Mohan continued to occasionally lend his voice for film songs, but did not gain much recognition as a playback singer. His appearances as an actor were also few and far between—apart from Shaheed, he acted in Parda opposite Neelam, Ansoo (1953) and Munimji (1955).

As a composer for films, Madan’s career took off when he assisted S.D. Burman in the film Do Bhai (1947). He also worked with the music director Shyam Sunder for the films Actress (1948) and Nirdosh (1950). Madan Mohan started his career as an independent composer with the film Ankhen (1950). The first song he recorded for Ankhen was Preet lagaa ke maine ye phal paaya, voiced by Mukesh. The film turned out to be a hit for both the composer as well the debutant director, Devendra Goel. Madan’s relations with his father were resolved after the outstanding success of Ankhen. Unfortunately, Rai Bahadur passed away two months after the release of the film.
In January 1953, Madan Mohan married Sheila Dhingra, the niece of the freedom fighter Madan Lal Dhingra.

In 1957, Madan Mohan was signed on for Dekh Kabira Roya by director Amiya Chakraborty. The film’s music was a massive hit, with numbers like Hamse aaya na gayaa, Kaun aaya mere man ke dwaare and Meri veena tum bin roye becoming chartbusters of the time. The famous ‘Madan Mohan style’ was established firmly with the film Adalat (1958) with songs like Jaana tha humse door, Yoon hasraton ke daag, Unko ye shikayat hai and others. In the late 50s, when O.P. Nayyar and Shankar-Jaikishan stormed the industry, every producer wanted their style adapted into film music. This pressure came to bear on Madan Mohan as well and he had to score music in O.P. Nayyar’s style for films like Night Club (1958), Khazanchi (1958) and Khota Paisa (1958).

Madan Mohan’s landmark work came with the film Haqeeqat (1964), for which he composed the evergreen patriotic classic Ab tumhare hawaale watan saathiyo, written by Kaifi Azmi and sung by Mohammed Rafi. When Chetan Anand offered him a role in the film as well, Madan Mohan’s interest in acting was rekindled. In the same year, he worked in eight more releases including Aap Ki Parchhaiyan (1964), Gazal (1964), Jahan Ara (1964), Pooja Ke Phool (1964), Suhagan (1964) and Woh Kaun Thi? (1964). The last was probably the highest point of Madan’s career, and he wrote haunting melodies for the film like Lata Mangeshkar’s still famous Lag jaa gale filmed on Sadhana and Manoj Kumar.

With his music for the 1970 release Dastak, starring Sanjeev Kumar and Rehana Sultan, Madan Mohan won the National Award for Best Music Direction for songs like Baiyaan naa dharo, Mai ri main kaase kahoon and Hum hain mataay-e-kuchao. Heer Raanjha (1970) closely followed on the heels of Dastak, marking another collaboration between Chetan Anand and Madan Mohan. The song Yeh duniya ye mehfil from Heer Raanjha boasted a unique composition, with four different melodies fused into one unforgettable tune. In Hanste Zakhm (1973), Madan Mohan carried out another successful experiment with the song Tum jo mil gaye ho, where he started the song on a slow tempo and dramatically increased the tempo and rhythm in the successive stanzas as the heroine, Priya Rajvansh, moves from the back seat of the taxi to occupy the front seat next to the hero, Navin Nischol.

Madan Mohan demonstrated his skill once again when he was offered Mausam (1975), starring Sharmila Tagore and Sanjeev Kumar, where he kept with the mood of the film and composed poignant melodies like Dil dhoondta hai and Ruke ruke se qadam. He also composed the famous Haazir hai mohabbat ki sazaa paane ko voice by Lata Mangeshkar for the film Laila Majnu (1976). After the release of Mausam, however, Madan Mohan had passed away. A number of films including Sharafat Chhod Di Main Ne (1976), Sahib Bahadur (1977), Inspector Eagle (1978), Jalan (1978) and Chaalbaaz (1980) continued to carry his music. A number of Madan Mohan’s unused compositions also featured in the 2004 release Veer Zaara directed by Yash Chopra. In a career spanning 25 years, Madan Mohan wrote the music for more than 100 films, amounting to a discography numbering over 600 songs.