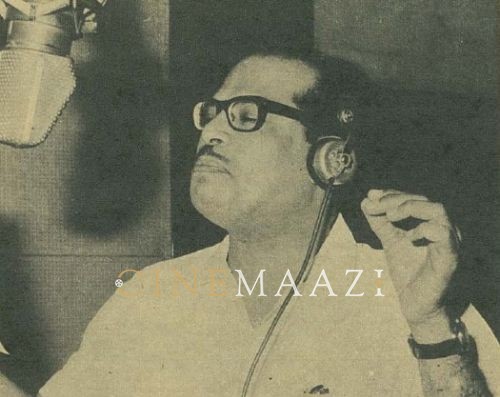 Born on 1 May 1919 in Calcutta, West Bengal to Mahamaya Devi and Poornachand Dey, Manna Dey was named Prabodh Chandra Dey. His uncle KC Dey, the renowned singer-composer, affectionately called him Manna, and this went on to become his stage name in the future. Still remembered for his remarkable voice, Manna Dey sang in Hindi and Bengali, as well as other regional languages across the country.

He held an interest in music even at a young age, often participating in stage shows as a schoolgoing child. He completed his Bachelor’s degree from Vidyasagar College in Calcutta, and was expected to become a lawyer soon.K C Dey had lost his eyesight when he was 13, and needed someone to accompany him wherever he went. This often fell to Dey, and the young man developed a love for music and started learning the intricacies of the art from his uncle.

In 1940, when K C Dey decided to move to Bombay, Manna Dey went with him. Once in Bombay, he had the opportunity to be trained under the tutelage of Pandit Tulsidas Sharma, Ghulam Mustafa Khan, Abdul Rehman Khan and Ustad Amaan Ali Khan. K C Dey was appointed to compose music for the film Tamanna (1942). One of the songs in the film, Jaago aayi usha, was to be filmed on the characters of a beggar and a young girl. Manna Dey lent his voice for the beggar’s part, while Suraiya sang for the young girl.

Impressed by his voice, the filmmaker Vijay Bhatt asked him to voice a few songs for his film Ram Rajya (1943). Under the direction of composer Shankar Rao Vyas, he sang three songs, Chaltu door nagari ya teri, Ajab vidhi ka lekh and Tyag mayi tu gayi teri amar bhavna amar rahi. Due to his success singing for Ram Rajya, he soon started receiving offers to sing mainly for mythological films. From 1943 to 1950, he sang for a number of films in the genre including Prabhu Ka Ghar (1945), Vikramaditya1945), Shravan Kumar (1946), Geet Govind (1947), Jai Hanuman (1948), Ram Baan (1948), Ram Vivah (1949), Sant Janabai (1949), Bhagwan Shrikrishna (1950) and Ram Darshan (1950). Over seven years, he sang 50 songs for 28 films, but he still could not find the place he wanted to carve for himself in the industry. It was known that songs which were rejected by other reputed singers of the time were given to Manna Dey to sing. Leading female singers of the time also often refused to sing a duet with him, fearful that their voices would be drowned next to his.

In the initial years of his career, Manna Dey sang under the name Prabodh Chandra Dey, and there are still 78 rpm records voiced by him credited to this name. Later, his uncle K C Dey pushed him to change his name to Manna. He found some popularity after he sang Upar gagan vishaal, neeche gehra pataal in Mashal (1950). The music for the film was composed by S.D. Burman. Both the film and the song were super-hits. Manna’s career had taken off, and he went on to sing around 2500 songs over the course of the next 40 years.

Manna Dey also sang for V. Shantaram’s Marathi film Amar Bhoopali (1951), establishing him as a reputed singer in languages other than Hindi and Bengali. He later sang in Bhojpuri, Punjabi, Assamese, Kannada and Malayalam, among other languages. Around this time, he also composed music in collaboration with Khemchand Prakash for the film Shri Ganesh Janma (1951).

Perhaps the credit for bringing Manna Dey out of the shadows in which he was languishing was due in part to the composer duo Shankar-Jaikishan. Early in the fifties, when their preferred playback singer Mukesh’s voice was beginning to lose its touch, Shankar-Jaikishan were constrained to employ him as the voice of Raj Kapoor for Shree 420. They had worked with him previously for Boot Polish, for which Manna Dey sang Lapak jhapak, Raat gayi and Thehar zara. In Shree 420, he ghost-sang delights like Dil ka haal sune dil wala, Pyaar hua and Mud mud ke na dekh. However, Mera joota hai japani from the same film, recorded before Mukesh reportedly ‘lost’ his voice, proved to be a runaway hit, and Shankar-Jaikishan began to harbour doubts about Manna Dey.

Fortunately, it was Manna Dey’s voice that helped the duo to their first-ever Filmfare Award for Chori Chori with his superb rendition in Aaja sanam, Jahan main jaati hun and Ye raat bheegi bheegi. His voice enlivened their classical compositions for Basant Bahar (1956) in songs like Sur nasaje, Bhaya bhan jana, Ketaki gulab joohi and Nain mile. Soon, he became their go-to playback singer whenever they wanted to break away from Western melodies, particularly for songs like Jhanak jhanak tori baaje payali ya in Mere Huzoor (1968).

Manna Dey is still remembered as the voice of the sonorous Chanda Mama in Lajwanti (1958). Comparable to Rafi, Manna Dey had his own distinct style of singing bhajans as well, as he demonstrated with Tu pyaar ka sagar hai in Seema (1955). He settled into different styles of singing easily, belting out a qawwali, Na toh karawaan ki in Barsaat Ki Raat (1960), a comic song in Ziddi (1964), a classical one in Parivar, a folksy ditty, Hariyala sawan dhol in Do Bigha Zamin (1953) and the lilting Nazaaron mein ho tum in Begunah (1957). He captivated audiences with his romantic refrain, Kaun aaya in Dekh Kabira Roya (1957), the tipsy Khub piya hai khub piya in Sharada (1957), a children’s song, Chhupa chhupi ye woh chhupi in Savera (1958), the colourful and festive Rang de re in Navrang (1959). He returned to the devotional with Chali radhe rani in Parineeta (1953). In Abhiman (1957), he demonstrated his range again, with songs that would either make the audience’s toes tap, or carry a message to them.

On 18 December 1953, Manna Dey married Sulochana Kumaran from Kerala. Their eldest daughter Suroma was born on 19 October 1956, and on 20 June 1958, Sumita followed. Unfortunately, after a protracted battle with cancer, Sulochana passed away in Bengaluru in January 2012.

Despite his overarching talent, Manna Dey was sadly typecast in the songs he sang for films. His voice was most often used for comic situations, particularly those picturized on Mehmood, a talented street singer, a wedding minstrel, or a song with a message to be played in the background. Over the course of his long career, Manna Dey worked with Naushad as well. He sang only a few songs for him like Bhagat ke bas mein hai bhagwan in Shabab(1954), Jon dariya katti jaaye and Dukh bhare din in Mother India (1957) and Mere ghar se pyaar ki palki in Palki (1967). Both Madan Mohan and Roshan also used Manna’s voice sparingly. Vasant Desai with his classical bias turned Manna’s voice to best advantage in songs like Nirbal se ladai (Toofan Aur Deeya, 1956), Umad ghumad kar (Do Ankhen Barah Haath, 1957) and Jeevan se lambe hain bandhu (Aashirwad, 1968).

Manna Dey won his first Filmfare Award for Best Playback Singer (Male) in 1972 for Mera Naam Joker (1970), in which he sang Eh bhai zara dekhke chalo. He won his second National Award for the same song. He had won his first for his work on the film Mere Huzoor in 1968. He also lent his voice for Harivansh Rai’s Madhushala.

Manna Dey sang for Hindi cinema up until the beginning of the nineties. Later, he continued to sing for regional cinemas. He also appeared in various live performances from 1992 to 2012. Though he had withdrawn from Hindi films largely by then, he sang the song Duniya walo ko nahi kuchh bhi khabar for Umar (2006), along with Kavita Krishnamurthy, Sonu Nigam and Shabab Sabri.

For his outstanding contribution to Indian music, Manna Dey was felicitated with the Padma Shri in 1971 and the Padma Bhushan Award in 2005. For his involvement in film music, he received the Dadasaheb Phalke Award in 2007. Apart from this, he received several awards from other bodies like the Bengal Film Journalists’ Association, as well as various state government awards.

After a long spell of illness, Manna Dey succumbed to a cardiac arrest on October 24, 2013, at the NarayanaHrudayalaya hospital in Bengaluru at the age of 94. 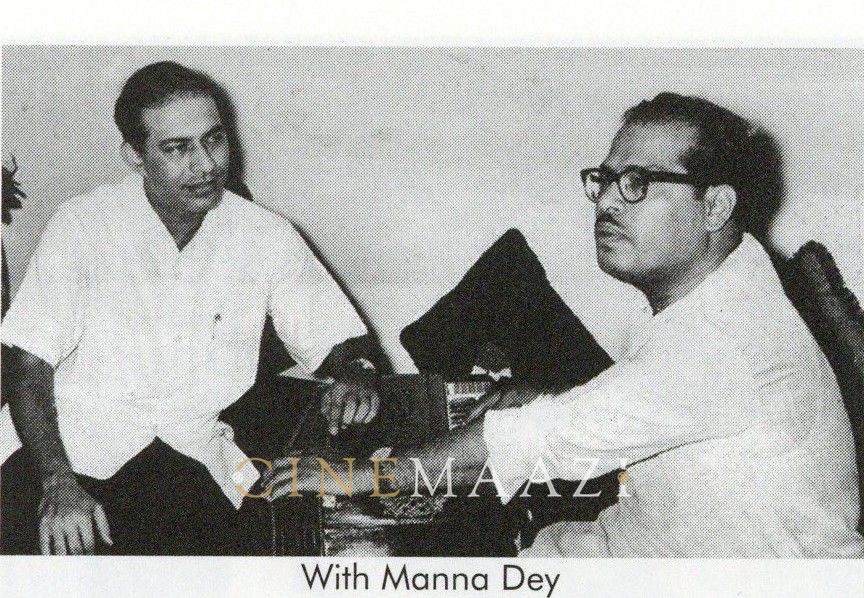 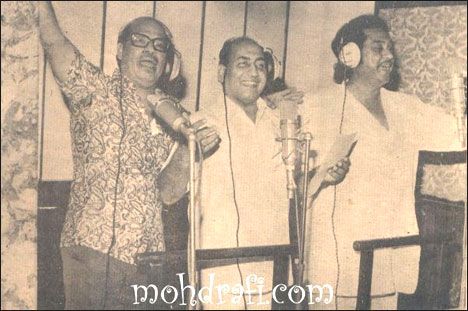 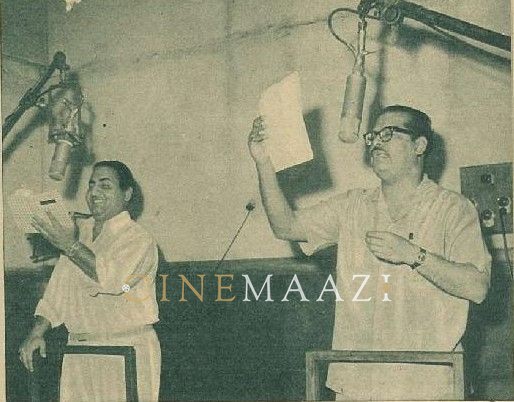