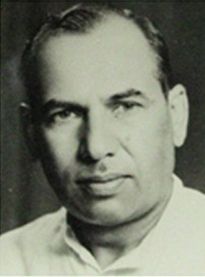 A teacher by profession, Pandit Mukhram Sharma had started writing literature before he ventured into the world of cinema. As a screenwriter and lyricist for films, Mukhram Sharma was a man of integrity who never compromised on his ideals, and always wrote on his own terms. A talented author marked for the nuance of his scripts, Mukhram Sharma laid the foundation for the manner in which Hindi films were written and made for decades to come.
Mukhram Sharma was born on 29 May 1909 in the village of Poothi, in Meerut, Uttar Pradesh. After completing his graduation from Shri Bilweshwar Sanskrit Mahavidyalaya College in Meerut, he started teaching in a school. As a teacher, he continued writing poetry and short fiction pieces, which were published under the pseudonym ‘Ashant’. One of Mukhram’s acquaintances was deeply influenced by his writing, and suggested that he move to Mumbai to look for work. He did not find work in Mumbai, unfortunately. This proved to be a blessing in disguise, however, when he reached Pune in search of employment in films and joined the Prabhat Film Company. Initially, he worked as a speech instructor, correcting the Hindi pronounciation of Marathi actors.
He soon received an opportunity to write for movies, setting the lyrics to Keshav Vaman Bhole’s tunes in Sant Dnyaneshwar (1940). Within the next few years, he wrote dialogues and lyrics for the film Das Baje/ Ten O’Clock (1942) under the same banner, which proved to be a super hit. Riding on this early success, he went on to write the scripts and lyrics for other films like Shri Vishnu Bhagwan (1951), which also achieved some amount of success. Going against the current, Mukhram Sharma preferred to give precedence to social themes rather than the mythologicals and historicals prevalent at the time. His Marathi-language film Stree Janma Hee Tuzi Kahani was also widely acclaimed. This film was later remade in Hindi as Aurat Teri Yehi Kahani (1954), starring Bharat Bhooshan and Sulochana.
Some of Pandit Mukhram Sharma’s best work was with the producer B.R. Chopra. He impressed B.R. Chopra greatly with his script for Yash Chopra’s directorial debut Dhool Ka Phool in 1959, kicking off a long and fruitful collaboration between the two.
Mukhram Sharma also wrote scripts for a number of producers and directors in the south. For L.V. Prasad from Andhra Pradesh, he wrote the scripts of Daadi Maa (1966), Jeene Ki Raah (1969) and Raja Aur Runk (1968). For A.V.M. Productions, he penned the film Do Kaliyan (1968), Gharana (1961) and Grahasti (1963) for Gemini Films, and other hit films like Humjoli (1970) and Pyar Kiya To Darna Kya (1963) for various banners. Even with his busy involvement in films, Mukhram Sharma continued to write and publish novels and literary fiction at this time.
The last few films for which he wrote screenplay and dialogues included the critically acclaimed Nauker (1979), Sau Din Saas Ke (1980) and Sweekar Kiya Maine (1983). On 25 April 2000, Pandit Mukhram Sharma passed away at his residence in Meerut.