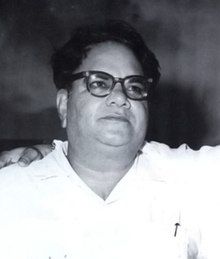 In a short career that only spanned two decades, Raja Mehdi Ali Khan left behind a treasure trove of film songs, poems and Urdu stories.

Raja Mehdi Ali Khan was born on 23 September, 1915 in Karimabad, Jhelum district in present-day Pakistan. His father is said to have passed away when he was only four years old. Raja Mehdi’s early tutoring was handled by his mother Hebay Sahiba, who was the sister of Maulana Zakir Khan, noted as the father of Urdu journalism in Pakistan. Allama Iqbal, known more widely as Sir Mohd Iqbal, was also a family friend. Growing up in an environment suffused with literature and poetry, the young Raja Mehdi gained a cultivated interest in the literary arts.

While he was working in All India Radio in Delhi in the 1940s, Raja Mehdi was invited to join the Hindi film world in Bombay by his friend Sadat Hasan Manto, who already had an active career in the industry at the time. Raja Mehdi started off in the industry as a dialogue writer, and also appeared in a small role in the Ashok Kumar starrer Eight Days/ Aath Din (1946), which happened to be S.D. Burman’s debut as a music director.

Neither dialogue writing nor acting appealed very much to the young Raja Mehdi. Fortunately, in the same year he found his calling as a lyricist when Sasadhar Mukherjee signed him on for the film Do Bhai (1947), the debut film of Geeta Dutt.  Mera Sundar Sapna beet gaya and Yaad karoge ek din yaad karoge  from the film became immensely popular and remain so to this day.

Following Partition in 1947, Raja Mehdi Ali Khan and his wife Tahira decided to stay back in India. If Do Bhai introduced Raja Mehdi as a promising lyricist, his next few movies in 1948 cemented his reputation. He wrote lyrics for many popular movies that year including Ziddi (1948), Shaheed (1948) and Vidya (1948).

In 1950, Raja Mehdi Ali Khan worked with Madan Mohan for the first time in Aankhen (1950). This winning combination followed with films like Ada(1951),

While Raja Mehdi Ali Khan’s association with Madan Mohan produced eternal gems, his association with other music composers was equally fruitful. For instance, who doesn’t remember the immortal melody, Mere piya gaye Rangoon (Patanga, 1949) or for that matter, Main pyaar ka rahi hoon (Ek Musafir Ek Hasina, 1962) or Tum bin jeevan kaise beeta (Anita, 1967)? He worked with other composers such as OP Nayyar, SD Burman, Khemchand Prakash, SN Tripathi and Laxmikant Pyarelal for all of these songs, providing Hindi film history with some of its most remarkable ditties.