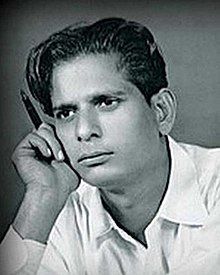 While the songs Deewana hua badal (Kashmir Ki Kali, 1964), Na ye chand hoga na tare rahenge (Shart, 1954) and Kajra mohabbat waala (Kismat, 1968), are still popular, even lovers of Hindi cinema barely remember the man to be credited for all of them: the lyricist Shamsul Huda Bihari, known in the industry as S.H. Bihari. In one of his interviews, Javed Akhtar called S.H. Bihari his role model and lamented how he has completely faded out of public memory despite his immense contribution to Hindi film music.

Shamsul Huda Bihari was born in Arra, Bihar and he completed his college education from Calcutta. Proficient in Hindi, Urdu and Bangla, he got interested in shayari and poetry at a young age, leading to his shifting to Bombay in 1947 to try his luck. While trying to make inroads into the film world, he worked in a rubber factory. When Anil Biswas heard one of Bihari’s ghazals on AIR, he got his first break as a lyricist in Hindi films. He was signed on to write some songs for the film Ladli (1949), and continued his work with movies like Duniya (1949), Badi Bahen (1949), Nirdosh (1950), Bedardi (1951) and Rangeela (1953).

S.H. Bihari also went on to work with other music directors, namely Shankar-Jaikishan (Duniya, 1968, Jhuk Gaya Aasman, 1968), Laxmikant-Pyarelal, Madan Mohan and Bappi Lahiri. The simplicity and beauty of his lyrics meant that they were easily memorised and lapped up by the masses. It is highly reflective of the superlative quality of his work that while the poet himself may not be known or recognized, his songs remain known and recognized.