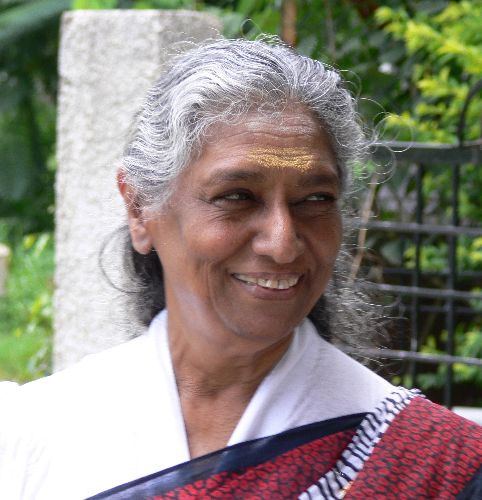 Born in a small village in Guntur district in Andhra Pradesh, S. Janaki was never trained in formal music. The daughter of an Ayurvedic doctor, she was a naturally gifted singer who started performing on stage when she was only ten years old. Though she was married at the age of 18 in 1956, her husband was supportive of her career as a singer, helping her to eventually become the Nightingale of South India.

Her husband Ramprasad, who is said to have heard her sing on stage before marriage, fell in love with her music and made her singing career the prime focus. It is said that he got his father to write to AVM banner about Janaki and her talent. Her first song was for the Tamil film Vidhiyin Vilayattu in 1957. Within her very first year, she is said to have sung songs in all the South Indian languages.

In an accomplished career spanning nearly five decades, the prolific singer has sung over 48000 songs in at least 17 languages such as Kannada, Telugu, Tamil, Malayalam, Hindi, Odiya, Konkani, Tulu, Bengali, Urdu and Punjabi as well as English, French and Arabic.

Known particularly for her voice modulation and versatility, S. Janaki is considered a legend in South Indian cinema and her collaborations with music stalwarts such as Ilaiyaraaja, P.B. Sreenivas, S.P. Balasubrahmanyam, Rajkumar and M.S Viswanathan are memorable.

A winner of 4 National Awards, and more than 30 Regional Filmfare awards, it is impossible to compile an exhaustive list of S. Janaki’s era-defining numbers in Kannada, Tamil, Telugu and Malayalam. Among all the songs she sang the most number of songs in Kannada. Some numbers that are remembered even today are: Gaganuvu Ello (Gejje Pooje, 1970), Barede neenu nanna hesaru (Seetha, 1970), Nagu Endhidhe (Pallavi Anu Pallavi, 1983).

In Tamil her songs with S.P. Balasubrahmanyam and Ilaiyaraaja are still remembered. S. Janaki is the only singer to have won state recognition for her songs sung by the three legends of Tamil music, M.S. Viswanathan, Ilaiyaraaja and A.R. Rahman. Her famous numbers include Sendhoora poove ( 16 Vayathinile, 1976), Kaatril Endhan (Johnny, 1980) and Chinna Thayaval (Thalapathi, 1991) to name only a few.

The reigning queen of South Indian music was introduced to the Hindi film industry by Bappi Lahiri. In the 1980s she sang many hit numbers for acclaimed music directors like Bappi Lahiri and Laxmikant Pyarelal. She retired in 2016, only returning to sing a song in the Tamil-language film Pannadi (2018), at the age of eighty.