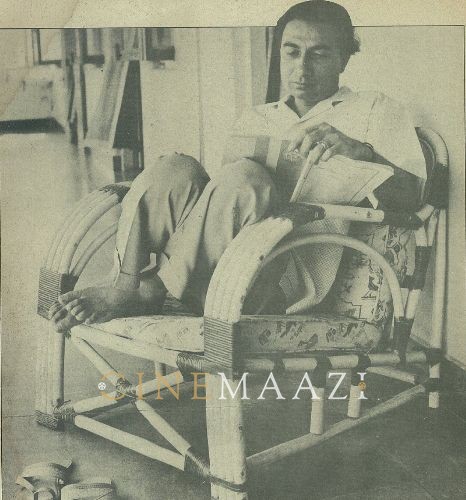 Much has been written about the overlooked contribution of lyricists to that most important element of Hindi cinema, the songs. Perhaps the only exception to this rule in his times, and to this day, remains Sahir Ludhianvi. With his immense and varied output of popular songs that people remember even today, Sahir Ludhianvi revolutionised writing styles in the Urdu and Hindi languages.

Sahir Ludhianvi’s grandfather Fateh Mohammed was a wealthy landlord of the Gujjar community. His father, Chaudhri Fazal Mohammed, was born into a great deal of wealth, and spent most of his fortune on his decadent lifestyle. Sahir was born Abdul Hayee to Fazal Mohammed and his eleventh wife, Sardar Begum on 8 March 1921 in Ludhiana. Unable to bear the toll her husband’s excesses were taking on her, Sardar Begum left for her brother’s house with her six-month old infant. Other sources claim that she separated from her husband when Abdul was three or four years old. An enraged Fazal lodged a case in court for the custody of Abdul, his only heir. The court eventually ruled in favour of Abdul being raised by his mother when the young boy was told to choose between his parents. Subsequently, his father threatened to have him kidnapped or even killed, leading his mother to employ security guards to protect her son. The strife between his parents so early in his life imbued the young Abdul with a deep sense of insecurity that accompanied him well into his adulthood, and he would never step out of the house without company.

Sardar Begum enrolled Abdul in the Malwa Khalsa High School in Ludhiana. While still in school, he often watched plays written by Agha Hashr Kashmiri, and read Master Rehmat’s collection of Urdu poems. His teacher in school, Faiyaaz Haryanvi, taught him Urdu and Persian as well, and fostered in him an enduring love for poetry and literature. Growing up surrounded by the poetry of greats like Muhammad Iqbal, Faiz Ahmed Faiz and Josh Malihabadi, by the tenth grade, Abdul had started reciting poetry himself. Blessed with an elephantine memory, he could quote long couplets and entire film dialogues at the drop of a hat.

While at the Government College of Ludhiana, he came into contact with student politics, leading to a lifelong proclivity for progressive, left-leaning ideas. He also fell in love with Mohinder Chowdhury, but their affair was cut short when Mohinder passed away unexpectedly from tuberculosis. He later grew close to a certain Birender Kaur, but this affair did not reach fruition as well. Within months, Abdul’s own participation in political activity led to his expulsion from the college. He completed his graduation at the Dayalsingh College in Lucknow.

While still in college, Abdul had already started writing poetry in Urdu, and he composed his poem Kasam un tang galiyon ka jahaan mazdoor rehte hain. He adopted the pen name Sahir, meaning magician. Soon, he was editing prestigious Urdu dailies like Adab-e-Latif and Shahrar. In 1943, he settled in Lahore, where he completed his first published work in Urdu, Talkhiyan (Bitternesses). Following Partition, while he was working as the editor of the Urdu newsletter Savera in Lahore, the zeal for reformation in his writings drew the ire of the newly formed Pakistan government, which issued a warrant for his arrest.

Sahir fled to Delhi, where he edited a few more magazines for eight weeks. Later, he moved to Bombay with his friend, the poet Majaz. Already a well-known poet by this time and passionate about cinema, Sahir was unprepared for the struggle that awaited him. Though he was part of the Progressive Writers Association and in contact with established writers like Krishan Chander, Saaghar Nizami, Kaifi Azmi and Jan Nisar Akhtar, it was some time before he was accepted as a lyricist. Sahir started his career in films by fair-writing the drafts of Krishan Chander’s stories at a monthly salary of Rs. 150. He also ghost-wrote a few songs for the lyricist Prem Dhawan. His first break came when S.D. Burman asked him to write lyrics for one of his tunes, and was so impressed that he included the nazm, Thandi hawayein, lehrake aayein in the film Naujawan (1951). Two songs from the film written by Sahir proved to be very popular, and he continued his collaboration with S.D. Burman with the Dev Anand starrer Baazi (1951), one song in Sazaa (1951), which established him as a leading lyricist with ease, and Jaal (1952), for which he wrote the lilting Ye raat ye chandni phir kahaan. His ability to write grounded yet poetic lyrics, evocative yet simple sentences, and the inclusion of prose in his poetry shone through spectacularly for the film he is still remembered for, Guru Dutt’s critically acclaimed Pyaasa (1957). Much of the story was also rumoured to be based on Sahir’s life and his struggles as a poet.

Soon, Sahir had reached such heights of fame that he could choose music directors to work with. When he parted ways with both S.D. Burman and O.P. Nayyar due to artistic differences, lesser-known composers like Ravi (Gumrah, 1963, Hamraaz, 1967 and Waqt, 1965) and N. Dutta (Dhool Ka Phool, 1959, Sadhna, 1958) came into their own aided by his encouragement. While he wrote immortal songs like Aye meri zohra jabeen for Waqt, he did not hesitate to compose the openly critical and feminist Aurat ne janam diya mardon ko for Sadhna. Often upholding the ethos of communal harmony, Sahir included Hindu mythology in a qawwali in Barsaat Ki Raat (1960). He continued his work over the next decade with the stellar Kabhie Kabhie (1976), for which he won the Filmfare Award for Best Lyricist.

Deeply affected by his mother’s death in 1976, Sahir withdrew from social and literary life and passed away a few years later on 25 October 1980. Despite being rumoured to have intense love affairs with the poet Amrita Pritam, who wrote to and about him frequently, and the singer Sudha Malhotra, Sahir remained a confirmed bachelor to the end of his life. He was perhaps one of the very few lyricists in the industry who remained at the very peak till his demise, with a career spanning three decades. At the time of his death, Sahir had already completed work on Insaf Ka Tarazu (1980), Chehre Peh Chehra (1981) and Dhanwan (1981). His last three films, Lakshmi (1982), Deedar-E-Yaar (1982) and Jeeo Aur Jeene Do (1982) were completed by his admirers and fledgling lyricists Kaifi Azmi and Indeevar. For his immense contribution to film music and the literary arts, Sahir Ludhianvi was awarded the Padma Shri in 1971. He won several other awards over his lifetime, including the Maharashtra Urdu Academy Awards, Maharashtra State Literary Award and the Soviet Land Nehru Award. In Ludhiana, his college auditorium was named for him, as was a road. Even after his passing, Sahir continued to inspire generations of lyricists with his mix of incisive political insight and high-flown romanticism.