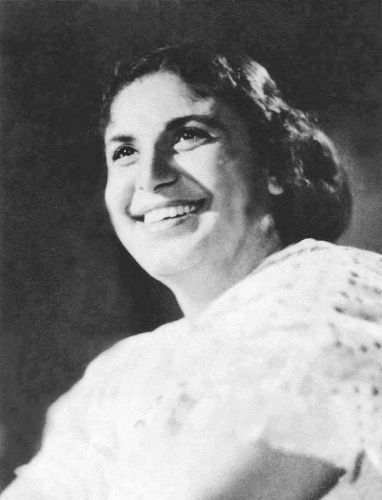 The second well-known female composer in the history of Hindi cinema, following Jaddanbai, Saraswati Devi paved the way for others after her like Usha Khanna, who went on to enjoy success in a largely male-dominated industry. While most of Jaddanbai’s music is no longer available on records, and she is known to have composed music for only a few films, Saraswati Devi remained active as a composer for over a decade, associated with reputed production houses like Bombay Talkies and later Minerva Movietone.

Saraswati Devi was born Khurshid Minocher-Homji in a wealthy Parsi family in Bombay in 1912. Interested in music at a very young age, she received training under the tutelage of the famous Vishnu Narayan Bhatkhande at the Sharda Sangeet Vidyalaya. Following her matriculation, she enrolled in the Marris College of Music (now the Bhatkande Music Institute Deemed University) in Lucknow, where she also taught for some time. While still in college, Khurshid started performing at jalsas. Her talent did not go unnoticed, and in 1927, she started singing professionally when the Indian Broadcasting Company was instituted in Bombay. Along with her sisters, who played various instruments like the sitar and dilruba, Khurshid sang and played the organ. Soon, they earned a name for themselves as the ‘Homji Sisters’.

Around 1933-1934, Khurshid came to perform at a jalsa in Bombay organised by the Theosophical Society. While there, Harindranath Chattopadhyay introduced her to Himanshu Rai, who went on to become one of the founding members of Bombay Talkies. Impressed by Khurshid’s extensive musical knowledge, Himanshu Rai asked her to join Bombay Talkies along with her sister Manik. Despite her protestations that she was trained in classical music and had no knowledge of film music, Khurshid eventually capitulated and decided to become one of the core members of Bombay Talkies when it was started.

Due to Khurshid and Manik belonging to a conservative Parsi family, they faced a great deal of censure when they joined the much-maligned world of cinema. Khurshid herself was once caught in a car with Himanshu Rai by an angry mob comprising of irate members of the Parsi community. They made a narrow escape when Rai convinced the crowd that she was Devika Rani, not Khurshid. Following this incident, he advised the two sisters to adopt screen names if they wished to continue in the industry. Subsequently, Khurshid became Saraswati Devi and her sister Manik came to be known as the actress Chandraprabha. Despite their decision to change their names, their participation in Bombay Talkies’ first film, Jawani Ki Hawa (1935) was condemned by the Parsi Federal Council, and matters had to be brought under control by the appeals of Parsi members from Bombay Talkies’ trustee board.

Notwithstanding these obstacles, Saraswati Devi managed to find a firm footing in the film world. Himanshu Rai allowed her full creative freedom with her music. Soon after the release of Jawani Ki Hawa, she was responsible for setting up a separate music department in Bombay Talkies, where she painstakingly assembled an extremely skilled group of musicians—this included S.N. Tripathi, who later also worked with her as both assistant and independent music director. Faced with competition from New Theatres’ seasoned actor-singers, Saraswati Devi was also confronted with the tough task of training actors like Devika Rani to sing for the screen. Keeping in mind the limits of actors like her and Ashok Kumar, Saraswati Devi took care to compose songs they could sing with ease. This lead to her creating simple, effective melodies. Her in-depth knowledge of classical music meant that her tunes did not seem overly complicated even when they were based on ragas.

Saraswati Devi’s composition Sakhi ri mohe prem ka saar bata de in Jawani Ki Hawa, voiced by Devika Rani and Manik Singh, proved to be incredibly popular. She also included a garba song in the film, Udhariya udh dwaar aaj. Saraswati Devi incidentally became one of the first music directors to use the still developing technology of playback singing. When her sister Chandraprabha was to sing for a scene in Jawani Ki Hawa, she developed a sore throat, and Himanshu Rai suggested that Saraswati Devi sing the song while her sister lip-synched on camera. The song itself was only released as a record—due to its popularity—even though it was not included in the final cut of the film.

For Jeevan Naiya (1936), which also starred S.N. Tripathi as a villain, the songs Main tum mein hun tum mujh mein ho and Koi humdum na raha voiced by Ashok Kumar were also received well by the audience. Years later, Kishore Kumar sang Koi humdum na raha again for Jhumroo (1961). It was with Achhut Kanya (1936) that Saraswati Devi reached the heights of celebrity. The Ashok Kumar- Devika Rani starrer included her still famous composition Main ban ki chidiya, a song that was on everyone’s lips at the time. S.N. Tripathi, her assistant at the time, rehearsed with the two actors for a month before the song was recorded. On its release, the song carried the influence of her classical training along with her trademark light touch, making it an instant hit. She straddled genres with ease, composing patriotic songs like Jay jay janani janmabhoomi for the 1936 release Janma Bhoomi. Saraswati Devi often resorted to her roots for her compositions, using Raag Mand for songs in Izzat (1937) and Jeevan Prabhat (1937). She used other raags for her work in Prem Kahani(1937), Savitri (1937), Bhabi (1938) and Nirmala (1938). In Durga (1938), she used Raag Bhairavi to great effect.

Saraswati Devi gave the acclaimed lyricist Kavi Pradeep his first break with the song Hawa tum dheere baho, composed by her and sung by Leela Chitnis, Bombay Talkies’ upcoming star. The famous singer-actor Hansa Wadkar also sang songs set to tune by Saraswati Devi in Azad (1940) and Navjeevan (1939). Perhaps one of the reasons for Saraswati Devi’s continuing success and prolific output over this period was her attention to maintaining clarity in her music, which made her tunes easy to remember and repeat. She often used a chorus to amplify the voice of the songs, and the young Kishore Kumar as well as Raibahadur Chunnilal’s son Madan Mohan had the privilege of singing in these as well. Using instruments like the jaltarang, Saraswati Devi could lend an ethereal quality to her pleasant melodies. In fact, the success of the film Jhoola (1941) was largely based on how well her compositions for it were received.

After Himanshu Rai passed away in 1940, Bombay Talkies split over some differences between the remaining members. Saraswati Devi started working for films produced by Sashadhar Mukherjee like Naya Sansar (1941). Written by K.A. Abbas, this film would prove to be her last under the Bombay Talkies banner. By this time, Saraswati Devi was so well-reputed that Sohrab Modi himself invited her to work at Minerva Movietone. Unfortunately, her understated style of composition did not suit his grand, ponderous scale of filmmaking very well. She still composed the music for some films under this banner including Bhakta Raidas (1943) and Prithvi Vallabh (1943). Her music had started to deteriorate, however, and her style was cramped by the lack of freedom in working conditions. In the 1945 release Amrapali, filmgoers had another rare glimpse of her former glory in songs voiced by Amirbai Karnataki. She continued to compose for a few other films like Khandani (1947) and Usha Haran (1949), for which she worked with Lata Mangeshkar. As time passed, she started receiving fewer offers. She last composed music for S.N. Tripathi’s Enam (1955) and the Rajasthani children’s film Babasa Ri Ladli (1961).

Saraswati Devi suffered an unfortunate fall in a bus accident in 1969. Though sources are conflicted on the exact year of her passing, she did not live long after, and passed away on 10 August 1978. 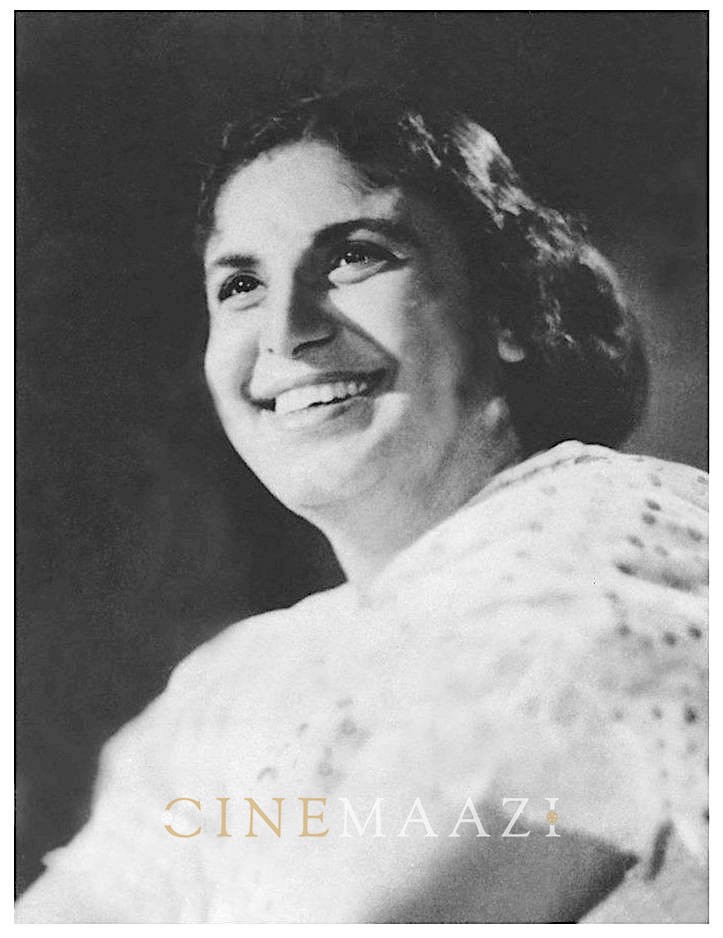