With Indian cinema’s emphasis on spectacle, setting plays a crucial role in every film. Film sets add depth to the story and characters, enriching the film with details that bring a world to life on the screen. Sudhendu Roy is one of the many art directors who have been significant in shaping the history of Indian cinema and creating its idioms for decades to come.

Sudhendu Roy was born in 1921 in Pabna in present-day Bangladesh according to most sources. His father, himself a doctor, wanted him to pursue law, but Roy had other plans. Under the pretense of studying law, he moved to Calcutta, intending to pursue art. While in Calcutta, he developed a close friendship with Parimal Roy, Bimal Roy’s brother. Through this association, Sudhendu Roy came to work with Bimal Roy in films like the Bengali-language Anjangarh (1948) and Madhumati (1958) and Sujata (1959) in Hindi. Roy also worked with other leading Bengali filmmakers like Tapan Sinha and Hiten Chaudhury.

As part of Bimal Roy’s team, Sudhendu Roy moved to Bombay in the 1950s with Asit Sen and Dilip Bose. In Bombay, he soon established himself as an art director. Without the assistance of modern technology, Sudhendu Roy excelled at his work, relying on extensive sketches, his imagination and his dedication to work with whatever materials were available. Learning from books, he moved from strength to strength, finding a footing with colour cinema just as he had with black and white films. Whatever the budget of the film, Roy never compromised on the quality of his work.

His daughter Sharmistha Roy, herself an art director trained under her father, recalls that Sudhendu Roy preferred beige and grey scales to exuberant colourful schemes, even when cinema transitioned into colour. He stuck to his understanding that sets were to provide support to the film, bringing out the nuances of the narrative and performances. Despite his restrained and budgeted production designs, he paid attention to minute details. He kept his sets realistic, often making walls of the sets from jute and mixed material with maanjarpaat, a grey cloth. As a still photographer and skilled sketch artist, Sudhendu Roy also often suggested camera angles and placements to directors keeping in mind the lighting of the sets.

Sudhendu Roy received his first opportunity to independently direct a film when Rajshri Production’s Tarachand Barjatya asked him to direct for them. Roy thus made his directorial debut with Uphaar (1971), inspired by Rabindranath Tagore’s short story titled Sampati, a choice influenced by his love for Tagore’s stories. He went on to direct four other films following this, namely Saudagar (1973), Sweekar(1973), Jeevan Mukt (1977) and Aap Ki Khatir (1977). With Jeevan Mukt, he also tried his hand at production.

A reclusive man, Roy kept to himself and his close friends, one of whom was the actor Abhi Bhattacharya. Ganesh Basak, a fellow art director and a friend, introduced him to his sister Krishna, whom Sudhendu Roy later married. Both from an art background, they would often discuss his work together. They had three children, Krishnendu, Sharmistha and Sumona.

Sudhendu Roy was recognized for his phenomenal work as an art director thrice by Filmfare for Madhumati, Mere Mehboob (1963) and Sagina (1974). Roy was known to listen closely to the director’s descriptions and come up with innovative sets like the turntable set for the song Om Shanti Om in Karz(1980). Roy has also trained other art directors like Desh Mukherjee, R. Verman as well as his daughter Sharmistha Roy. Sudhendu Roy passed away in 1999, leaving behind a rich legacy in the world of Indian cinema. 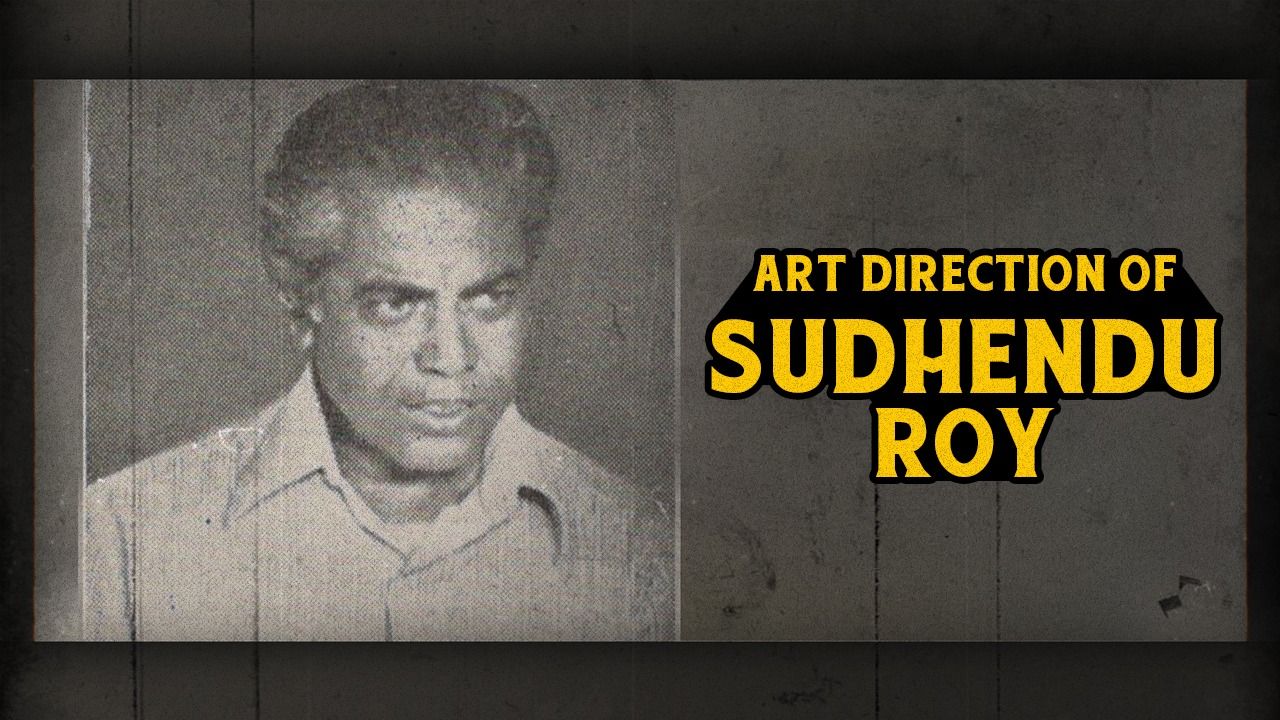 Not To Be Forgotten - Art Direction of Sudhendu Roy