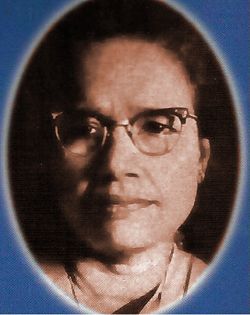 One of the most sought after and celebrated playback singers of her time, Suprava or Suprabha Ghosh was one of the many artists of the early cinema era whose legacy is lost or forgotten by the admirers of Indian cinema and their following generations. Starting her career at the early age of thirteen, she is said to have actively contributed her voice to numerous Bengali film soundtracks throughout the 1940s and 50s, and even later. The later part of her life was marked by teaching Nazrul Geeti to several artists.

Suprabha was born on 25th September in 1919, to Upendranath Ghosh and Champaknalini, who were both ardent music lovers and through them, she was instilled with an appreciation and talent for singing. She received her first phase of training in the field from her parents, who provided lessons to her in the art of singing devotional songs. Thereafter, she received formal training in singing from Dhrupadia Shishir Guha and then from Tarapada Chakraborty. Soon after, she entered the professional world of playback singing through her participation in ‘Galpadadur Asar’ in All India Radio, Calcutta. Her voice gained such popularity and liking that during the 1940s, she was a regular at the live early morning programme – Mahishashurmardini. Her contributions and association with the radio continued all her life.

Suprabha Ghosh married Advocate Sudhir Chandra Sarkar in 1942. However, unlike the majority of female artists of that time, she did not stop singing for films and continued to work as a playback singer even after the birth of her two sons. She simply incorporated her husband’s last name to her own and since then, all of her work was credited to the name of Suprabha Sarkar. Her passion for the field was thus inspiring at a time when women were merely beginning to enter any professional industry.

The first ever gramophone record published in her name was in 1936, by Senola Musical Products Company with the songs Jadi Swapan Bhange Aji Nayan Jale, written by Hashirashi Devi and Alor Desher Bandhu He Mor, written by Batakrishna Dey. Nitai Ghatak composed the music for both songs. In 1938, she joined the Hindusthan Musical Products as a regular artist and contributor after publishing several basic discs with Senola. She also recorded some songs for Bharatbani Records from 1937 to April 1938, which was a sister company of Hindusthan Musical Products. These songs were credited to the names of Anjana Sarkar and Anuradha Ghosh, which was perhaps necessary due to Suprabha’s existing contract terms with Senola. This included one disc record play ‘Bhorer Ashru’ that she sang and acted in, under the name of Anuradha Ghosh. She worked primarily with HMV for a long time after that and was also invited by the company to record two songs with Hemanta Mukherjee as her trainer in 1953, and then again in 1955 under Shyamal Mitra’s guidance. She further sang for the Megaphone Company in 1959 and the following year.

Perchance it so happened that prominent Bengali poet Kazi Nazrul Islam gained an interest in Subprabha Sarkar’s work and recognised her talents for the devotional realm of music, around the time of the film Sapurey(1939). Consequently, their interaction led to the creation of the evergreen songs Kaberi nadijale ke go alika in 1941 and Mor pratham moner mukul as well. In the coming times and mainly during the latter part of her life, she was a prominent contributor to and teacher of Nazrul sangeet, and even recorded Tagore songs on several occasions.

As the film industry and business began to pick up in the 1950s, several new talented artists entered the world of playback singing and slowly, Suprabha began to get sidelined. After a while, she willingly detached herself from the show business and began to keep herself involved with only the teaching of music in several prestigious institutions like Rabindra Bharati University, Surtirtha Sangeet Bidyalay. Her association with All India Radio stayed intact till the end, where she was appointed as a trainer of Nazrul songs.