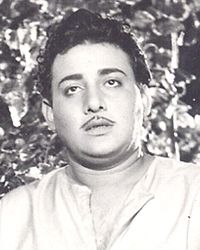 One of the Kumara Thrayaru or Kumar Triumvirate of Kannada cinema, Udayakumar was also a prolific writer besides being an actor of repute. A multifaceted man, he authored several plays and books and was admired by his fans in the various roles of playwright, lyricist, novelist, music composer, producer and director.

Born in Salem on 5 March 1933, Udayakumar made his debut as an actor in the 1956 release Bhagyodaya and went on to act in numerous films over the 1960s. He was spotted by lyricist Kanagal Prabhakara Shastry. He attained popularity through his roles in Panchrathna (1956) and Varadakshine (1957). He formed a popular pairing with another superstar Rajkumar, with whom he starred in as many as 36 films post Mahishasura Mardini (1959). Known to his fans as Kalakesari, Natasamrat, Pavanasutha and Gandugali, Udayakumar has appeared in 193 feature films, including 171 in Kannada, 15 in Telugu, 6 in Tamil and one on Hindi. He has also received several regional and national awards for his performance, particularly in Kannada films. Some of his notable performances are Veera Kesari (1963), Sri Ramanjaneya Yuddha (1963), Chandavalliya Thota (1964), Kathari Veera (1966), Bhale Basava (1969) and Hemavathi (1977).

Udayakumar was also an active member of the national movement for freedom. He led a team of volunteers as a teenager. A strong leader and powerful orator, he always championed the cause of Kannada and its people’s unity. Udayakumar fought alongside frontline leaders like Ma Ramamurthy, AN Krishna Rao, Thirumale Shriranga Tatacharya (of the Karnataka Navodaya movement), Ta Su Shama Rao, Dr Ha Ma Nayak, Ta Ra Su and several other literary luminaries for the wellbeing of the Kannada language, identity and its people through his campaigns and public speeches across the state. He also disseminated social messages with his stage plays through Udaya Kanikhethana, a training school for theatrical arts and film acting founded by him.