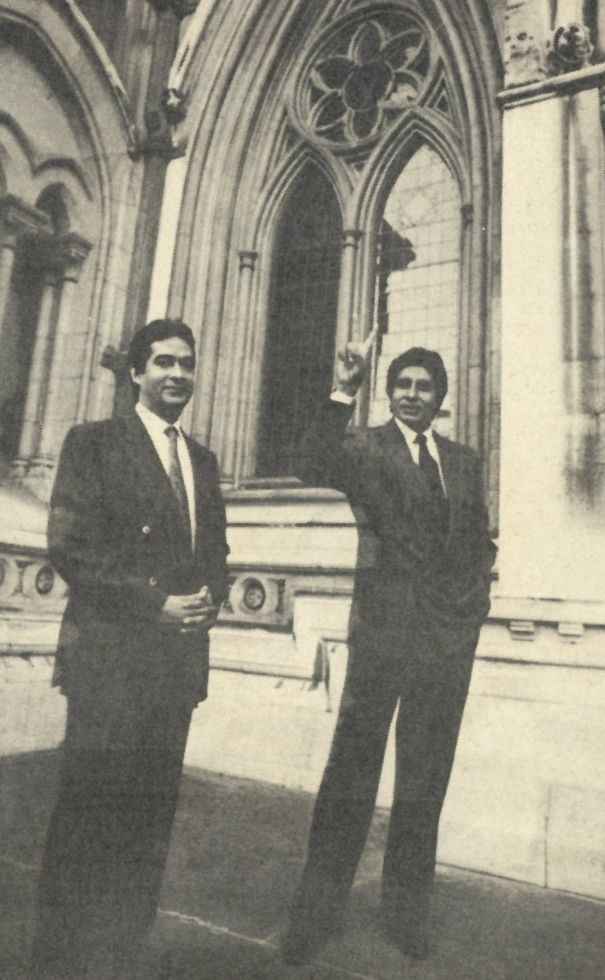 The age difference between Bunty and me is four and a half years and though this difference seems a lot when you are ten years old, as you grow older the age gap somehow lessens. That's exactly how it happened between us too. From the very beginning, we were never very dissimilar. Except that he is more practical, more organized. He is the manager in the family. I'm not as organised as he is. As kids, when we were given toys, mine invariably broke in two months, whilst his lasted for two years. The same with textbooks. While mine tore off, his remained neatly covered till the end of the year. It's funny, but after all these years, he still surprises me with an odd letter, and odd book, preserved in some old corner. He is a greater preserver. I am too, I do keep letters, gifts, but not in the way he does. Besides, these days it's a problem for me to preserve myself.

Time was when I had a lot of energy, enthusiasm, drive. But Bunty always took more initiative than I did. And it's true that he is responsible for my joining movies, but I don't think, I ever told him specifically that this is what I want to do. There is not one particular incident, moment when I have discussed with him what I desire. But, because we were always together, because we understood each other, and more important, because of those several meetings at the dining table with our parents, when ideas, arguments were shared, we were all fairly intimate with the other's mind, behaviour patterns. Maybe his this idea emanated out of that. For one day, he brought this advertisement to me and said, "Look at this. This is where you ought to be." And I said, "Okay, fine, but how does one go about it?" He said, "We'll have to first get your photographs done." And since there were no photographs, he clicked some himself. The picture that was sent to the Bombay Producers' Association, was one clicked by him. As I said, he was very enterprising. On that front, I'm a little shy. Even when I started doing my shows, it wasn't really so much my idea, as his. He was the one who virtually coaxed me into performing these stage shows. All credit on this score should go to him, his foresight. Even today, I remember our first show... He was there, bang on, supervising the show from behind the scenes. Again, in '82, when I stopped doing the shows he was the one to provoke me into re-starting them. When he realized that I wasn't excited enough, he stimulated me with big scale ideas, "You should do them lavishly. Like the Madonna and Jackson shows." And it worked! The superb managing is all his brain work. We are good as a team. He recognizes, and exploits the creativity I'm capable of. Only he does things his way. Low profile. He's never believed in projecting himself but unfortunately this is what went against him when this whole political scandal flared up!! He was painted as some kind of a wheeler-dealer, an evil wizard juggling economics, the great financial manipulator!! It felt terrible to read the kind of things that were written about him. The truth is that he is a very shy, a very simple guy, whose only ambition in life is to do well, to work hard, to explore his business and to look after his brother's creativity. But that's not what it was made out to be. They threw allegation after allegation hoping, and trying their level best to break us. We didn't. The more mud they threw, the thicker we stuck, determined to fight the scandal!

Once, I remember my brother and I sat an entire night talking. We spoke till the wee hours of the morning... We said, "We are going to fight this," exactly the way we had said, in our younger days, when participating in a boxing championship... And when you are in a boxing ring, you have a million people cheering you from outside, but inside, you are on your own, with your two gloves and your opponent. And that's how we felt. Just the two of us, and a whole wide world outside. But we said, 'Hey buddy, this is going to be tough... We are going to give some punches, and we are going to take some punches, but ultimately, we're going to knock this other guy out. And when we do, the world will see... For, in a fight like this, you may either win, or you may lose, but the solution has to be instantaneous. And we wanted the solution. It wasn't in the least bit easy... There were moments when things went wrong, moments when there were sinking lows but we bore it all... When he was down, I pulled him up. And when I was down, he pepped me up. The family has never been as strong, as it has been during these last few years... And why not, for when we have the strength of our conviction, the prayers and solace of our elders, the goodwill of our children, and the support of our spouse, what more can anyone ask for?

This article was originally published in the Junior G supplementary titled A Man: Amitabh Bachchan. The images are taken from the original article.
722 views