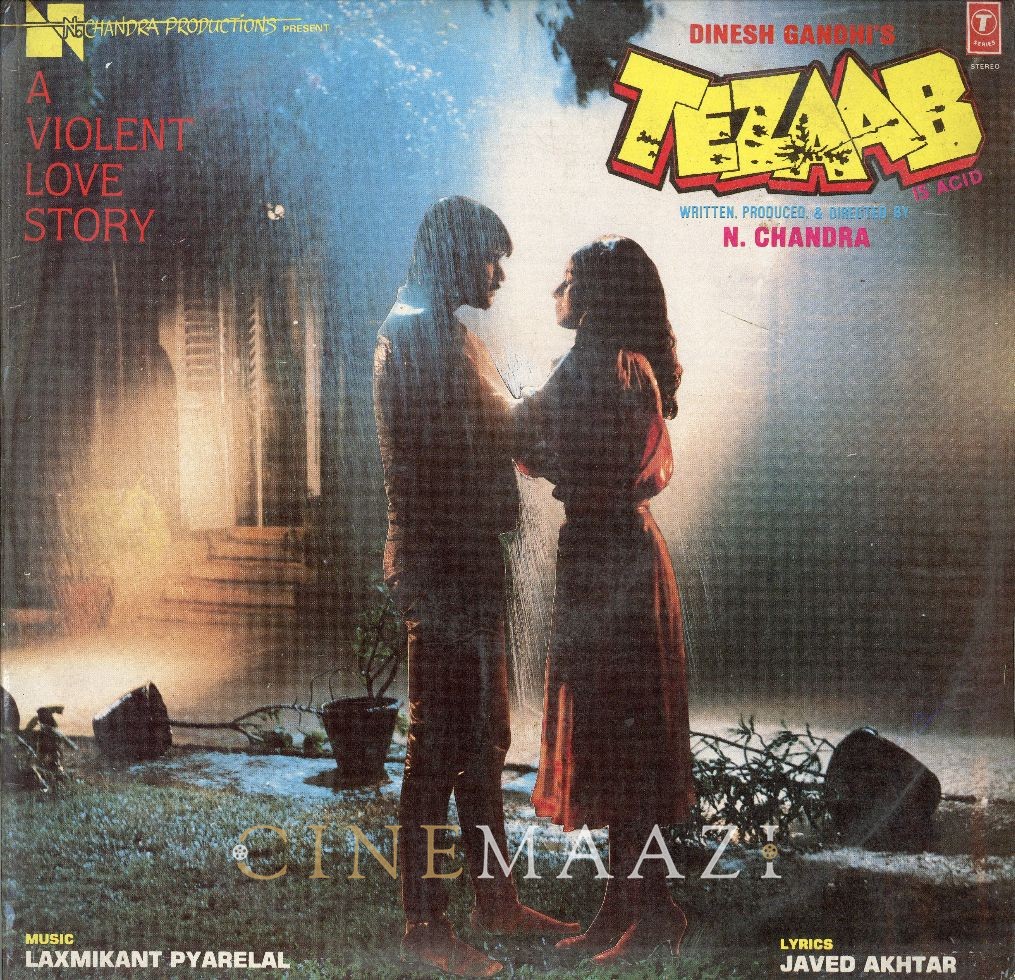 In the year 1986, as several expected blockbusters were biting the dust at the box office (Samundar, Jaal, Bhagwan Dada), an unlikely fan favourite emerged in the form of N Chandra’s Ankush. The film presented a familiar tale of four disaffected young men undergoing a moral transformation through association with a kind-hearted young woman, yet everything from its aesthetic to the way it presented its underlying message jarred with that of a conventional Hindi potboiler. The anti-hero was nothing new to film audiences at this point, as only a decade prior audiences had cheered the exploits of Amitabh Bachchan’s lone wolf Vijay (Deewar, Yash Chopra, 1975). By the mid-80’s Bachchan’s command over the box office was gradually in decline, and in that vacuum a new configuration of the hero was required. Hence the anti-hero presented in Ankush differed significantly from Bachchan’s icon of proletarian angst.

By the mid-80’s Bachchan’s command over the box office was gradually in decline, and in that vacuum a new configuration of the hero was required. Hence the anti-hero presented in Ankush differed significantly from Bachchan’s icon of proletarian angst.
Although in this article I focus mostly on films from the eighties, to trace the lineage of the new anti-hero, we need to take a step back to the pre-Vijay era, to a film that was a direct inspiration for Ankush. N Chandra had broken into the industry as a clapper for Gulzar’s Parichay (1972). He has later credited Gulzar for shaping his philosophy of cinema and aesthetics. It is little wonder then, that for his own directorial debut, he harkened back to Gulzar’s directorial debut Mere Apne (1971). The Vinod Khanna-Shatrughan Sinha-Meena Kumari starrer, was slated to be a remake of Tapan Sinha’s successful Bengali venture Apanjan (1968). Apanjan was one of the first no-holds-barred takes on the disenchantment of the youth of the nation and directly addressed the turbulent political situation in West Bengal. Gulzar modified the story to give it a more universal flair, but did not cut out the violent urbanism that it depicted.

In many ways, Mere Apne was an incredibly urgent film.
In many ways, Mere Apne was an incredibly urgent film. Gulzar’s penchant for poignant poetic moments framed within populist melodrama will seem like an odd fit for a story about violent street gangs. But the character of Meena Kumari (the veteran was severely ill at the time of production yet persevered through it), who played the role of the elderly grandmother, Nani Maa playing a transformative role in the lives of two street gangs, allows for Gulzar’s trademark humanism to shine through. Mere Apne made no bones about fact that old values of solidarity and care were coming frayed, and a tattered community was easy prey for political vultures. This is perfectly captured in the bitingly sharp Haal chaal thik thak hai. Gulzar’s script walks a tightrope between upholding certain traditional values while at the same time not completely demonising urban life, and is bolstered by a wonderful young cast of actors (one can’t help but smile at the sight of a young Danny Denzongpa, perennially accompanied by his ventriloquist’s dummy). The film has a dark climax (it starred Meena Kumari, it would be wrong to expect differently), with the death of Nani Maa and the arrest of the two gangs. For a short while the grandmother is able to reform an ideal filial society with the young men, but political opportunism soon snuffs that out. The film served as a warning about the lack of proper welfare infrastructure and the havoc it causes to social bonds.
Mere Apne made no bones about fact that old values of solidarity and care were coming frayed, and a tattered community was easy prey for political vultures.
The city presented in Mere Apne takes a much grimmer form in Ankush. While the gangs of Vinod Khanna and Shatrughan Sinha are humanised through their acts of kindnesses, Nana Patekar’s Ravi and his gang are a different breed. Moodier and more caustic in their attitudes, each of them carry with them marks of failed promises and dreams. Their only pleasure seems to be in the mockery of others. The tense yet alive neighbourhoods of Gulzar have transformed into desolate and dirty streets, very clearly a ghetto, over which Ravi and his gang hold court from a residence they have occupied. Yet change comes when they are knocked off their perch and a young woman named Anita (Nisha Singh) moves into their house with her grandmother. Anita gradually has the same effect as Nani Maa, bringing a touch of love and empathy to the lives of the young men. But while Gulzar was satisfied with telling the story of a few well-fleshed out characters, N Chandra does not stop at that. Ankush presents a more damning picture of urban existence and takes up more radical solutions to it. When Anita is raped by the owners of the factory she works in for taking the side of workers over management (class tensions are a consistent theme throughout the film), it is the legal system that fails her. Her faith shattered, she sees no recourse but suicide. The absence of any legal channel prompts vigilante action, and the last act of the film explodes in brutal and almost cartoonish violence. Ravi and his companions return to their previous violent ways, but this time with a purpose. They cold-bloodedly eliminate every single person associated with Anita’s rape, culminating in crushing the mastermind Gupta (Mahavir Shah) under the wheels of their motorcycles. Gupta is persecuted through the same streets of the neighbourhood which is inhabited by the many working class families whose lives he had destroyed. Not perhaps the lyrical poesy Gulzar advocates, but a form of poetic justice indeed. Despite an attempt to advocate non-violence at the end, the message seems to ring out loud and clear – what choice did they have?

If all these films explore the possibility of the rehabilitation of alienated young men, Yash Chopra’s Mashaal (1984) realises it, only with a twist.
These films, combining portraits of urban alienation with the popular tropes of revenge fantasies, managed to bring a grittier realism to the Hindi screen than ever before. They arose out of a situation where growing unemployment led to development of large scale ghettoes (one can refer back to the 1982 Bombay textile mill strikes and its tragic consequences). Usually centred around a particular locality, the films also call back to the German kammerspiel films of the 1920s, as well as V Shantaram’s adaptation of the genre in Aadmi (1939). The influence of gritty street films such as Martin Scorsese’s Mean Streets (1973) and Taxi Driver (1976) is also notable. But more significantly, in the face of a loss of collective spirit, these films tried to resurrect the angry young man in more grounded, sobering terms. There have been more sensitive portrayals of the issue (Saeed Akhtar Mirza’s quasi-sociological films such as Albert Pinto Ko Guss Kyon Aata Hai (1980) and the vastly underrated Salim Langde Pe Mat Ro (1989) come to mind), but these films are notable for their unique reimagining the role of the youth against the backdrop of a disintegrating city within the realm of popular Hindi cinema.