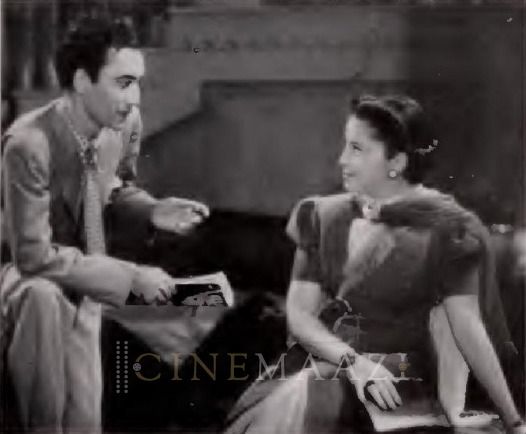 Kishore Sahu has given a brilliant picture in “Bahurani”. As a maiden production it is an excellent beginning for India Artists Ltd. Many of our aged producers would like to end where India Artists have begun in their enterprising career of production. So high is the standard of quality of “Bahurani” that one almost doubts whether the producers will be able to maintain the same intellectual level in their future productions - or will also fall a prey to the indecent lure of the box-office and lose sight of the higher purpose of picture production-for the social and cultural progress of the nation.

Kishore Sahu has fulfilled his promise and how gloriously has he done it - not only by giving us a truly beautiful picture but by backing it with his own performance which for its restraint and dignity will take a lot to be beaten.


‘Bahurani” is a picture you can’t afford to miss. It has entertainment plus instruction. And it brings India Artists into the minds of all.

In the theme of the picture is centred the main appeal to the intellectuals. Through ages the Hindu society or for that matter all human society, has condemned the bastard child of sin and heaped odium on it in defiance of rational thought and humanitarian instincts. The sins of the parents have always visited upon the children and the protest of a few philosophers has been like the cry in wilderness, going unheeded and often scorned.

Man made laws established their own standards of virtue but the laws made during the day could not justify human sins committed during the night.

Through ages the wages of sin have been unwillingly paid by the bastard child. And the sinner has always escaped. Remorse has often struck the sinning  parents but no relief was ever offered to the child who inherited the legacy of social ostracism and the odium of a bastard lineage.

For the first time on the Indian screen, this burning human problem has been vividly picturised by the producers in defiance of orthodoxy and the guardian fossils of society. To this extent the brave enterprise of India artists deserves admiration and praise.

Kishore Sahu has fulfilled his promise and how gloriously has he done it - not only by giving us a truly beautiful picture but by backing it with his own performance which for its restraint and dignity will take a lot to be beaten.

Aruna, a poor village girl born out of wedlock, meets a young Zamindar on the death-bed of her mother. Social cruelties inflicted on the mother and the child win Vijay’s sympathy for them. The mother soon dies and in a moment of emotion, Vijay promises to look after Aruna.

Aruna is brought to Vijay’s home and treated like a child of the family by Didi. Vijay’s older sister, without knowing the circumstances of her parentage. Diwanji, the trusted servant of the family, however, shares the secret with Vijay.

Aruna is happy and grows quickly like a plant in a hot-house. Vijay soon goes away to the city to complete his education. At the college he meets Mallika Rai, a sophisticated society girl. While Vijay professes to be a practical idealist, Mallika Rai impresses one as an over-bubbling theorist. And yet because of affinity of ideals, there is a sympathetic communion between the two.

Education over, Vijay returns to his village to find Aruna now a grown-up woman scattering charms all round. Vijay falls in love with her and with his characteristic honesty proposes to her. After a small family storm, the wedding takes place and Vijay and Aruna are launched into new life.

Didi who is unaware of the stigma attached to Aruna’s birth, leaves the family for a change and we are soon introduced to Lallan the younger brother of Didi who attempts to blackmail Aruna into submission to lust by threatening to expose the actual circumstances of her birth.

Vijay who had gone away to the city to bring Mallika Rai to help him in village uplift activities. Returns home with her to find Aruna on the verge of a break-down.

And from now on the story rushes fast to a dramatic climax, through thrilling suspense and awe-inspiring doubts to reach a solution that makes every one happy.

“Bahurani” has a successful story, because in addition to its being well written for the screen, it has succeeded in delivering its message in a soothing and suggestive way without creating any sharp contrasts that destroy the harmony and rhythm of life.

“Bahurani” has a successful story, because in addition to its being well written for the screen, it has succeeded in delivering its message in a soothing and suggestive way without creating any sharp contrasts that destroy the harmony and rhythm of life.

Kishore Sahu gives a star performance and surprises his many friends and critics by his superb artistry in portraying a role which in none too easy to play because of its psychological content. He did it with an admirable restraint which was at once dignified and perfect.


Anuradha as Aruna has more scenes to her share than the other artistes put together. As most of these scenes are dyed in sympathetic hues, Anuradha succeeds in securing the sympathy of every one without having to strain herself. Perhaps a greater artiste would have given more life to Anuradha’s role. Anuradha’s musical talents with their definite limitations restricted the scope of the music director who had to make up in orchestration what her voice failed to reproduce.

Rose seemed acquainted with the part she played, though her appearance (a lot of it is superfluous now) went against her. Rose is fast becoming less photogenic and unless she guards against this, we shall soon lose a useful artiste.

Pratima Devi only looked her part but couldn’t live it.

The joint effort of Mubarak and Junnarkar in direction, as their first attempt, calls for the highest praise.

Barring a couple of shots in the outdoors, the photography was very soothing to the eyes and created a very good general impression of the ability of the cameraman. The same cannot be said of the sound. It is carelessly recorded at places, though it is sufficiently audible.

Rafique Guznavi is learning to be a scientist in music. This is the second installment of his experiment in musical enterprise. The first was “Sitara.” while giving suitable and imaginative background music, he mixes too much of a foreign element in his score with a profuse sprinkling of the rumba notes. This makes the music anything but Indian. The tunes are rather somber. In the present day films, what sells is music. Rafique should remember this in future.

The joint effort of Mubarak and Junnarkar in direction, as their first attempt, calls for the highest praise. Many an old director should blush with shame seeing the measure of success achieved by these new comers. Theirs is a glorious debut and we can only wish them greater success.

‘Bahurani” is a picture you can’t afford to miss. It has entertainment plus instruction. And it brings India Artists into the minds of all.

This is a reproduction of the original published in Filmindia, July 1940.
647 views