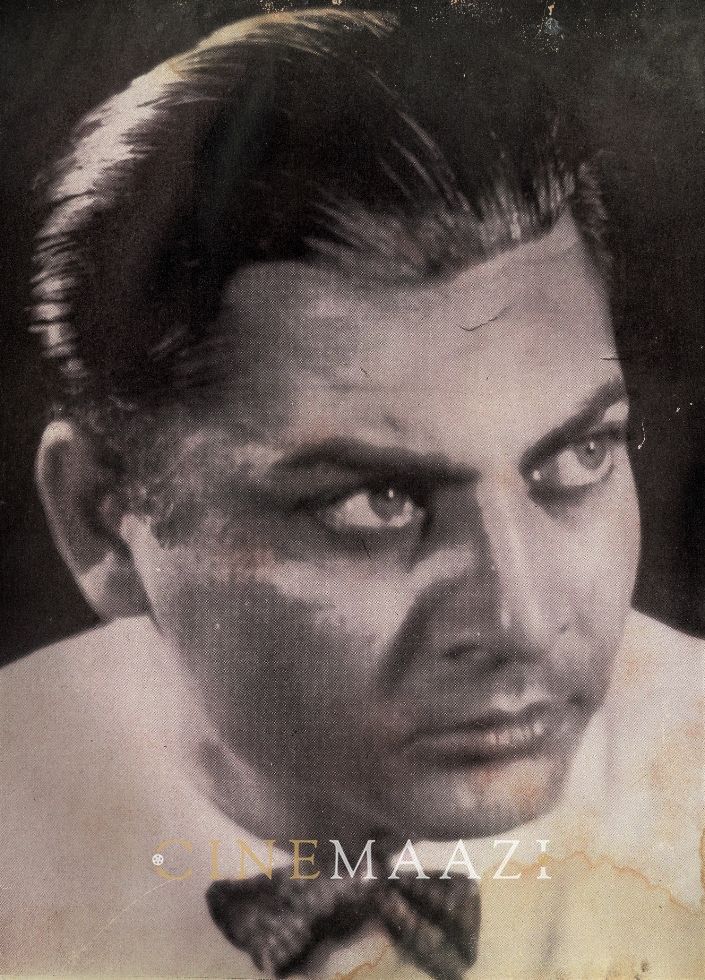 Chandramohan, bad man of the screen, has achieved a position in the film world which is the envy of the sob sisters and the heart-of-gold romantic actors

His professional villainy ropes him in enough money to win him the title of the highest-paid star in India. Who wouldn't be the wickedest of villains for Rs. 3,750 -a month.

Having heard so much about this Kashmiri Brahmin Chandramohan Wattai, I arranged to have an interview with him so that I could see for myself if he was as fierce as he looks on the screen.

Now mind you, I had already heard rumours about the man. I had heard he was an egoist and terrific brag and also that he was a heavy drinker.

Being a gentle creature myself I confess I was a little nervous about the interview so I arranged to meet the "villain" in "Filmindia's" office where numerous clerks and typists (to say nothing of Baburao Patel) could rush to my assistance.

On coming face to face with Chandramohan I sniffed the air to see if it was laden with an alcoholic odour. Having satisfied myself that everything was perfectly normal I took stock of the actor. He is of medium height and inclined to be fat. He is 35 now, and at 45 I prophesy he will have several double chins unless he exercises a bit more.

Nevertheless he looks distinguished on the whole. His hair is very grey but it is a premature greyness which started when was a youth of 18. His eyes are his most striking feature. They are really fierce even when he smiles. They are grey-green in colour and very much like cat's eyes.

I first asked Chandramohan about his people and he told me that his father was a member of the Court of Wards in Gwalior State and his grandfather was the Dewan of Kaurali State.

Chandramohan as a school boy was naturally clever but not studious. When I tried  to question him
about his school days, he shut up like a clam and said he would rather not say anyting. I don't know whether this is because he is too modest to talk about all his scholastic achievements (this is not like Chandramohan) or because he was expelled from school for being a naughty little boy. Anyways I do know he has no academical qualifications but he feels that he has inherited culture from his parents and added to this he has a natural intelligence which makes him able to talk intelligently to the most learned of men.

You would think that with parents as wealthy and important as his, Chandramohan would have been launched out on a career with the greatest of ease. But when Chandramohan reached manhood his parents had both died and he was generally looked after by guardians. These guardians, however, did not share the same views as young Chandramohan and like most elderly people felt they knew best. So Chandramohan left home on March 10th in 1930 and went to Delhi. He had hardly any money and no training but through the influence of some friends, he got a job as manager of a cinema. He had more than one job like this and was also manager of Mangal Talkie Distributors.

Then came a turning point in Chandramohan's life. He went to Poona to negotiate for Sairandhri a film which Prabhat's were making in Kolhapur. At Prabhat's, he met Director Shantaram who thought he'd make a good actor. At that time Chandramohan did not want to be an actor but when Baburao Pendharkar left Prabhat's he was asked again to join the company. This time he agreed and started playing leading roles immediately. This was in 1934.

His first film was Amrit Manthan (1934). He was dubbed a villain early in his career because the directors thought he looked villainous.

Chandramohan enjoyed working at Prabhat's and thinks Director Shantaram is one of the best directors he has met. However, on one point Chandramohan and Shantaram did not agree. Shantaram was continually saying "We are Prabhat. We make or break people', and things like this which gave all the credit to Prabhat's. Now Chandramohan felt that a fair amount of credit should go to individual actors, and so that same spirit which fought against his guardians' dictatorial attitude, rebelled, and Chandramohan left Prabhat. This was in 1936.

In 1937 Chandramohan joined Huns Pictures in Kolhapur. He says "everything there was a racket and I didn't stay long."

Then in 1938 he joined the Minerva film company but didn't stay long with them either.

You will be thinking by now "this fellow Chandramohan seems a disagreeable sort of chap. He seems to be continually quarrelling with film studios."

I thought that too and I asked Chandramohan about it. He said "I'm a very good quiet boy until I'm provoked and then heaven help the man who provoked me. Looking at his fierce eyes I resolved not to rouse his anger and then realising I was being stupid I said to myself "You worm, how d'you think you are going to get an interesting interview if you are too scared to ask impertinent questions?"

AFRAID OF A WIFE

So I roused myself and said, "Mr Chandramoan, tell me why you haven't married", and in quite a docile manner he replied "I haven't married because if i did I would lose my individuality and I wouldn't be able to take chances. I am very ambitious and adventurous, but if I had a wife she would be a responsibility and she would cramp my style. If I marry a quiet retiring home-girl she will suffer in silence while I continue to live in my haphazard fashion but her very silence will make my conscience prick and irritate me. If I marry a modern go-ahead girl she will nag at me because my main interest will be my work and I will have very little time for her. Now if there's anything I can't bear, it's a nagging woman. No thank you-this man is not going to marry-ever!"

All you pathetic bachelor ladies who dream fondly of this flashing eyed villain at night, had better let matrimony drop out of your dreams.

This nomad Chandramohan who wanders from one film company to the other is now free-lancing. He is one, (if not the Best) of the best character actors in India and loves his work. He says "I never work for money (that rolls in automatically) but only to satisfy the artist in me," If our money rolled in automatically and in large sums we would not work for money either! Chandramohan is idealist enough not to work at all cannot work for work alone. He has practically directed some of his films and all these films have been successes. He says "No picture I have acted in has been a failure because of me, and many pictures have succeeded because I have acted in them. I like to be able to express my own ideas about how I should play a scene. A director must say what he wants to say to the public through the artiste, but the artiste must have some say in the matter. If director could act they would not need to have artistes to put over their films, but as long as they can't act they must allow actors more scope for interpreting the role in the way they think is best,"

Chandramohan spoke so feelingly on this subject that I was almost tempted to ask him if he'd like to get all his grievances off his massive chest.

I changed the subject and asked Chandramohan to tell me more about his life. This is what I drew out of him. Like Garbo he likes to be 'alone' at times so he lives by himself at Churchgate and has friends over when he feels like company. With these friends, he shares his good whisky. He says his 'drink bills are enormous though has never actually drinks too much himself.

Feminine-like I advised him to buy some of those tabs doctors stick on medicine bottles to mark the doses and to stick some on to his whisky bottle so that people wouldn't help themselves too generously. But Chandramohan thought this would be too broad a hint, so he'll just continue to pay enormous drink bills.

TEACHING EVEN THE YANKEES!

He says he's fool where business is concerned. If so, then he's a lucky fool. His ambition is to go to Hollywood and to act in films about India. He would like to do 'horror' picture there. He also feels he can teach the Americans a thing or two about acting.

He'll probably go to Hollywood two years after the war is over, and when things will have settled down to normal. Chandramohan has very strong likes and dislikes. He dislikes swollen-headed people and mischief makers. He dislikes to see Indians dancing European fashion and he dislikes men who pretend to be very goody-goody. He says "Man is a compound of good and bad. If a man is not that he is not a man."

Chandramohan's great passion is racing and he hopes to own a horse soon.

For a change, he would like to act in a comedy of the Buster Keaton type where the characters would be serious but the situations funny.

As a parting shot I said to Chandramohan "People call you a brag." What have you to say in defence?"

Take it from me, this swashbuckling black sheep of numerous films though he may not be exactly modest is a fine fellow and a wonderful actor.

This article was originally published in Film India's December 1941 issue. The images used in the feaure are from Cinemaazi archive and was not part of the original article.
753 views