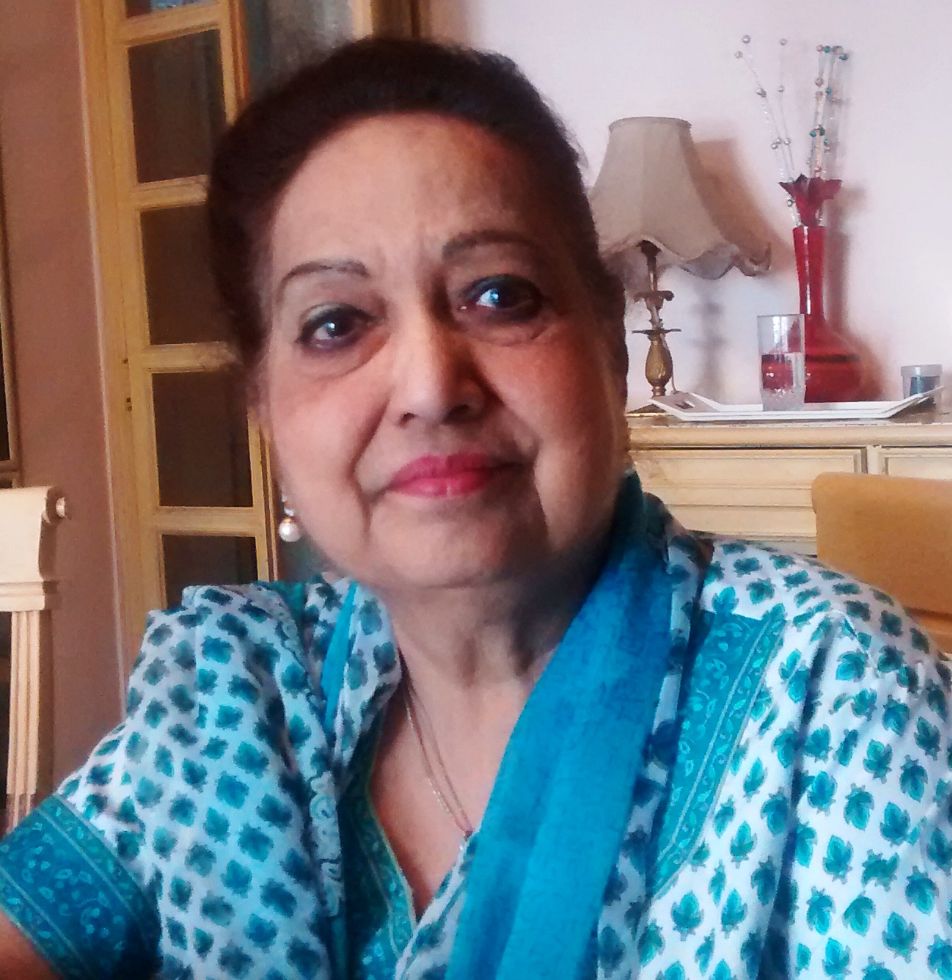 My efforts in finding forgotten artists of Hindi cinema, interviewing them and finally getting firsthand exposure to their pains, problems and frustrations inspired me to write the story Raja Saranga Majha Saranga. It was published in 2007 in the quarterly literary magazine Kathabimb and is also available at the following link on another (literary) blog of mine named Vyangopasana.

In reality, I myself am the hero Shashank of the story and I have written the following lines in the story to describe my state of mind and feelings at that time:-

“…And then one day in an emotion-filled voice he said, ‘I have heard your name from my parents since childhood. Even today there are lakhs of people of their generation who want to know where are you and how are you? I came to this city leaving my parents behind. They will be thrilled to read about you and I want to see them happy at all times."

Since childhood, I used to listen to my mother talks about her two favorite actresses, namely, Shyama and Shashikala. That’s why I started my Weekly Sahara Samay’s column Kya Bhooloon Kya Yaad karoon with the interviews of both these actresses. Both these interviews are available on this blog. It was when I had visited Shyama ji’s house on the famous Napian Sea Road of South Bombay, that I met actress Shakila who was visiting Shyama ji. Shakila ji gave me her number, invited me to her house but politely declined my request to interview her also. Her contention was that forty years had passed since She parted ways with the film world and It was futile remembering those old times.  I kept contacting her for nearly six months in an attempt to convince her to give the interview but her answer remained the same. Finally, I also stopped pestering her for an interview.  Some years later when I met her again at the Dada Saheb Phalke Academy Award presentation ceremony, she did not remember me. I also did not take this seriously. However, as fate desired, many years later, I got an opportunity to go to her house as an unexpected guest and during our conversation took her interview also!


According to Shakila ji, her father also passed away soon after. Her aunt Feroza Begum had got engaged to a prince named Shehzaad but he too passed away while playing a cricket match in London even before the marriage could take place. As a result, her aunt decided to remain unmarried thereafter. It was her aunt, who had brought up the three girls and who had educated them at home itself.

Shakila ji recalls, “My aunt was very fond of watching films. I used to accompany her to the film shows and got inclined towards films too. We were family friends with Kardar and Mehboob. We used to meet on Eid and were regular visitors to each other’s houses. It was Kardar who offered me the role of a 13-14-year-old girl in the movie Dastaan (1950). This movie was released in 1950 and marked my film debut. It was for this movie that I adopted the stage name of Shakila instead of my given name of Badshah Jehan.

When Homi Wadia tried to approach her for this movie, in order to avoid the offer, her aunt quoted the then astronomical sum of ten thousand rupees. However, Homi Wadia agreed to that as a remuneration without any deliberation. Under these circumstances, Shakila was forced to sign up for Alibaba Chalees Chor (1954) in which she was cast opposite hero Mahipal. This 1954 release became so popular that she started getting offers only for Fantasy and Costume Dramas.

After Dastaan (1950), Shakila ji played children’s characters for the Gumasta (1951), Khoobsoorat (1952), Rajrani Damyanti (1952), Saloni (1952), Sindbad the Sailor (1952) and Aagosh (1953), Armaan (1953), Jhansi Ki Rani (1953). In Sohrab Modi’s Jhansi Ki Rani (1953), Shakila ji played the role of a young Rani Lakshmibai (whose elder role was played by actress Mehtab). The movie Madmast (1953) marked her debut as a lead actress where she was cast opposite actor N.A. Ansari. This movie is also known as the first movie for which Mahendra Kapoor sang for. He had sung his career’s first song kisi ke zulm ki tasweer hai mazdoor ki basti with singer Dhan Indorewala. Shakila ji did lead roles that year in two more releases Rajmahal  (1953) and Shehenshah (1953) also.


Shakila gained recognition with 1954’s superhit movie Aar Paar. Its hero was the film’s producer-director Guru Dutt. It was his first film as a producer. O P Nayyar also tasted success first with this movie. His previous three movies Aasmaan (1952), Chham Chhama Chham (1952) and Baaz (1953) had all flopped miserably. Along with Shakila ji, the film Aar Paar (1954) had another heroine, Shyama also.


Shakila ji remembers that after the success of Baiju Bawra (1952), actress Meena Kumari who was the star of Homi Wadia’s Basant Pictures religious and fantasy movies like Veer Ghatotkach (1949), Shri Ganesh Mahima (1950), Lakshmi Narayan (1951), Hanuman Pataal Vijay (1951) and Alladin Aur Jadui Chiragh (1952), had become busy with social movies. She could not give dates for Homi Wadia’s next fantasy film. At the same time, Shakila had already been christened as ‘Arbi Chehra’ (Arabian Beauty) in the film fraternity. When Homi Wadia tried to approach her for this movie, in order to avoid the offer, her aunt quoted the then astronomical sum of ten thousand rupees. However, Homi Wadia agreed to that as a remuneration without any deliberation. Under these circumstances, Shakila was forced to sign up for Alibaba Chalees Chor (1954) in which she was cast opposite hero Mahipal. This 1954 release became so popular that she started getting offers only for Fantasy and Costume Dramas.


Shakila ji tells us, “I got married in 1966. My husband was from Afghanistan and was its Consulate General in India. After marriage, Shakila ji went to Germany. She spent nearly twenty-five years in the USA and Germany. She used to occasionally visit Mumbai where she had a house and where her sisters used to stay. Due to personal reasons, one day she had to return to India for good.”

Her younger sister Noor was also an actress. After acting as a child artist in movies like Anmol Ghadi (1946) and Dard (1947), she had played important characters in movies like Do Beegha Zameen (1953), Alif Laila (1953), Naukri (1954) and Aar Paar (1954). She bid adieu to films in 1955 after she got married to the popular comedian Johnny Walker.  Shakila ji’s youngest sister Ghazala (Nasreen) is a housewife. Both Noor and Nasreen stay in Mumbai. Though it has been over 50 years since she parted ways with the film industry, she remained good friends with actresses of the period like Jabeen, Shyama, Azra, Waheeda Rehman, and the late Nanda


The effect of old Age was clearly visible on the memory of Shakila ji who passed away on 20 September 2017 at the age of 81 in Mumbai. She was suffering from acute diabetes and kidney-related problems for the last one year. It was nothing short of a miracle for me to have been able to complete this interview. The full credit for this interview goes to Actress Azra ji and her maternal cousin Shri Salim Shah who is a regular reader and admirer of Beete Hue Din. It was both of them who took me to Shakila ji’s home and they were instrumental in convincing Shakila ji to give this interview. We had been accompanied by the wife of Shri Salim Shah too. The Shah couple is citizens of the USA and was visiting India at the time.


It was this miracle which I had mentioned at the end of the interview of Azra ji: