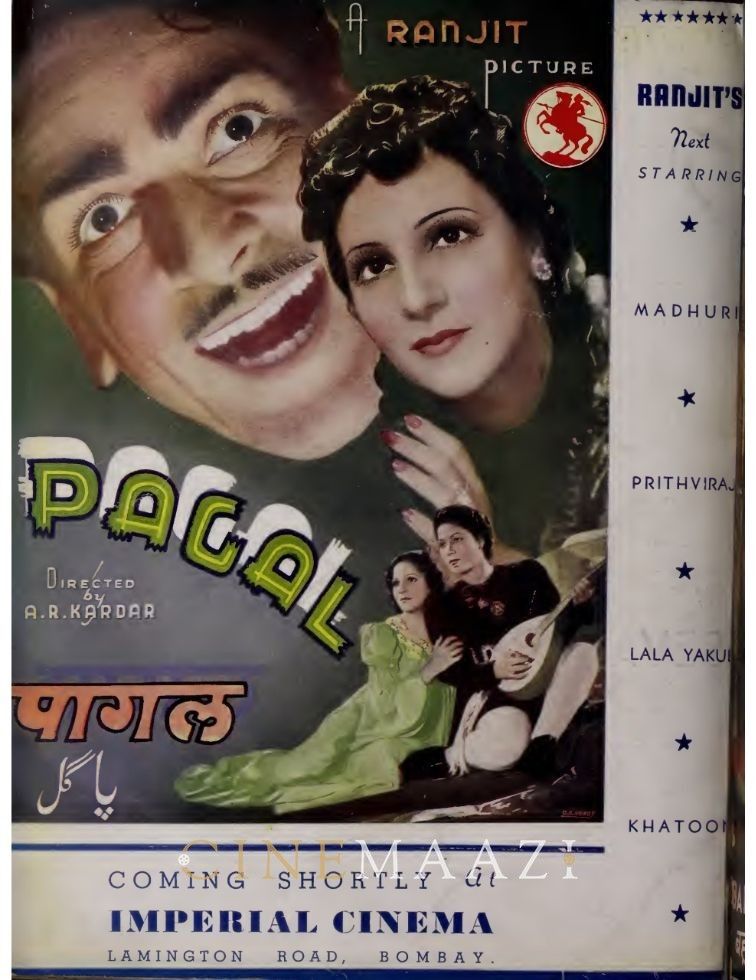 Here is a picture that makes you forget Hollywood for a moment: it has that streamline-touch which makes Hollywood pictures smart and clever.

It has a theme that intrigues and entertains. Its development is psychological and within natural limits of intellectual understanding. The main motif of the drama is love within the heart of Dr. Vasant or for that matter any doctor or any human being. And we are shown how this love passes through indifferent environments to emerge as an all destroying fire that maddens the man who struggled to harness it.

The hero of the story is a well-known doctor, young, handsome, popular, honest and imaginative. He is in charge of a mental hospital and strangely enough he is also popular with his mad patients. He is the only son of his parents-two simple minded, well-meaning folks who, in their utter sincerity of love, wish to get him married well.

A combined photograph of two sisters is shown to the young man. He falls in love with one but somehow the parents misunderstand and get the other married to their son.

On the wedding night, the tragic mistake is discovered by the hero. He runs out of the bridal chamber and out of the life of the woman who had become his wife.

Though spiritually a stranger to his companion, the man is compelled to live in the parental home and pursue life with a pretence of apparent satisfaction. The honest doctor is too imaginative and of too fine a fibre to accept this compromise. The sight of his wife reminds him of his love for the other sister. Very soon this love kindles a desire.

This desire gives predominance to the evil inherent in every man. The erstwhile glowing flame of love that had warmed the heart now becomes a fearful fire fed by desires.

THE DEVIL IS BORN

The young doctor rushes to his mind to find relief. Obsessed by desire the mind suggests only destructive methods. The doctor uses his knowledge of medicine to make his love-bird a helpless victim of his science. In the cradle of desire, the devil is born.

He injects a medicine and makes the girl mad and in her madness as his patient makes love to her. His assistant stumbles against the truth and tries to save the girl. The doctor gets furious, loses control of himself and goes mad. The girl is saved but her sister-the wife-is throttled to death by her mad husband.

One more young man gone west because two foolish parents did not study their son’s problem from his point of view and in their blind affection thought that they could not do anything wrong. Was he not their only son? They knew as parents what was the right thing for him. This idea ingrained in parents through ages is often responsible for major tragedies in the lives of our young men.

The modern youth, specially during this transitional period between orthodoxy and modernity, is a problem to be individually studied in the light of the day to day developments. The sooner the old fashioned parents realize this truth the better will be the lot of our dreamy youths who in their thousands either shamefully compromise with life or commit suicide. Half the tragedies in the joint Hindu families are due to the orthodox outlook being applied as a measure of judgment to modern problem. In the symbolic role of Dr. Vasant, Prithviraj has lived his part and in doing so has made me swallow my own words: “Prithviraj can merely act but I doubt whether he can live his part. “From “India Today,” through “Chingari” to “Pagal”, Prithviraj has gone from one great performance to another.

His artistry is supreme in this picture and admits comparison with the best talents in Hollywood.

Knowing that pictures are shot in stray bits and with sequences topsy-turvy, it is marvelous to note the psychological continuity of the progressive madness maintained by Prithviraj from scene to scene till it reaches the supreme climax of a riotous melee of emotions.

Never before has the Indian screen recorded such a great performance which has given India its truly great actor. Prithviraj’s performance so completely covers the screen and the and the mind that one does not notice the faulty and unpardonable accent of Madhuri nor her immobile Anglo-Indian features, nor her inelegant and entirely unsuitable coiffure all of which contribute against the actual requirements of the role she plays.

Perhaps her most important role, Khatoon has played in this picture. While her effort was sincere, it fell far short of the ideal and only proved the strict limitations within which her talents can be framed. She killed many a good situation because of her inability to reach the intensity demanded.

Sitara once again acts the sophisticated college girl, a role for which she is not born, and does everything that a college girl does not do. However, her bit in the costume sequence of Romeo and Juliet is quite good.

For once Charlie’s antics were correctly framed and because of the slight dose and restraint, the performance looked quite appropriate and became popular even among the intellectuals.

The greatest thing, however, about the picture is the direction of A.R. Kardar. After the fiasco in “Holi”,  he has come on surprisingly well with a stunning piece of work which is at once great and imaginative. Incidentally, this picture is his best directorial effort in his long career. The picture is not only a brilliant study in technical excellence, but is outstanding in the psychological use of the camera and the lights-not to mention the clever use of the scissors.

“Pagal” is Kardar’s best. The other two good ones I liked were “The Kick” and “Chandragupta.’

The photography, while being least obtrusive, gives life to the picture, though I wished the theatre had used a high intensity are and had reproduced the sound better.

The songs in the picture have nothing much to recommend but the dialogues can be called brilliant in parts and good generally.

Well “Pagal” is a picture you must not miss. It is our first streamlined photoplay and you will like it in spite of yourself.

This is a reproduction of the original published in Film India, August 1940.
633 views