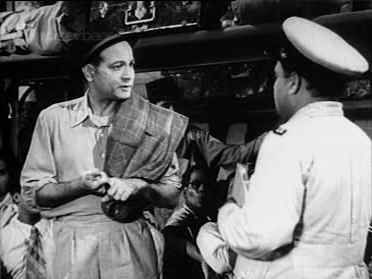 Image from the original article

“How’s film-life after fifty?” The question is apt, but apter still is the rollicking answer provided by the veteran Motilal, “Well, after fifty, life in films holds out the promise of a new epoch in your career. For me, it is buoyant, bristling and boisterous as ever”. At 52, this hilarious, heart veteran reveals an amazing zest for life. His occasional illness has failed to blunt the edge of his bubbling, youthful personality and spirit. “I’m more alive and more kicking than ever before”, he cracks with typical bonhomie.

Discovered for the screen when on a casual visit to Sagar Studio at Bombay by director K.P. Ghosh, Motilal has almost remained a film legend for the last thirty years. “Not knowing him, I mistook Ghosh for a ghost the way he stared at me while spotting me for my first film role”, says Motilal and adds, “K.P. Ghosh is the most intelligent director I have worked with. I am really proud of him”.

A veritable scene-stealer whether it is light comedy or a serious role, Motilal has always walked away with acting honours. His superb ease and true-to-life aplomb have been the despair of lesser thespians. From the time of his debut in Sagar’s Shaher Ka Jadu (1934) down to his latest role of a prosecution counsel in Lone Stars’ Yeh Raste Hain Pyar Ke (1963), giants have fallen and newcomers have vanished in the whirligig of time, but Moti has remained the same master of histrionics, unruffled by the vagaries of time or adversities of the film-tide.

Ranking among the pioneers of film acting who started the vogue of “film-hero-worship” on a mass scale for the Indian screen. Moti has started several laudable excursions and projects off-screen. He took a party of film artistes to entertain our Jawans on the Kashmir front as early as 1950 and the idea of a Film Club was originally conceived by him. He has played an important part as an energetic member of the Film Functions’ Committee and was actively associated with the earliest Film Star cricket matches in aid of charities.

Sociable and helpful, Motilal has an old-world charm about him. Nothing pleases him more than a meeting with an old colleague or the renewal of an old tie. During his last visit abroad, he personally went to four of his early leading ladies, Sabita Devi, Maya Banerjee, Madhuri and Rose, who were then in Europe, and was delighted to meet them after years. When asked to show one of his most prized collections in his film career, he showed this correspondent a letter with tears of joy and gratitude. It was a recent letter from his first director K.P. Ghosh in which “K.P.” had written: “Moti, I’m very proud of you. You have my blessings always”.

“Where to find such ties even after 40 years in the present-day film world?”, Moti asked in a voice choking with emotion. His flair for offbeat films has led him to invest his earnings in his independent production venture Chhoti Chhoti Baten (1965), now completed.

Cinemaazi thanks Sudarshan Talwar and Cineplot for contributing this interview which was conducted in 1963.