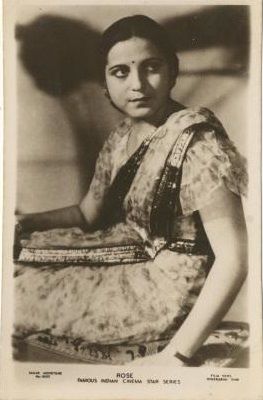 The film language is one of superlatives, where stupendous, colossal and divine are the commonest of words.

Nevertheless, I cannot use any of these exaggerated expressions to describe Rose. She is not smoulderingly exotic or utterly sugary sweet. She is just plain nice, and when I say it I mean it as a compliment. She is the sort of girl who would be equally at home in a college classroom as in a film studio.

She does not carry her film poses into her private life. She proved this by not keeping me waiting for our interview as most celebrities would.

Rose is very 'chic'. When I saw her she had just returned from Juhu and was dressed in green slacks. She looked very young and fresh and has a lovely creamy skin which she never powders. She uses only lipstick and with her vermillion lips and glossy black hair she looks slightly Spanish.

She says that she usually avoids interviews with magazines because they usually ask her such ridiculously silly questions. "Filmindia" she says "is different. It is a magazine which is not afraid to be frank and which states its views in an in an intelligent way."

Rose is a Jewess. She is an only child and was born in Calcutta. As an only child, she was spoilt. She was given every conceivable sort of toy by her doting parents. She was a clever child and passed her Senior Cambridge exam. at fifteen. Her father Mr. Musleah was private secretary to the Consul at Costa Rica, Sir B. B. Bannerjee who was the son-in-law of the Maharaja Jatindra Mohan Tagore.

Rose when she left school wanted to become a doctor but she was not a very strong child and her wealthy parents persuaded her to give up the idea.

Anyway, she eventually became a private secretary like her father and as if this wasn't enough she also taught ballroom dancing after work.

Then Rose got married at the early age of sixteen and became Mrs. Ezra, but she is just plain Miss. Musleah now because in her religion a woman takes back her maiden name after divorce.

SHE JOINS THE STAGE

Rose enjoyed the placid life of a married woman and had two children but she was still hardly more than a girl eager for excitement. So when some of her friends suggested that she try acting because she was attractive and had a natural flair for acting, she was only too pleased to try. So Rose Joined the stage and became a very unimportant actress but she worked hard and worked her way up. On the stage she gleaned a great deal of experience under Agha Hasher, the famous poet and writer.

In these days the language difficulty was a great problem for Rose, All her life she had spoken English and in school she had been taught only English and French, so she had to learn a completely new language and learn in pretty well. Rose says "It doesn't matter so very much when a film actress has a poor command of the language because she can't see nor near the audience reaction, but a stage actress is often booed and hissed at if her grammar is faulty."

Anyway, when Rose felt that her stage work had given her acting the necessary polish, she went to the late J. F. Madan with a letter of introduction from the owner of Tollywood Studios, and she starred in Pati Bhakti (1922) and other films for him.

Then the wanderlust possessed her and she came to Bombay in 1935 where she joined Imperial's first and signed a two-year contract with them.

Now Rose is free-lancing and likes it better this way because she can make a film just when the spirit moves her and she has a variety of players with whom to act.

Rose's career has not been and easy one. She did not become a star over-night. She worked her way up the hard way.

She loves her work but is not foolish enough to believe she will always be a famous star. She knows that after several years, stars lose their popularity and give place to newer stars. Rose is still very young and the day when she will have to leave the films is far ahead, but she has planned already what she will do with the rest of her life. She has always longed to own a dress shop and sell fashionable clothes for Indian ladies. Rose says "When I open my dress shop I will have mannequin shows at the exclusive hotels like Pompadour has only much better. I'm crazy about clothes and I think the Indian sari is the most beautiful of all dresses. Look at these earrings I'm wearing You won't find copies of them anywhere in Bombay because I have them made specially for me. These I've got on are made of buttons fastened to clips. I ransack the shops in Bombay in order to find original articles of clothing and quaint jewellery."

"Tell me about your children Miss Musleah" I asked next, and Rose said "Perhaps I should warn you that once get me on to that subject you won't find it easy to stop me. My children are more like sisters to me. Indeed my eldest girl Marjorie is as tall as I am. We tease her by calling her 'our Amazon' because she is so tall and sturdy. She wants to be an artist and interior decorator when she's grown up and my younger girl Cynthia who is eleven wants to be a lawyer. I have taught them how to dance and they dance better than many of the so-called ballroom dancing experts in Bombay. When I come home from work in the evenings I turn on my radiogram and I dance with my daughters. I'm never too tired to dance because I find dancing a relaxation. Even though this sounds like bragging I must tell you that both my children are exceedingly bright at their lessons and have very artistic temperaments."

At this point our interview was interrupted by Rose's butler who brought in a tray of deliciously cool drinks and this reminded me to ask Rose if she was domesticated.

"Domesticated? She hooted, "Why I loathe housework. Mind you, I like staying at home in preference to gadding about but I certainly don't like house-keeping."

"Then what else do you do at home besides dancing with your daughters" I asked. "I lie in bed and read books by my favourite author Somerset Maugham." she replied. "look in my book-case and you'll see my large collection of his books."

"Don't you have any hobbies?"

"Well", Rose replied, "I don't know if you'd call it a hobby exactly, but I collect various kinds of perfumes. There in that book case you'll see my collection. I use a new perfume for each of my many moods. "Oh, so you're a moody person" I said "Well," said Rose "if I say I'm moody, you'll think I'm claiming to be temperamental because great actresses are supposed to be temperamental."

FELL OFF HER BIKE

Of course I assured her that she was an important enough young lady to throw fits of temperament whenever she wanted. Actually, once Rose is at home she forgets to be a star and becomes just a simple young girl. She is not fond of violent exercise but she did try cycling once, only she fell off her bike and her daughters laughed so much at her, she thought she'd better give it up in case they lost all respect for their mother.

She also tried swimming at the Cricket Club but she was embarrassed by the crowds of young men who flocked round to see what a film star looked like in a bathing costume.

She is always being besieged by her college boy fans. When she is out in public she is often recognised by them, but instead of calling out to her by her name they call out the names of all the films she has acted in.

She thinks she is quaint.

"Once" she says "I was making a film in Benares and I was supposed to be a sweeper woman. We were on the river banks and nearby was a large impressive looking building. The director asked me. In this particular scene that I was, to sweep the steps of the building. The cameras were working and I was busily sweeping the steps when I heard loud derisive laughter above me and male voices told me just where to sweep. To my horror I discovered that I was sweeping the steps of a boy's college, but somehow I got through the scene. If you've ever acted as a sweeper woman with an audience of convulsed college boys shrieking at you, you'll know how I felt."

BEAT THE GOVERNOR OF C.P.

Last year a number of celebrities were asked to appear at a War Fund function at Nagpur. Rose was one of those asked to appear. When she arrived at Nagpur Station she was mobbed by college boys who had come to get a glimpse of her as she really was. Rose says "They looked at me with wonder in their eyes because I was simply dressed and because I chatted to them as though they were old friends of mine. I think they expected me to arrive wrapped up in cellophane and accompanied by a retinue of liveried servants.

"Anyway, that night the hall was packed and the Governor of the C.P. who presided said "They are quite used to the sight of me ; it's you they have come to see Miss Musleah."

Rose was the centre of attention and was feted by everyone.

Rose next told me more about her work. She says that she likes to play simple country girl roles best and feels that her part in It's True has been her best role to date.

Unfortunately she been typed in college girl and sophisticated roles but she's going to break away soon and do simple girl roles.

Her new film which she has just finished is "Garib" and in it she plays the part of a rich girl.

She likes acting best with Motilal and Prithviraj, because they are excellent actors and the nicest of people to work with.

She dislikes actors who show off because they are thinking of themselves only as big stars and not as artistes.

Altogether she dislikes men who are superficial.

In Calcutta, she met Merle Oberon at tennis parties, but did not dream then, that Merle was going to achieve stardom abroad or that she herself was going to achieve stardom in India. She is very modest about her achievements, is Rose, and I had to almost bully her into telling me about herself. She would have talked about her children all the time if I had let her because she is really devoted to them.
Looking at her it is hardly to imagine she is the mother of such big giels because she is hardly more than a girl herself.

I asked her if she has planned to marry again but she says she has no matrimonial plans for herself because she is too busy working hard for her children and planning for them. So all you poor fools, who sent Rose letters proposing marriage remember that for the present at any rate, Rose's theme song is “My heart belongs to my babies,"

This article was originally published in FilmIndia in the November 1941 issue. The images used are not part of the original article.
624 views