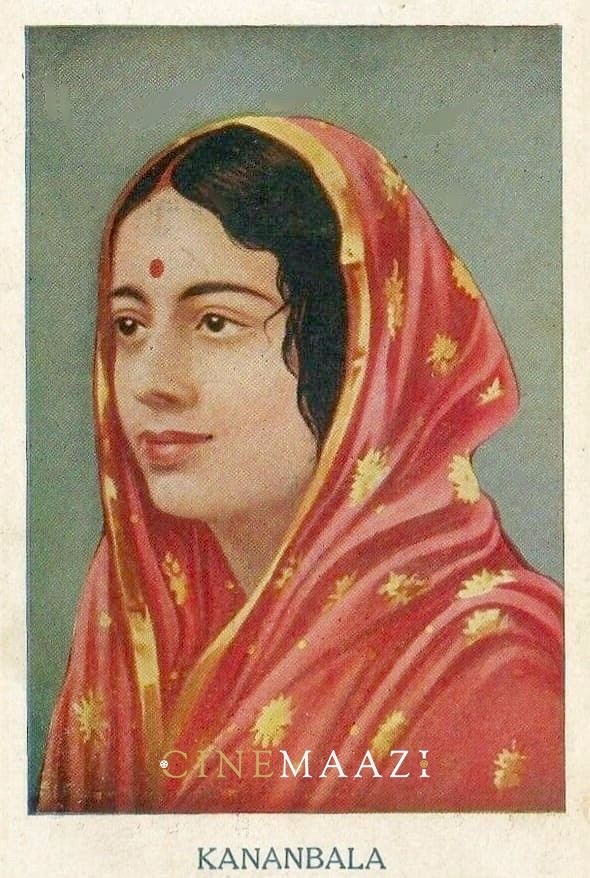 Kanan Devi, the ‘First Lady of the Indian Screen', gives you in this article, written in a mood of retrospection, an intimate glimpse of the things she has seen and felt in her colourful screen career, synchronising with the growth and development of the Bengali screen.

The Silver Jubilee of the Indian and the Bengali Talkie is an event of events that cannot fail to bring intense feelings of pride and joy to every one born to it and bred by it. Whoever has lived down all the thrills and anxieties that the quarter-century of its uncertain, and yet by no means insignificant existence offered may pardonably have on such a day a touch of nostalgia. After all, twenty-five years is no small stretch of a period in a lifetime, whether on the individual or the collective plane! Its memory must be teeming with strangely sweet and sad thoughts ranging over a long space.

It was those golden days of the silent screen, and after luck favoured me with an opening which many would die for, I had my interest sharpening with each and every role I was then called upon to interpret.
As a humble devotee at the altar of art that has found its legs and voice within the matter of this eventful period, bringing joy to millions of homes, for both the rich and the poor, for yesterday's adolescents and today's grown-ups, I may say that I also have loved and worshipped the films which have been for me the breath of my life. Today, almost at the fag-end of my career, I cannot help casting a lingering look behind. Glad and sad tears moisten my eyes dimmed by all we remembrances of its chequered fortunes that come rushing on the mind. It is indeed difficult to put into words the mingled emotions with which I find myself seized. But the feeling that rises uppermost in my mind today is one of utter exaltation to be able to know and feel I have loved all through my life to serve my art. With all my consciousness of personal failings and limitations, it cannot be denied that the industry has reared itself up through these twenty-five significant years on the blood and sweat, the tears and smiles of everyone who tolled to build up its edifice. And if anyone would care to share the feelings of one such humble worker in the temple of film art, here they are.

As I look back over the years, I can almost see myself restored to my girlhood, bubbling with its guileless pains and pleasures. Almost a tiny child in knickerbockers, I broke into films which, just on its starting path at that time was hardly a better toddler than myself.

I have but vague recollections of the exact reaction the small and obscure girl of hardly nine summers had on the day when she was told she was chosen to play in a film. But it brought her the first real thrill of her life, bringing a queer feeling of self-consciousness and importance. And so, at an age when other girls frisk about like fluttery butterflies, I broke into the movies In the role of Radha in 'Jaideb' (1926). It was those golden days of the silent screen, and after luck favoured me with an opening which many would die for, I had my interest sharpening with each and every role I was then called upon to interpret.

Music, if I may say so without being guilty of self-conceit, was in my blood. They also told me that I had a "face" that went well with the screen. As time wore on, I got used to the new life. I began to like this business of acting and take greater and greater interest, learning to express my emotions and sentiments through the medium of pantomime. I was an eager and willing pupil and my directors taught me all that I needed to feel and express those emotions correctly with liveliness. I am all too grateful to them.

Soon enough did the talkies come and with it still greater scope for me to act, speak and sing with a finer measure of life-like reality. It worked up my imagination grippingly. I experienced a far bigger thrill convulsing me when I discovered my "voice" not belying my own and other people's hopes. This gave me a more intense desire to study the art and to serve it better.


Things gradually settled down to the new order of the talking age. More and more studios came into existence turning out quite a number of pictures, in tune with the new requirements of the medium. Inspite of all the doubt and confusion that marked the early stage of the talkie, its experimental stage was soon over and people took the new order for granted. The notion that the talkie was but a photographed version of a conversationally rich stage-play or a musical drama soon passed. Producers and directors realised that a new technique had now to be evolved in which action and speech in a film play must be harmoniously blended. So that while characters would sing or talk or do anything in sound the scope for everything that he or she could do for the eye in the true style of pictorial motion must be artistically absorbed in the treatment. In short sight and sound were now wedded to each other. Of course, the scope for and need of good voice with depth and range now became intensified and acquired paramount importance in an artiste's career. Those with voices that were croaking or thin but had earlier made a name for their 'silent' acting had to say good bye to talkies.

As I said my own voice stood me wonderfully. I was thrilled to discover one fine morning that I had been acclaimed a 'star' by the public. It tickled my sense of importance. An obscure girl of yesterday, I now began to feel what it was exactly like to be a 'film' star, perched on a dizzy height of isolated glory. I had now mixed feelings of intense joy and fear. What if I could not make the permanent grade and stay put in my glorious popularity?

Ambition drove me almost crazy and I was resolved to maintain my stellar glory. A new determination came into me. Time began to shape me anew into the glorious thrill of womanhood. My worked-up feelings reached the deeper depths of my soul. That sense of divine dissatisfaction began to awaken in me. I was dazed....utterly dazed!

As I said my own voice stood me wonderfully. I was thrilled to discover one fine morning that I had been acclaimed a 'star' by the public
As an interpreter of film art, I now began to feel my position, my hold on the public mind as also my limitations. I now realised that a film artiste, however great and placed in whatever role, is out and out a creation of the film director. It is he who creates the artiste afresh on his own anvil every single time. In the roles we live it is they who make us live. They make capital use of our individual charm, our personality, our talents. We dwell In the dream-land they conjure up for us. They present us in terms of moving shadows. When that presentation of ourselves is accurate, you can almost feel our pulse, our soul. It is exactly here where the specialised technique of the movie-acting materially stands out from that of the legitimate stage.

However, faith and sincerity with an unswerving sense of "must" can move the mountain for a screen artiste. Otherwise, the stories of today's universally acclaimed filmstars being moulded out of indifferent starters of yesterday would not have been true.


Yes, sincere work and unflinching devotion to work are the necessary watch-word of my life. An artiste in order to serve film art truly and well must serve the director. How far a star is to succeed and prosper is largely conditional upon the director succeeding with the star. Beyond that an artiste cannot know, should not know. And a true artist can never have anything like the supreme satisfaction of achieving perfection. He or she must continually strive to be born anew within his or her artistic frame of mind. Or else, he or she ceases to be an artist.

Has an artist a separate entity as a man or a woman? I cannot say. I am a woman and a mother too. I have my happy home, my sweet hopes and my intimate desires around that. In building that home I spend much of my daily energy. But even then, standing in the cool of my evening of artist's life. I feel that once an artist, one is always an artiste. You cannot escape that glorious feeling. An artist can never have a decisive urge to quit unless he or she needs must do so for extraneous reasons. The artiste only changes his or her shade of role, passing from the mere romantic to other depths of characterization. It is more or less in the nature of a self evolution. But an artiste always loves to serve the art. To quit is beyond his or her. To die an artist is his or her highest tribute from life.

Cinemaazi thanks Sudarshan Talwar for sharing this rare interview published in Amrit Bazar Patrika.
The images added in the reproduction are from Cinemaazi archive.
546 views