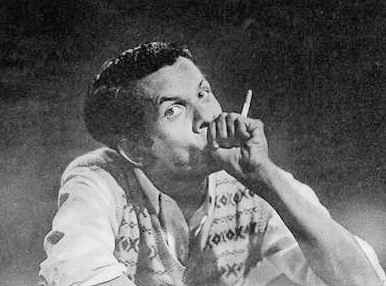 Though poor, Chaudhry Ramchand is happy until his house is invaded by his brother-in-law, Murlidhar (Johnny Walker), seen here.

​Chaudhry Ramchand (Balraj Sahni), a clerk, though poor, is happy until fate smiles on him and the Devil sends a brother-in-law.

While on the one hand he is promoted to the position of manager in his office and is nominated by his political party as its candidate for the elections, his peaceful home is invaded by his brother-in-law, Murlidhar (Johnny Walker).

Like the man who came to dinner on Christmas night and stayed on till Easter, Murlidhar is in no mood to be embarrassed by the hospitality of his good brother-in-law and makes it abundantly clear that he has come to stay — for good.


.
Murlidhar loses no time in asserting his fundamental rights as an honoured guest and relative. A full bottle of hair-oil, for instance, is consumed in giving the luxury-loving brother-in-law a body-massage. Even Ramchand’s cycle is whisked off one day and sold surreptitiously for a paltry sum by the all-powerful in-law, for he is sorely in need of cash.

With the in-law behaving like an outlaw, the house soon turns into a bedlam, and quarrels are the order of the day. Worried by the outrageous behaviour of his relative, Ramchand becomes indifferent to his work and he starts to lose the confidence reposed in him by his party and his employers.

Things take a serious turn when Ramchand discovers to his dismay that his honoured brother-in-law has started playing the cupid and has been encouraging a romance between his sister Urmila (Sheila Ramani) and Kanhaiya (Vijay Anand), the son of a wealthy Seth who incidentally is Ramchand’s political rival. Though he catches Murlidhar red-handed in the act of bringing about a meeting between the two love-birds, he doesn’t take action for fear of precipitating a domestic crisis.

One evening, as he is getting ready to go to a party-meeting, Ramchand is attracted by two street-singers on the pavement. Taking them to be beggars, he slips a coin into the palm of one of them. But he soon discovers that the pavement singers are none other than his esteemed relative and his bosom friend, Kanhaiya, serenading Urmila!

A few days later Ramchand is again duped by the looney twosome and in sheer exasperation, he complains to Kanhaiya’s father, but his political adversary turns a deaf ear and they quarrel.

Not content with the havoc done, Murlidhar steals five thousand rupees from Ramchand’s office to invest in a business suggested by Kanhaiya’s father, leaving sufficient evidence to involve Ramchand in the embezzlement. Ramchand’s job and honour are at stake unless he makes good the money or nabs the thief.

Though he is almost certain that the culprit is none other than his philandering brother-in-law, he finds it impossible to extract a confession from him. His suspicions, however, are confirmed when Murlidhar suddenly expresses a desire to leave. But Ramchand just cannot afford to allow his uninvited guest to leave in such unholy hurry—at least not till his investigations are complete.


In spite of the troubles brought about by Murlidhar, Ramchand suddenly becomes courteous to his in-law and makes much of him. Murlidhar tries to sneak out of the house, but his attempts are foiled by the vigilant Ramchand.

Just as Ramchand is about to throw his hands up in despair, Murlidhar agrees to admit his guilt in court on the specific understanding that as long as he remained in jail his family would be maintained by Ramchand. Ramchand readily agrees, but realizes his folly when he discovers the size of his in-law’s family which also includes a ‘joru-ka-bhai (brother-in-late) of Murlidhar.

With all the affection of a brother-in-law, Ramchand tells Murlidhar, “I have grown so fond of you of late that I cannot bear to see you go to jail. Please let me court imprisonment on your behalf.”

Murlidhar, the ‘joru-ka-bhar, grins mischievously and turns down the generous offer.

Cinemaazi thanks Sudarshan Talwar and Cinemaazi for contributing this review.
Images used in the article are taken from the original review.​