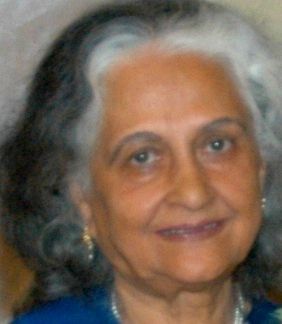 Bina Rai. Image Courtesy: Beete Hue Din
English  |   हिंदी
The 50’s decade witnessed the rise of talented actresses like Shyama, Nanda, Vyjayantimala, Nutan, Asha Parekh, Mala Sinha, Meena Kumari, Waheeda Rehman and Ameeta who started their career as a heroine in this decade and went on to mesmerize scores of fans with their talent and beauty. One of these actresses to foray into filmdom was the beautiful Bina Rai who was launched with producer-director Kishore Sahu’s film Kaali Ghata (1951). A career spanning 18 years, Bina Rai worked in merely 28 films. Sensing the turning tides of time, she gracefully sidelined herself from the glamour of the film industry. Then for more than 4 decades, she kept herself hidden from the media and her fans.


I wanted to interview Bina Rai for my column Kya Bhooloon Kya Yaad Karoon for the Weekly Sahara Samay. In the meantime, I had gotten to know through actor Chandarshekhar and actress Zahida, who lives in the same building as Bina and through many other prominent personalities of Hindi cinema, that Bina doesn’t like to meet outsiders especially anyone from the media. But I didn’t give up. I even spoke to her twice over the phone. She came on the phone both times and spoke to me very courteously; however, both the times she politely declined my interview request. It was natural for me to be disappointed. And then after a few months, things suddenly changed.

Around September 2005, Bina Rai’s son Prem Krishen’s company Cinevistaas started telecasting its T.V. serial Kohinoor on Sahara One channel. We know Prem Krishen as the hero of Rajshri Production’s hit film Dulhan Wohi Jo Piya Man Bhaaye (1977). In the serial Kohinoor I had played a very important role as the museum curator Ranjan Shrivastava. Prem Krishen and I went on to become acquaintances and thereon we would meet often at Cinevistaas’ Kanjurmarg studio during the shoot of Kohinoor. Thereafter in 2008 – 2009 I associated with Cinevistaas once again when I got the opportunity to write the dialogues for their T.V. serial Jaane Kya Baat Hui which was telecasted on Colors Channel.


One day during the shoot of Kohinoor I expressed my desire of interviewing Bina ji to Prem Krishen and he readily agreed to help me. He himself gave me all the information and answers to the questions that one asks during an interview. He also made my work very easy by providing the list of Bina’s films and her photographs. Now it was just a matter of simply waiting to meet Bina ji so that the write-up gets its stamp of authenticity. And one day out of the blue I got that opportunity.
I was pleasantly surprised to see Bina ji sitting on stage at the 47th Annual General Body Meeting of Cine & T.V. Artistes Association (CINTAA) on 20 November 2005. After many decades Bina ji was seen socializing with people on a public platform. Accompanying her was her younger son Monty. As soon as I got the opportunity, I went to meet Bina ji and introduced myself.  She immediately recognized me as she had already seen me in the T.V. serial Kohinoor. All the CINTAA members present in the general body meeting were impatient to meet with her. Despite people’s eagerness to meet her, I managed to have 5 to 7 minutes of formal conversation which was enough to give the write-up a stamp of authenticity. That write-up was published on 12 January 2006 in Dainik Jagran.
“I belong to a traditional Indian family. The sanskars installed by my parents have been deeply rooted in me. And this was the reason why in spite of being a successful actress I didn’t let the charm and glamour of this industry affect me. I have always stayed away from controversies. I completely understood the importance of family life, hence I didn’t hesitate even a bit to accept Premnath ji’s marriage proposal.”
Born on 13 July 1932 in Lucknow, Bina Rai’s father was an officer in railways.  Everyone in their household was fond of watching films. Bina’s favorite heroine was Khursheed. In the year 1950, the times famous producer-director and actor Kishore Sahu was looking for a fresh face for his film Kaali Ghata (1951). So he gave an ad in the newspapers inviting fresh talent. Bina used to study in the 12th standard at that time. According to Prem Krishen, Bina came to Mumbai with her brother and met Kishore Sahu, she auditioned and was chosen for the main role for the film Kaali Ghata (1951). This film was released in the year 1951. And it was Kishore Sahu who changed her real name Krishna Sareen to her screen name Bina Rai.


The other two actresses selected for other important characters for the film Kaali Ghata (1951) were Asha Mathur and Indira Panchal. Asha Mathur later on married producer-director Mohan Sehgal and Indira Panchal married into the illustrious industrialist Mahindra family. After the film Kaali Ghata (1951), Filmistan studio’s film Anarkali (1953) broke previous success records. In this film, Bina Rai’s male lead was Pradeep Kumar. Producer Bhagwan Dass Verma’s film Aurat (1953) was Bina Rai's first film with Premnath. Later on, this screen duo did many films together. During the film shooting they fell in love and they married each other before the release of the film in the year 1953.

During the meeting with Bina Rai at CINTAA’s General Body Meeting, one could clearly feel her qualms, a byproduct of having stayed within the confines of herself. She had said, “I belong from a traditional Indian family. The sanskars installed by my parents have been deeply rooted in me. And this was the reason why in spite of being a successful actress I didn’t let the charm and glamour of this industry affect me. I have always stayed away from controversies. I completely understood the importance of family life, hence I didn’t hesitate even a bit to accept Premnath Ji's marriage proposal.”

After her marriage, she produced films like Shagoofa (1953), Golkunda Ka Qaidi (1954), and Samundar (1957) along with her husband under the banner of P. N. Films. The husband-wife duo also acted alongside each other in these films. Maybe financial constraints were a very important reason why Bina continued her acting career while fulfilling her household responsibilities. That is why as soon as Premnath’s career stabilized with the film Teesri Manzil (1966), Bina immediately bid goodbye to films.

“I always molded myself according to changing times. I was never very ambitious and readily accepted whatever life offered me. Today I spend a peaceful life along with my son and daughter in law & with my grandsons & daughters and now I have even become a great grandmother...The peace one finds in living a simple life can’t be found anywhere else.”
Made in 1968, the film Apna Ghar Apni Kahani was Bina Rai’s last release after which she cut off all ties with the film industry and devoted herself completely to her family life. This film was initially named Pyaas. The music of the film was also released by the name of Pyaas. But during the screen release of the film, the title Pyaas was changed to Apna Ghar Apni Kahani.

Bina Rai’s son and Cinevistaas company’s owner Prem Krishen, who is a big name in the television industry today, tells us, “After retirement, mummy abstained from meeting anyone from the media or any of her fans along with any person unknown to her.  But after papa’s demise (Premnath), she imprisoned herself completely within the confines of her home”. Bina Rai spent the last few years of her life with her younger son Monty, an actor, and his family in South Mumbai’s Malabar hills famous Anita building. She passed away on 6th December 2009 in Mumbai.

During my brief conversation with her at CINTAAs General Body Meeting, she had said, “I always molded myself according to changing times. I was never very ambitious and readily accepted whatever life offered me.  Today I spend a peaceful life along with my son and daughter in law & with my grandsons & daughters and now I have even become a great grandmother. I relentlessly kept myself hidden from my fans and media only because I find no point in reminiscing about the past and re-living days that are long gone. The peace one finds in living a simple life can’t be found anywhere else.”