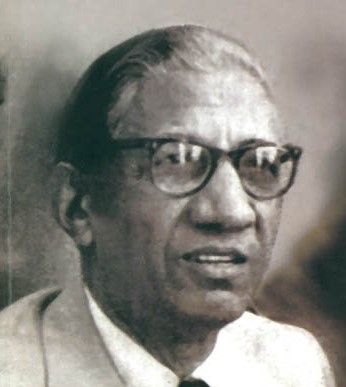 Pandit Sudarshan. Image Courtesy: Beete Hue Din
English  |   हिंदी
Haar Ki Jeet!... a novella which revolves around characters like Baba Bharti and his beloved horse Sultaan and the Daku Khadag Singh whose greedy eyes are glued onto sultan, this novella Haar Ki Jeet has the same place in Hindi literature as that classical compositions as of the likes of Munshi Premchand's Idgah or Chandradhar Sharma Guleri's Usne Kaha Tha. But unfortunately unlike well-known writers like Munshi Premchand, Chandradhar Sharma Guleri, and many others; the common man does not know much about Pandit Sudarshan or his creations like those of Haar Ki Jeet. While the fact is that just like Munshi Premchand, Pandit Sudarshan had also changed courses from Urdu writing to Hindi writing. In fact, another similarity between the two literary giants was that at one point in their careers they both had tried their hands at cinematic writing. The only difference being that while Munshi Premchand gave up on the charm and fascination of the cinematic world after his 1934 movie Mill Mazdoor, Pandit Sudarshan successfully and completely reigned over the magic that is movie-making. Many a time fanatic historians of Hindi cinema are also baffled to learn that the song that marked the beginning of playback in Indian cinemas was penned by none other than Pandit Sudarshan himself. In a career spanning almost two decades, Pandit Sudarshan delivered numerous hit films and songs one after the other and then ultimately bid goodbye to the glitz and glamour of Bollywood to once again completely immersed himself into the literature world of writing.

Born of a rich family in 1896 in Sialkot (now Pakistan) Pandit Sudarshan's real name was Badrinath Sharma. The second child among one sister and four brothers, Badrinath was only 10-12 years old when both his parents passed away. In spite of all the struggles he faced, he managed to complete his B.A. from Sialkot and went on to Lahore in search of work.  Fond of writing from a very young age, he started writing for an Urdu magazine Hazaar Dastaan in Lahore. At the tender age of 20-21, he married Batala from Gurdaspur who was a metric pass out, a very big achievement for girls in those days.  In view of his increasing marital responsibilities, Pandit Sudarshan started his own Urdu newspaper which captured a big portion of the market fairly quickly. Resulting in growing envy and jealousy among his peers who used money as a pawn to hinder the newspaper supply before it could even reach its eager readers. Consequentially the situation deteriorated to such an extent that it could not be controlled again and Pandit Sudarshan was forced to leave Lahore behind. At the same time in 1920 his first Hindi story Haar Ki Jeet which had appeared in Saraswati, a magazine published from Allahabad, gained much fame and was much appreciated by its readers.

In a recent meeting with Pandit Sudarshan's daughter Smt. Prabha Ramdev Kanagat it was revealed that in 1932 Pandit Sudarshan and his family migrated to Kolkata. During those days in Kolkata there many upcoming companies like New Theatres, Madan Theatres, East India Film Co., Pioneer Films, Barua Pictures, Radha Film Co., Durga International Films, B.I.Quality Films, Kali Films, and Bharat Laxmi Pictures were continuously involved in making Hindi films. The era of Talkie films had just started and good writers were in big demand. And in no time Pandit Sudarshan was showered with work. Ramayan was the debut film of his career which was screened in the year 1934. Produced under the banner of Bharat Laxmi Pictures Master Nagardass Nayak was the music composer of this mythological film and the cast comprised of Prithviraj Kapoor, Vitthaldass Panchotia, Dadabhai Sarkari, Devbala, Indubala, Rajkumari Nayak and Shehzadi. Apart from writing the story, screenplay and dialogues Pandit Sudarshan also directed the film along with Prafull Roy. In 1935, Pandit Sudarshan scripted his next Kunwai Ya Vidhwa which was screened under the banner of Bharat Laxmi Pictures where Prafull Roy and Pandit Sudarshan once again teamed up for this directorial venture. Master Nagardass Nayak gave music for this film and the cast comprised of Abdulla Kabuli, Zarina Khatoon, Shehzadi, Master Fida Hussain, Indubala, Kamla, R.P.kapoor and Durlabhram.  After this Pandit Sudarshan and Bharat Laxmi Pictures parted ways and he joined New Theatres.

New Theatres was a well-known company in that period which was famous for making musical social dramas based on literary works. Famed personalities like Pankaj Mullik, Raichand Boral, Kundanlal Sehgal, Mijjan Kumar, Debki Bose, K.C.Dey, Ratanbai, Pahadi Sanyal, Premankur Atorthy, Umashashi, Nitin Bose, Prathamesh Barua, and Kedar Sharma were it's in house artists. At this time playback recording hadn't been introduced and all the artists would sing live in front of the camera to record their songs. In 1935 New Theatres introduced the technique of playback recording in their film Dhoop Chhaon making it the first film in India to use playback. This song Mai khush hona chahoon khush ho na sakoon was composed by Raichand Boral and Parul Ghosh, Suprova Sarkar, Harimati and Chorus lend their voices for the same. All the 10 songs of the film Dhoop Chhaon were composed by Raichand Boral and Pankaj Mullik and all these songs were penned by Pandit Sudarshan out of which two songs sung by K.C.Dey, Baba mann ki ankhein khol and Teri gathri me laga chor musafir jaag zara are just as famous and popular to date.


Pandit Sudarshan's next Dhartimata (1938) was also produced under the banners of New Theatres. Released in the year 1938 this film was a big hit of its time. Pandit Sudarshan wrote all the nine songs of this film. Composed by Pankaj Mullik and sung by Sehgal, Umashashi and Pankaj Mullik, the film boasted of an impressive song collection including famous hits like Duniya rang-rangili baba, Mai mann ki baat bataoon, Kisne ye sab khel rachaaya and Ab mai kya karoon kit jaoon. But in spite of giving hits like Dhartimata (1938), Pandit Sudarshan had to leave Kolkata.

According to Smt. Prabha Ramdev Kanagat, many people could not digest Pandit Sudarshan's success and many intrigues were made against him. In the lurch, he shifted his base from Kolkata to Mumbai along with his family and joined Sagar Movietone where he got a chance to write the story-screenplay of the film Gramophone Singer (1938) which was screened in the year 1938. In 1940 he wrote six songs for Sagar Movietone's Kumkum The Dancer (1940) and the music for these songs were composed by Timir Baran.

In 1940 Pandit Sudarshan got the opportunity to work with music composer Khemchand Prakash for Ranjit Movietone's film Diwali (1940), although some songs of the film were also penned by Dinanath Madhok and Pyarelal Santoshi. Pandit Sudarshan got recognition while his stay in Kolkata, in Mumbai as well his social circle began to expand. Sohrab Modi, Producer-Director-Actor and owner of Minerva Movietone was a well-recognized name in those days.  He was so taken in by Pandit Sudarshan's body of work that when he decided to make the big-budget Historical film Sikandar (1941), he asked Pandit Sudarshan to write the story, screenplay, dialogues as well as handed him the responsibility to oversee all the research for the film. Released in 1941 the movie Sikandar was a big hit and the music and the songs of the film became very popular amongst the people. There total 7 songs in the film composed by Mir Sahib and Rafiq Gaznavi. The main leads of the film were Sohrab Modi, Prithviraj Kapoor, Vanmala, K.N.Singh, and Jillobai. This was actress Vanmala's first Hindi debut who had already started her career with a Marathi film Lapandaav in 1940. In 1941 Pandit Sudarshan wrote all the 11 songs for the film Padosi which was directed by V.Shantaram under the banners of Prabhat Film Co. Pune. The music was composed by Master Krishna Rao. After the phenomenal success of Sikandar, Pandit Sudarshan scripted 3 more films for Minerva Movietone called Phir Milenge (1942), Prithvi Vallabh (1943) and Pattharon Ka Saudagar (1944). Out of these Prithvi Vallabh and Pattharon Ka Saudagar were based on his own stories. He also wrote songs for Central Studios Parakh (1944), Prafull Pictures'  Subhadra (1946), Kuldeep Pictures Ltd.s Jaltarang (1949) and on producer M.Somasundaram invitation he went on to Madras. He spent the next two in Madras where he worked with M.Somasundaram's company Jupitar Pictures. He enthralled the audiences with Ek Tha Raja (1951) and Rani (1952) after which he bid adieu to movies and returned to Mumbai. And just like that Rani became his cinematic career last film.

Smt. Prabha Ramdev Kanagat says on Pandit Sudarshan's return to Mumbai he devoted himself completely to literature. He put to paper many plays and his stories like Sach Ka Sauda, Athanni Ka Chor, Cycle Ki Sawari, Teerth Yatra, Prithvi Vallabh, and Pattharon Ka Saudagar received much acclaim like his previously written Haar Ki Jeet. And the story goes that once Mahatma Gandhi especially invited him to Vardha and requested him to write books in Hindi to popularize the language and as soon as Pandit Sudarshan got the time he obeyed Mahatma Gandhi's wishes and did the same. And accordingly Pandit Sudarshan's creation Sabki Boli was included in the school syllabus and was taught in 4th standard for many years. This gifted author Pandit Sudarshan passed away at the age of 72 on 16th December 1967 in Mumbai.

Pandit Sudarshan is survived by 4 sons and a daughter. His eldest Vidyabhushan Sharma was a Co-Director with Sohrab Modi and his younger son Shashibhushan earned fame as a writer on movies like Professor (1962), Mohabbat Zindagi hai (1966), Anamika (1967), Pocketmaar (1974), Jalmahal (1980), Lawaris (1981), and Premgeet (1981). Unfortunately, his sons are no more. The lineage is carried forward by his daughter Prabha who is now 86 years old and stays at Mumbai's Juhu-Versova Link Road with her son Ashok Kanagat. Ashok is an Ad-film maker.

Pandit Sudarshan might have passed away 45 years ago and his name might not be familiar to the new generation but his writing was inspirational and awe stirring to the extent that his name will always be taken among with the legends of Hindi Cinema and Indian literature.

Pandit Sudarshan's daughter Smt. Prabha Ramdev Kanagat passed away on 12 May 2016 in Mumbai at the age of 90. May her soul rest in peace.