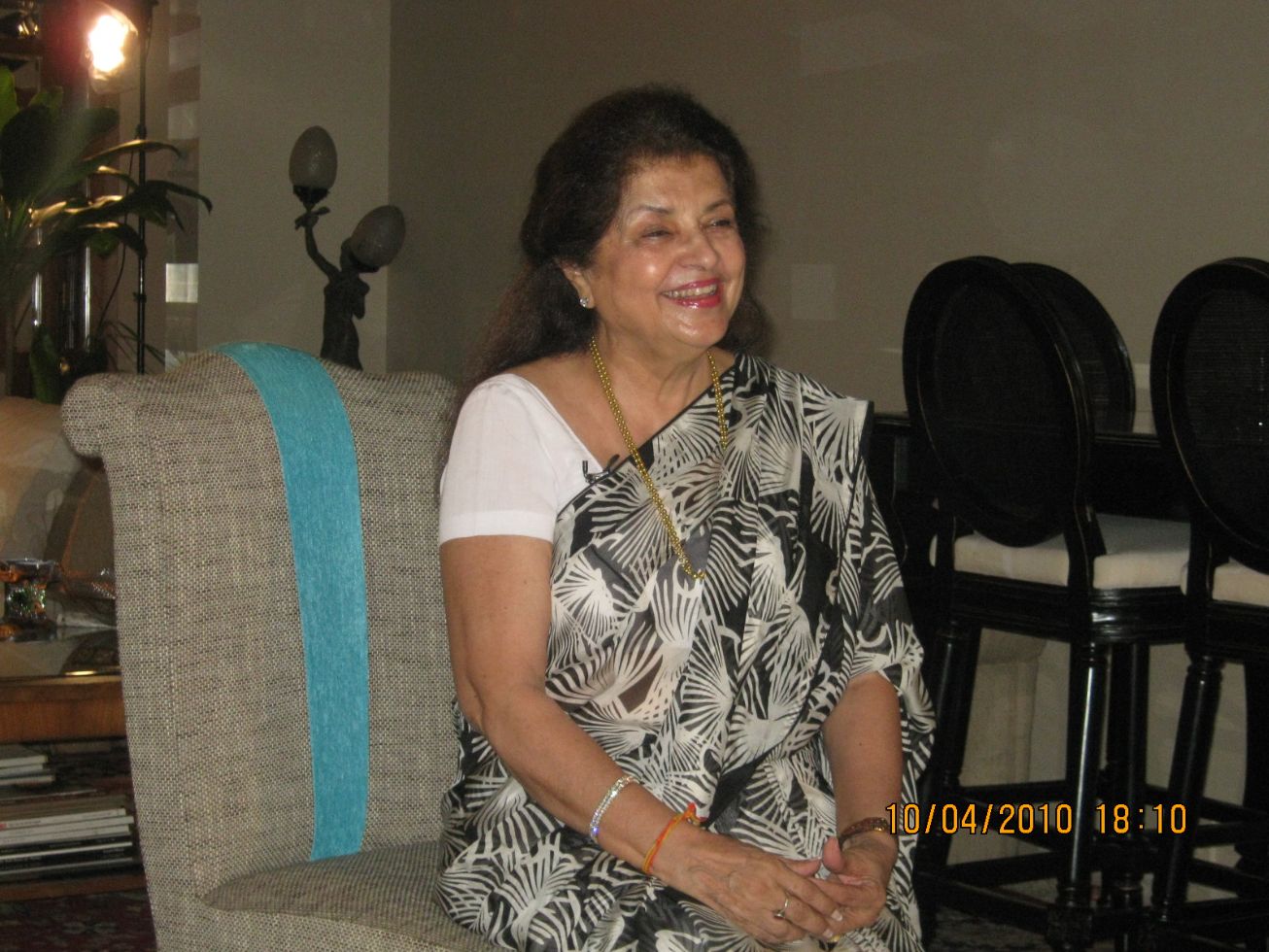 Sudha Malhotra. Image Courtesy: Beete Hue Din
English  |   हिंदी
There have been many playback singers like Lalita Deulkar, Sulochna Kadam, Mubarak Begum, Meena Kapoor, Jagjit Kaur, Madhubala Zaveri and Kamal Barot in the field of Hindi film music, their contribution is significant even in the limited work they did. With their talent they made a mark but soon they left this glittering world due to various reasons. Among such highly talented singers is the sweet voiced singer, Sudha Malhotra, who was active for just about 10 years but the songs she sang are fresh even today.

"I sang Noorjehan’s “tu kaun si badli me mere chaand hai aa ja” from the film Khandaan (1942) which impressed Master Ghulam Hyder to such an extent that he immediately said that I’ll earn lot of name and fame in forthcoming years. "

Sudha Malhotra was born in Delhi on 30 November 1936 and raised in Lahore, her hometown. She was the eldest among 4 siblings with 3 younger brothers. Sudha Malhotra says, “All of us at home had an inclination towards music. My parents encouraged me to learn singing after they saw my passion for music. At the age of 6, I got a chance to sing in a program in front of Master Ghulam Hyder, that too with his orchestra. I sang Noorjehan’s “tu kaun si badli me mere chaand hai aa ja” from the film Khandaan (1942) which impressed Master Ghulam Hyder to such an extent that he immediately said that I’ll earn lot of name and fame in forthcoming years. I started taking lessons from Deshbandhu Sethi ji in classical vocal while in Lahore and also started singing on All India radio. After the partition we shifted to Delhi where I started learning from Pandit Amar Nath”.

Sudha Malhotra’s father was an academician. He shifted to Bhopal after he got the Principal’s job there. According to Sudha Malhotra, all her maternal relatives were based in Mumbai thus she often visited the city since childhood. Composer Anil Biswas was her maternal uncle’s family friend. Anil Biswas once heard Sudha Malhotra sing and he was so impressed that he gave her a chance to sing in his film Aarzoo. Her debut song in the film Aarzoo, a 1950 release was a solo mila gaye nain which was picturised on Shashikala. Sudha Malhotra was just 14 at that time.

After recording the song she returned to Bhopal. Mila gaye nain was highly appreciated by the masses. According to Sudha Malhotra, she was offered many songs after the grand success of her debut song. She used to come all the way from Bhopal to Mumbai for the recordings and after finishing the job returned to Bhopal. This continued for 2-3 years but due to increasing work pressure, eventually, she had to permanently shift from Bhopal to Mumbai.

“Composed by Naushad Saheb, all the songs from the film Uran Khatola (1955)  were initially recorded in my voice. But my voice disappeared from the songs when the movie and the gramophone records released."

1950’s was a very busy decade in Sudha Malhotra’s career. Then she got married into the Motwani family, the owners of famed Chicago Radio. Sudha Malhotra says, “At that time, people connected with films were not looked up to and working in films was a taboo in respectable families. It was not easy for a newly wed daughter-in-law like me to continue with my singing career but there was one more big reason behind this denial from my in-laws. However out of respect towards the wishes of the elders in the family, I bid adieu to the film world. My last recorded song was a duet with Mukesh, tum mujhe bhool bhi jao to ye haq hai tumko for the 1959 release Didi. Though the composer for this film was N.Dutta, this particular song was composed by me. Thus my singing career which started at the age of 14 ultimately came to an end at the age of 23”.

Sudha Malhotra says, “Composed by Naushad Saheb, all the songs from the film Uran Khatola (1955) were initially recorded in my voice. But my voice disappeared from the songs when the movie and the gramophone records released. I also recorded a duet with Geeta Dutt, which was composed by Khayyam for a Chetan Anand movie. As the movie remained incomplete, the said song was later used by Yash Chopra in one of his films with the same tune and lyrics but with different voices. And, that song was, kabhi kabhi mere dil me khyaal aata hai. During those days I was a very busy singer and had gained a lot of recognition from the qawwalis in barsaat ki raat (1960), thus started a lot of conspiracies against me. I can’t say if there was any pressure on the company, but HMV which had a monopoly in the field of film music then did not release a single gramophone record of mine during that period.

According to Sudha Malhotra, apart from Anil Biswas, Sahir Ludhiyanvi also played an important role in shaping up her singing career. In a recorded interview, the recording of which is still in our possession, Sudha Malhotra says, “Sahir saheb wrote some very beautiful lyrics especially for me. After I got engaged, some of my pictures with Sahir Ludhiyanvi were published in the Blitz. I don’t know who was behind that all and what he or she intended to, but even though the Blitz later apologized, the publication of the pictures was one of the main reasons behind why I was not permitted to sing after my marriage. Had this not happened, maybe I would continue with my singing career after marriage as well”.

(While preparing this write up we again spoke to Sudha ji for the updates and she also supported us. But she flatly refused to talk on the Blitz controversy this time. Out of respect towards her feelings, we also didn’t insist on this issue.)

Even after leaving the film world, Sudha Malhotra kept her passion for music alive. She continued her “riyaaz”, gave stage performances, and taught music. After a gap of 24 years, on the behest of Raj Kapoor, she sang a duet ye pyaar tha ya kuchh aur tha with the singer Anwar in Raj Kapoor’s 1982 release Prem Rog which is her last recorded playback song as on today.

77 years old Sudha Malhotra resides in her bungalow on the 15th Road of Khar (West) with her son, daughter-in-law, and grandchildren. It’s been 4 years since her husband Mr. Girdhar Motwani passed away. Her son looks after the family business whereas daughter-in-law is busy with the editing and publication of renowned fashion magazines L'Official and Seventeen. Taking an account of singer Sudha Malhotra’s contribution to the field of Hindi Film Music, the Government of India has recently felicitated her with the Padma Shri Award – 2013.