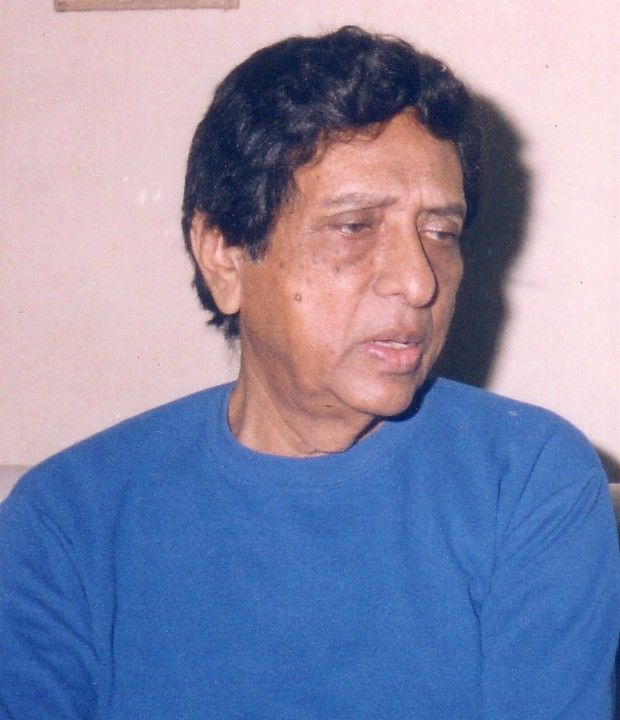 For the admirers of the golden era of Hindi cinema, namely films made till the 1960s decade, and especially of the black and white cinema, the name of the actor Chandrashekhar is not unfamiliar. At the beginning of his career for the first 10-12 years, he was seen onscreen in various small extra roles. And then suddenly his stars changed and he became a hero. For the next one and a half decades he did almost 35 films as the main lead and then went on to become a character artist. Though today his name may have faded from the memories of the audience, the 89-year-old Chandrashekhar still resides in Mumbai today and is quite hale and hearty as per his age.

Born on 7th July 1923 in Hyderabad and raised there, according to Chandrashekhar Vaidya his father Gaurishankar Vaidya was a well-known Ayurvedic doctor in Hyderabad. Despite Telgu being his mother tongue, Chandrashekhar Ji's entire education was done in Urdu-Farsi. Chandrashekhar Ji says, “I was very fond of wrestling and most of the time my opponent in the arena would be my close friend who went on to become famous as music composer duo Shankar-Jaikishan's Shankar Ji. This anecdote is of the 1930s and we were both teenagers at that time.”

In those days due to the Arya Samaj's revolution against the Nizam, a crackdown against the adolescents and the youth of the time had begun. Consequentially like all other youths, Chandrashekhar Ji had to leave Hyderabad and thus he ran away to Bangalore. Chandrashekhar Ji says, “In Bangalore, I wanted to try my luck at films but my Telgu was so bad that the studio people advised me that I would be better to go to Mumbai and to try my luck in Hindi films. And in the year 1941, I came to Mumbai. Thus my search for work started. One day while walking on the street a gentleman asked me, 'Do you want to be a hero?' I answered 'yes' and he took me with him and placed me in the crowd with the junior artists who were called extras at that time. That gentleman used to supply extras (junior artists) in movies. In the evening after pack up, I got 1 rupee and 50 paise and then this process kept going on. After some days I was promoted to what we called a decent extra and my salary increased to 8 rupees per day.”

At this time actors were being employed at producer-director W.Z. Ahmed and his wife Neena's Shalimar Studio situated in Pune. According to Chandrashekhar Ji at Shamshad Begum's insistence, with whom he had sung a song as a chorus singer, he was employed at Shalimar Studio at a monthly salary of 600 rupees. This incident took place in the year 1945. At Shalimar Studios he got the opportunity to work with many talented people like Josh Malihabadi, Akhtar-ul-Iman, Krishan Chander and Pt. Bharat Vyas.

Chandrashekhar Ji says, under Pt. Bharat Vyas's direction I did the film Rangila Rajasthan (1949) as a side hero, whose main lead was Bharat Bhushan. I was also the assistant director for the film. I also acted in Shalimar Studio's film Prithviraj Sanyukta which was released in the year 1946. The main leads of the film were Prithviraj Kapoor and Neena. But at that time due to partition of the country, W.Z.Ahmed and Neena migrated to Pakistan and Shalimar Studio was shut down.


With Gandhi’s assassination in 1948, riots were sparked against the brahmin's in Maharashtra. Hence Chandrashekhar Ji was forced to leave Pune for Mumbai where once again he had to start afresh. He met director Keshavrao Date at V Shantaram's Rajkamal Studio and on his recommendation, Chandrashekhar Ji got a job at Rajkamal. Chandrashekhar Ji not only worked in two films of the banner Apna Desh (1949) and Dahej (1950), he also learned to edit there. But due to some personal issues, he soon left that job.

"Film Bebus proved to be very important for my career. After seeing my work in this movie I once again received a call from Rajkamal and eventually, V.Shantaram signed me as the lead for his film Surang (1953)."

Once again Chandrashekhar Ji was in search of work. Producer R.Chandra, elder brother of actor Bharat Bhushan, was making the film Bebus (1950) under the direction of Bhagwan Hajele and its shooting was taking place at Lucknow's Ideal Studio. On his close friend, Bharat Bhushan’s insistence Chandrashekhar Ji went to Lucknow. He not only worked as an assistant director in the film Bebus he also essayed an important role in the movie. Featuring Bharat Bhushan and Purnima in the main roles the film was released in the year 1950.

Chandrashekhar Ji says, “Film Bebus proved to be very important for my career. After seeing my work in this movie I once again received a call from Rajkamal and eventually, V.Shantaram signed me as the lead for his film Surang (1953). The shooting of the film commenced in Kolhapur. Ulhas was playing the role of a mine owner and I was playing the role of a labour union leader. One day Shantaram shouted at me very badly in front of the whole unit. I couldn’t understand why he had done so. I had felt very insulted and was very angry, but after being counselled by Bharat Bhushan Ji I had to retract my decision to leave the film. Later on, Shataram Ji explained to me that he had shouted at me so that I would get angry and as per the scene’s requirement I would have the right expressions of anger on my face.”

Chandrashekhar ji says, “In film Bhala Aadmi's song Hamse karega jo muqaabla maar khana padega… I had to dance with two wrestlers after they win a competition. I didnt know how to dance that's why Dada Bhagwan had no choice but to place me on a wrestlers shoulder and shoot the entire song. I felt very ashamed at my drawback. But I took this weakness as an opportunity and started learning dance and soon enough my name was being counted among the good dancers. As a producer-director, I made two films Cha Cha Cha (1964) and Street Singer (1966) and in both the films I was a dancing hero.”

"But I took this weakness as an opportunity and started learning dance and soon enough my name was being counted among the good dancers."


Even after leaving acting Chandrashekhar Ji was associated with many associations like Cine Federation, IMPPA, Indian Film Directors Association, CINTAA, Film Writers Association, Sur Singaar Sansad which worked in favour of people attached with the film industry. And then finally he took complete retirement. His wife passed away a few years back and since then he lives alone in his bungalow Bhav Deep situated at Andheri (West)s V.P.Road. His son and daughter stay close by and take good care of their fathers every need.