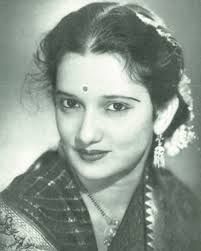 In the 1940s, a new singer-actress stepped into Hindi cinema. She not only played the main lead in two different films opposite then superstars Mazhar Khan and Trilok Kapoor but also sang in them. In spite of instant recognition as a melodious singer and a talented actress, she soon bid adieu to the films and devoted herself to Hindustani Classical Music. That Sushila Rani Patel is a highly respected name in the field of classical singing today.

I first met Sushila Rani Patel in the 2nd week in January 2006 at her Pali Hill bungalow Girnar for my column Kya Bhooloon Kya Yaad Karoon and her interview was published in Sahara Samay on 21st January 2006. The second time I met her was at composer Naushad's Carter Road bungalow Ashiana on the occasion where Carter Road was being renamed as Composer Naushad Ali Road on his first death anniversary on 5th May 2007.

Sushila Rani was born on 20th October 1918 in a Chitrapur Saraswat Brahmin family of North Karnataka. Her father was a practising advocate at Chennai High Court. Sushila Rani says, “Music was in my blood as my mother was a good singer. I played the records of Ustad Kareem Khan, Pandit Onkar Nath Thakur and Ustad Fayyaz Khan and tried to copy them ever since I was a kid which led to strengthening the hold on my musical notes. I got my first chance to sing on All India Radio in the year 1938”.

Sushila Rani was a bright student. She passed her M.A. and L.T. degrees in first class and then shifted to Mumbai in the year 1942. She says, “Apart from singing, I had a passion for writing and the reason behind my coming to Mumbai was to become a journalist. I met renowned film journalist Baburao Patel who was the editor of the film magazine Film India. He immediately hired me as the sub-editor in his magazine. But he was more impressed with my singing and it was through him that I reached H.M.V”. A number of Sushila Rani's non-film and classical records came into the market and were appreciated during that period.

Sushila Rani says, “After my marriage with Baburao Patel, I bid adieu to the films and devoted myself completely to classical singing. I duly started taking music lessons from Padm-Bhushan Mogubai Kurdikar, Ustad Alladia Khan and Sundarabai Jadhav and learned Classical singing, Khyaal singing and light music. Since then I have been continuously presenting singing programs on Akashwani and Door Darshan along with many music festivals which include Tansen Samaroh, Prayag Sangeet Samiti Samaroh, Pandit Onkar Nath Thakur Sangeet Samaroh”.

Today, many of Sushila Rani Patels disciples including Preeti Uttam, Shrawani Mukerjee, Shobha Bhave, Radhika Nayak and Sujata Moghe have successfully made a name for themselves in the field of music. She has been a member of central governments music advisory board, the Film & T.V. Institute (Pune) and the Censor Board. She has also been honoured with Maharashtra Rajya Sanskritik Puraskar and the titles of Sur Shri, Suswarvani, Sangeet Saraswati, Swar Kaumudi by some of the country's well-known organizations. She has also been honoured with Sangeet Natak Academy Award by the then-president Dr A.P.J. Abul Kalam.

With encouragement from Baburao Patel, Sushila Rani Patel passed L.L.B. and then L.L.M. with first division marks at the age of 61 and her name is still registered as an advocate in the Mumbai High Court. She is also a successful homoeopath. Completing 96 years of age in coming October, Sushila Rani Patel attended the release function of Gujrati's well-known writer Shri Biren Kothari's book on the 1930s & 40s renowned film company Sagar Movietone which was held in the month of February 14.
Sushila Rani Patel's husband Baburao Patel died on 4th September 1982. She has been living alone in her huge Girnar bungalow since then.