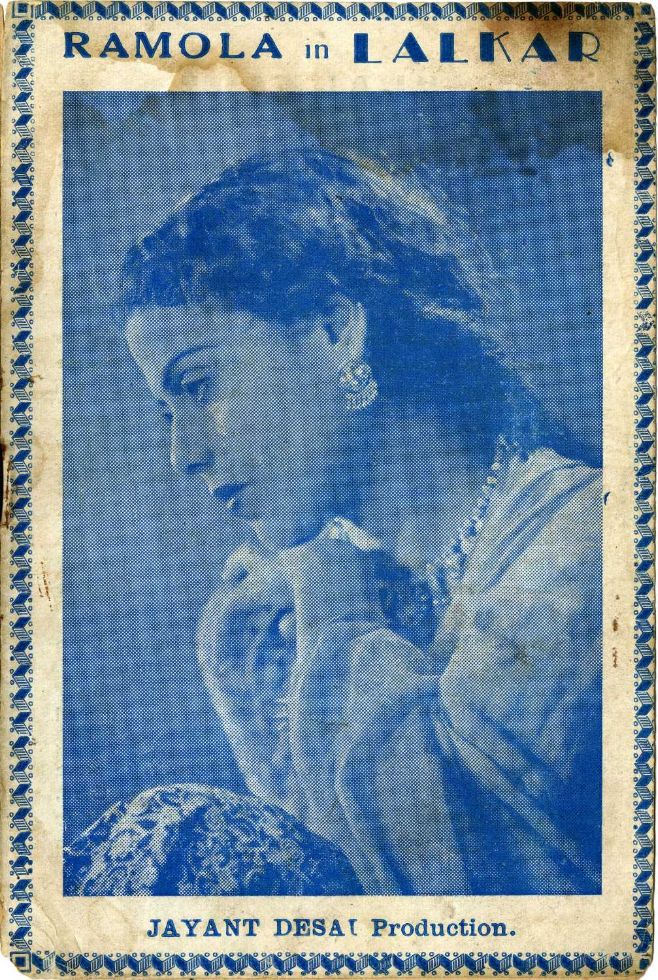 This is another from the crop of propaganda stories grown in the back-yard of our studios for official purposes. As the subjects of such stories are always approved with the minutest scrutiny by the authorities, the studios are not so much to be blamed if these stories lack imagination, intelligence or entertainment. It seems that in their hurry to get rid of their obligations, producers are doling out any stuff under the pretence of propaganda. And Lalkar is just any stuff.

This is a story with the literacy campaign as its theme, and the clumsy way in which it is executed will not help to make a single convert to literacy in the country. Gyanprakash, a young man is travelling to Suryapur to introduce in his village a campaign of literacy. In the train he meets the Thakore Saheb of Suryapur, who promises to help him in all his praise-worthy activities. However, when Gyan comes to Suryapur he meets Mira, who is presented as the concentrated symbol of absolute illiteracy. Mira is a wild tomboy of the village and as such is shown as having been given the freedom of the town to do anything she likes. She teases Gyan for a time and then falls in love with him. Gyan is now trying to teach Mira and other inhabitants how to read and write and at this stage the usual Zamindari complex is introduced through the manager of Thakore Saheb who is named Yamaraj. This Yamaraj is essentially a bad man who believes in tyrannising over the population of the ThakoreSaheb who, as usual, is shown to be a good-hearted fool interested in hunting wild animals. Yamaraj is moreover interested in Mira and hopes to win this girl's favour in one way or other.

With these usual characters all introduced in the picture, the usual drama which we have seen so many times before is created. Gyan, the hero, tries to do some good in which Mira, the heroine, helps while Yama-raj, the villain, obstructs without the knowledge of the Thakore Saheb. A small emotional twist is introduced by permitting Maya Banerji to give Ramola a few stabs of jealousy. One after another the usual sequences take place till Yamaraj makes it very hot for the hero and the heroine finds some way to bring the whole thing to the notice of the Thakore Saheb from whom she demands justice. The villain is exposed and banished and the heroine handed over to the hero to make her his own. And there ends the story which has pretensions of being called a powerful propaganda picture for spreading literacy amongst the masses. We hope it converts at least one person in 40o millions.

The idea of the story is as primitive and amateurish as perhaps the knowledge of Mr. Evelyn Wood about this country. If Evelyn Wood had seen Indian pictures he would have discovered that this very same story has been produced on the Indian screen over 500 times before during the last 30 years.

From the players, Mubarak gives a pretty good performance as the Thakore Saheb of Suryapur, who is shown as a good-hearted fool who goes hunting in the deserts without knowing what is going on near him. Ishwarlal in the role of Gyan gives his umpteenth performance as usual. Ramola, with her aged face, as the heroine does the very same antics which she did in Manchali (1943). Maya Bannerji looks just awful.

The production values of the picture are mediocre in sound and photography. The music is not so bad and a couple of tunes do attract attention. The songs of Pandit Madhur belie his name and his words prove jarring to the ears. Some of the dialogues of the picture are undoubtedly witty, but they could have been even more forceful than at present. The direction of Jayant is in par with his usual work in such plots. In conclusion Lalkar is not at all a bad time-killer if you are not looking out for anything intellectual in it.

This review was originally published in Film India magazine. The image used was not part o the original article.