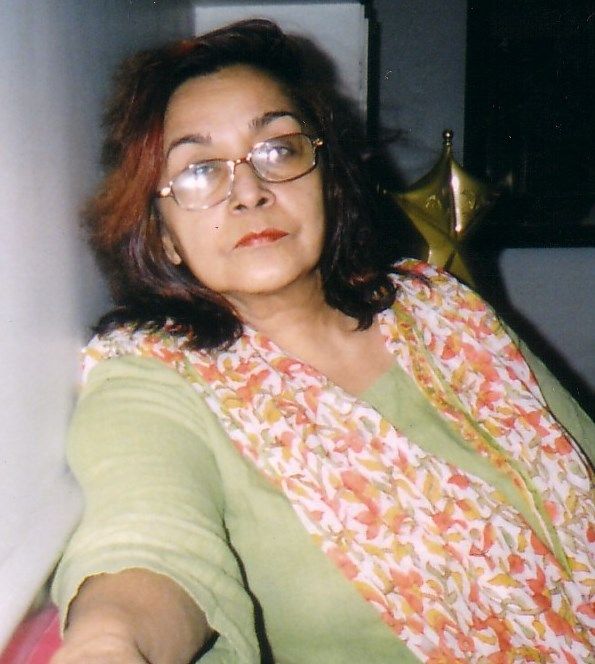 Ameeta. Image Courtesy: Beete Hue Din
English  |   हिंदी
Filmistan’s 1957 release hit film Tumsa Nahin Dekha not only gave a new ‘The Dancing Hero’ image to Shammi Kapoor but also made Ameeta a star, who was seen in comparatively serious and not so important roles before the release of Tumsa Nahin Dekha (1957).  In a career spanning 22 years, Ameeta acted in 50 films and then gracefully bid adieu to the film world. Years later, Ameeta once again came out in public when she was honoured with the Lifetime Achievement Award by the Cine & TV Artistes Association (CINTAA) on 20 November 2005. Another star who was seen socializing with people on a public platform viz. the same CINTAA annual general meeting after decades was Beena Rai. I had the chance to meet both these actresses in the same AGM. I requested Ameeta Ji for an appointment and a few days later I was at her home at the right time that was fixed for the interview. Ameeta’s debut movie as heroine was again a 1953 release Shri Chaitanya Mahaprabhu which was produced by Prakash Pictures and directed by Vijay Bhatt. Ameeta’s hero in this movie was Bharat Bhushan. Ameeta says, “My real name is Qamar Sultana, my mother fondly called me Indira, my friends call me Indu whereas in Thokar (1953) I was introduced with the screen name ‘Jayjaywanti’. The screen name ‘Ameeta’ was given to me after Vijay Bhatt published an advertisement in newspapers and asked readers to suggest a name for the heroine for his upcoming movie Shri Chaitanya Mahaprabhu (1953).
(According to Ameeta Ji, his debut movie as an actress was 1953 release Thokar. But as per her filmography provided by well-known film historian Shri Harish Raghuwanshi ji (of Surat) and the Hindi Film Geet Kosh: part-2 compiled by Shri Harmandir Singh ‘Hamraz’ Ji (of Kanpur), she had already acted in 2 films Kaafila and Anmol Sahara in the year 1952 i.e. even before the release of Thokar. Since her name in the credits of these films appears as Ameeta, it seems that she signed these movies after signing ‘Shri Chaitanya Mahaprabhu’ but they released first.)

The failure of Shri Chaitanya Mahaprabhu (1953) adversely affected Ameeta’s career. Constrainedly she had to accept some B and C graders like Amar Kirtan (1954), Badal Aur Bijli (1956), Baaghi Sardar(1966), and Indrasabha (1956). But her career took a positive turn after Saira Bano’s mother and a star of her times Naseem Bano introduced her to Filmistan Film Company’s head Shashadhar Mukerji. Ameeta says, “After playing side roles in Filmistan’s Aab-E-Hayat (1955), Munim ji (1955) and Hum Sab Chor Hain (1956), I was chosen for the lead role opposite Shekhar in Abhimaan (1957). Then I did Zamana (1957) opposite Kamaljeet and then in the same year i.e. 1957, Tumsa Nahin Dekha’s record success made me a star”.
“That was the time when a new generation of actresses was entering the film world. To stay in the competition had become very hard. In such circumstances, I had no other option than to turn to character roles ..."
Ameeta got a chance to act with her favourite actress Madhubala in producer-director Aspi Irani’s movie Shirin Farhad (1956). This was made in the year 1956 and Ameeta always considers it the biggest achievement of her life. On the other hand, the year 1957 proved to be the most important year of her career as besides Tumsa Nahin Dekha (1957), producer-director Amiya Chakravorty’s Dekh Kabira Roya (1957) also became a big hit. After playing the main lead in movies like Talaash (1957), Sanskar (1958), Raj Sinhasan (1958), and Aangan (1959), she witnessed another great success in Goonj Uthi Shehnai (1959) which took her career to the new heights. But this success didn’t last very long.


Ameeta Ji's interview took place at her residence at the Seven Bungalows area at Andheri (West). Her mother Shakuntala Devi and daughter Sabeeha were present during our conversation. Sabeeha also acted in a couple of movies viz. Anokha Rishta (1986), Baap Numbari Beta Dus Numbari (1990), Jai Vikranta (1995), Khiladi (1993) and Zaalim (1994) in the 1980s and ’90s. But soon she bid adieu to the films and made a respectable place for herself in the field of jewellery designing.

Ameeta Ji still resides at the same place. According to the sources close to her, Shakuntala Devi passed away a few years back and Sabeeha is serving with an airline in some Gulf country. I wanted to contact Ameeta Ji once again to get the updates but after I came to know that she avoids talking to media now, I decided not to bother her.
Ameeta Ji is going to complete 80 years on coming 11 April.