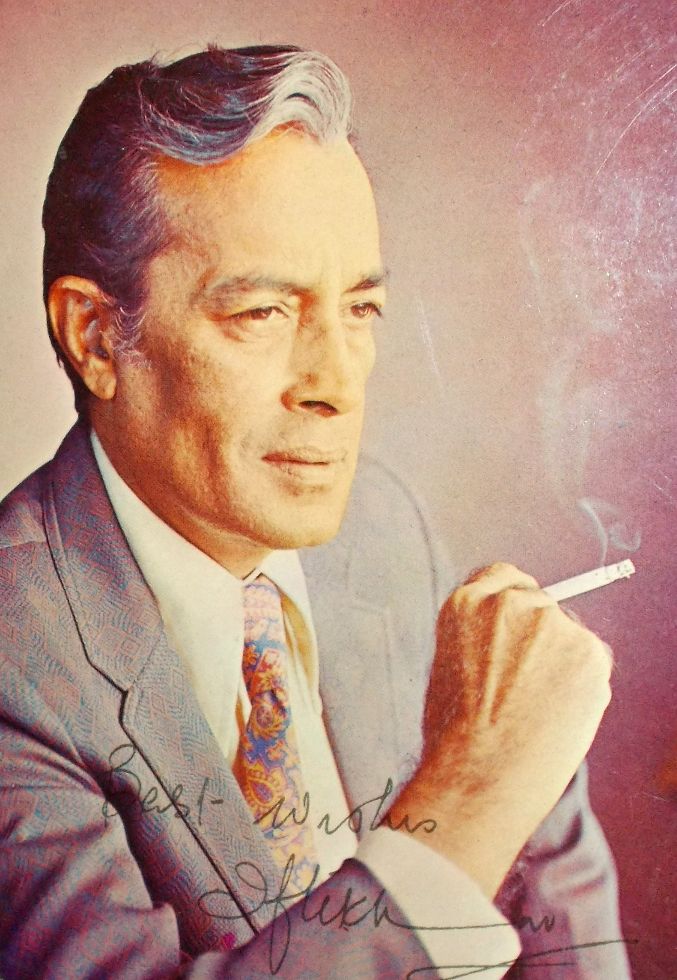 Iftekhar. Image Courtesy: Beete Hue Din
English  |   हिंदी
He had a passion for singing and was so impressed with K L Saigal that he dreamt of becoming a singer of Saigal’s stature.
Sayyadana Iftekhar Ahmed Shareef, a superfine actor who is known to us as Iftekhar. This name reminds us of a police officer often seen on the silver screen. But perhaps the film buffs are not aware that the same Iftekhar was not only a wonderful singer and painter but he also played the main lead in a couple of movies initially. Recently we met Iftekhar Saheb’s daughter Salma who spoke about her father to us in detail.

Originally from Jalandhar, Iftekhar’s father was in a top position in some company in Kanpur. Eldest among four brothers and one sister, Iftekhar was born on 26 February 1922 in Jalandhar and his childhood was spent in Kanpur. After completing his matriculation, he did a diploma course in painting from Lucknow College of Arts. He had a passion for singing and was so impressed with K L Saigal that he dreamt to become a singer of Saigal’s stature. Since all the big music companies of that time were based in Kolkata, Iftekhar came down to the city at the age of 20.


In those days, renowned composer Kamal Dasgupta was serving for HMV (Kolkata). He had already composed for Kolkata based M. P. Production’s 1942 release Jawaab. The song is sung by Kanan Devi toofan mail, duniya ye duniya toofan mail of that movie continues to be famous even today. Iftekhar passed the audition test taken for HMV by Kamal Dasgupta. The company released a private album with two songs sung by Iftekhar, who, then returned to Kanpur. A few days later, he received a telegram from M. P. Production in which he was called immediately to Kolkata. In fact, Kamal Dasgupta was so impressed with Iftekhar’s elite personality and sophisticated language that he recommended his name to M. P. Production and asked the banner to give Iftekhar the job of an actor.


While in Kanpur, Iftekhar had been engaged with a girl named Sayeeda. When called by M. P. Production he reached Kolkata and joined the company. But no film of Iftekhar’s could take off for long under the banner of M. P. Production. During those days in Kolkata, he fell in love with Hannah Joseph, a Jewish girl living in his building. He severed ties with Sayeeda and married Hannah. After marriage, Hannah Joseph was rechristened as Rehana Ahmed.

Iftekhar’s debut film was 1944 release Takraar  which was made under the banner of Art Films-Kolkata. The heroine of this film was that time star actress Jamuna. In the year 1945, there released two of Iftekhar’s movies titled Ghar and Rajlaxmi respectively with Jamuna and Kanan Devi in the main lead. Rajlaxmi, which was made under the banner of M. P. Production was also the debut movie of Talat Mahmood as a singer as well as an actor.  Iftekhar was then seen in the movies Aisa Kyon (1947) and Tum Aur Mai (1947). Meanwhile, his elder daughter Salma was born in the year 1946 and the younger one in 1947 was named Sayeeda.


"In spite of being many years older than Iftekhar, Ashok Kumar always considered him as his painting guru. Iftekhar’s caliber as a painter is proved by the background paintings he made especially for the title song of the movie Door Gagan Ki Chhaon Me."
Many of Iftekhar’s close relations including his parents and siblings migrated to Pakistan. Iftekhar preferred to stay in India, though due to riots he was forced to leave Kolkata. He, along with his wife and daughters came down to Mumbai in the year 1948 and stayed in Hotel Evergreen at Khar. Once again the life had come to zero and the struggle started again but it was not easy to find the work. Salma ji says, “We, the sisters, were still toddlers, and often there was nothing to eat at home. Ultimately my mom had to work as a secretary to one Mr. Patanwala to fulfill the basic household needs. Whereas, daddy continued with whatever small or big work he got but our financial conditions did not change much.”


While in Kolkata, Iftekhar was once introduced to Ashok Kumar by Kanan Devi.  After reaching Mumbai, Iftekhar met Ashok Kumar at Bombay Talkies. Ashok Kumar, not only recognized Iftekhar but also gave him an important role in Bombay Talkies’ 1950 release Muqaddar, the central characters of which were played by Sajjan and Nalini Jaywant. Ashok Kumar later learnt painting from Iftekhar. In spite being many years older than Iftekhar, Ashok Kumar always considered him as his painting guru. Iftekhar’s caliber as a painter is proved by the background paintings he made especially for the title song of the movie Door Gagan Ki Chhaon Me (1964).


Salma ji got married in the year 1964 to Mr. Vipin Chandra Jain who was from a very rich family from Dehradoon. Vipin Chandra Jain had come to Mumbai to join Hindi films as an actor and this was his love marriage with Salma ji. Vipin Chandra’s grandfather, the renowned entrepreneur Rai Bahadur Ugrasen Jain had been the chairman of Dehradoon Municipal Corporation as well. After her marriage, Salma ji shifted to Dehradoon with her husband. She spent 15 years in Dehradoon where she taught English in a college. Meanwhile she became the mother of a son and a daughter but eventually had to come back to Mumbai after her divorce from her husband in the year 1979. For the next 20 years she looked after producer N. C. Sippi’s office as his secretary and the manager.


Salma ji says, “even after all our family members shifted to Pakistan, we remained in touch with them. My elder chachaji (late) Mr. Imtiaz Ahmed was a famous actor on Pakistan T.V. who was honored with the National Award by Pakistan Government. The younger chacha Mushtaq Ahmed was a pilot with Pakistan International Airlines and is now settled in the US. Daddy’s only sister Shamim aunty lived in Karachi but she is no more now. Youngest Iqbal Ahmed chacha who was daddy’s stepbrother and his wife are doctors and they also reside in US. During one of my Pakistan journey, I also met Sayeeda in Rawalpindi, the same girl who was once engaged to daddy in Kanpur. I still remember the warmth with which she met me and it was really emotional to know that she had decided to remain unmarried forever. Yes, she never married.”

Iftekhar’s younger daughter Saeeda’s husband M. I. Sheikh stays in Juhu, Mumbai. He was a manager with CEAT tires and has two kids with Saeeda.  One day Saeeda was detected with cancer. She bravely fought with the ailment for five years but lost the battle on 7 February 1995. It was really hard for Iftekhar to cope up with the daughter’s demise. Eventually, his diabetes suddenly shot up very high. He was admitted to the Suchak Hospital in Malad (East) but his condition kept on deteriorating and he passed away on 1 March 1995, exactly after 24 days of his daughter’s death.

Our meeting with Salma ji took place in the evening of 15 April 2013 at her residence situated at Seven Bungalows area of Andheri (West).  Mr. Gajendra Verma, the renowned and very senior theatre person, was also present during the said meeting and was there in Mumbai for a few days for some personal work. Salma ji said that her daughter is married and settled in London. Salma ji’s son Vishal Jain resides in Mumbai but at that time he was in Dehradoon for some family-related work. Salma ji introduced us to her mother Smt. Hanna Joseph alias Rehana Ahmed. 90 years old Smt. Rehana Ahmed was very ill for some time. Recently Salma ji called us and informed that her mother passed away on 27 May 2013 which was indeed tragic news.